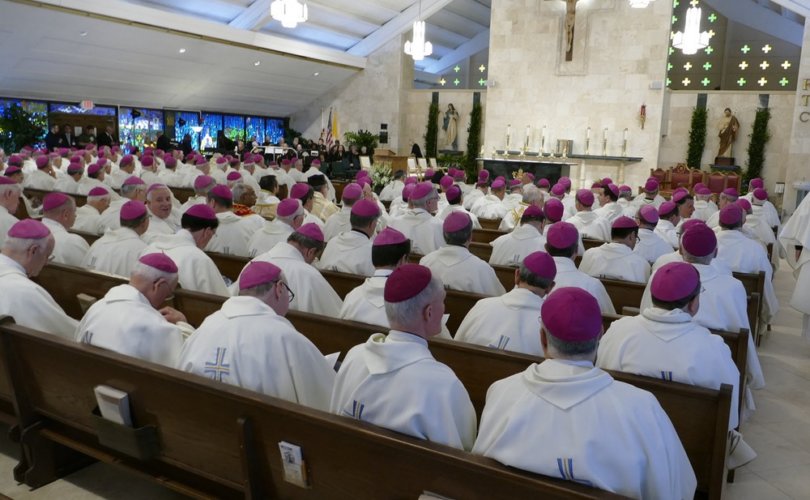 The U.S. Bishops gather for Mass at their Spring meeting in June 2018.Lisa Bourne / LifeSiteNews

COLUMBIA, South Carolina, July 31, 2018 (LifeSiteNews) – A prominent Catholic academic has written his bishop to say he will no longer support diocesan collections unless the bishop publicly commits to “zealously” investigate the cover-up of now-former Cardinal Theodore McCarrick’s sexual misconduct.

Dr. Christopher Tollefsen, professor of philosophy at the University of South Carolina, published the letter July 30 at First Things in the hope it could serve as a template for other Catholics. Withholding diocesan contributions, he notes, would “bring to bear one of the only effective forms of influence over the bishops that is available to us.”

“The McCarrick scandal has left us more than unsettled, and indeed, more than angry,” Tollefsen wrote to Charleston, South Carolina Bishop Robert Guglielmone.

McCarrick’s “disgusting and wicked” actions aren’t even the main concern, he says. Rather, it is the bishops’ failure since at least 1994 to do something about McCarrick in the face of “complaints, warnings, accusation and petitions,” thus enabling “McCarrick’s rise to become one of the most prominent and influential American bishops.”

“These facts force us to conclude that those charged by Our Lord with leading His Church, teaching the faith passed down from His apostles, and shepherding His faithful, have been gravely, grossly negligent,” Tollefsen writes. “That negligence has had grave consequences for the victims of McCarrick’s abuse; a Church that should have protected Her children, and Her seminarians, instead betrayed them.”

Tollefsen then explains to his bishop that “after prayer and discernment” his family will not contribute to diocesan appeals for money until they “are convinced by his public witness and actions” that Guglielmone is working toward specific action to address the hierarchy cover-up element of the Church’s sexual abuse crisis revealed by the recent wider exposure of McCarrick’s reported abuse.

Bishop Guglielmone is currently out-of-state on vacation, according to a diocesan media relations representative, who said staff was unaware if he has seen the letter. The representative also tells LifeSiteNews that the bishop will give Tollefsen’s letter his attention when he returns to the diocese in mid-August.

News broke June 20 of “credible and substantiated” allegations against McCarrick of abusing a minor decades ago. McCarrick was removed from public ministry in June owing to the allegation he sexually assaulted a 16-year-old altar boy in 1971.

Since the news of McCarrick’s removal from ministry, a stream of additional varying and sordid McCarrick allegations have been underscored by a flow of reports that whether in Church or media leadership, “everybody knew” about “Uncle Ted.”

No action from the bishops, but we keep getting new cardinals

Myriad reports from those who suffered, witnessed, or heard about the now disgraced cardinal’s bizarre and abusive behavior with young boys, seminarians and priests over decades failed to produce action from the U.S. Church’s bishops or the Vatican.

In one recently surfaced account, James, now 60, says McCarrick first abused him in 1969 when he was 11 and McCarrick was a 39-year-old priest, the abuse lasting for 20 years.

McCarrick, who raised millions of dollars for the Vatican, was a prominent and powerful Church figure past his 2006 retirement, as he continued in high-profile appearances and influential activities on behalf of the Church.

As the McCarrick scandal has continued to expand, Pope Francis accepted McCarrick’s resignation from the College of Cardinals Saturday – the first U.S. cardinal to step down over sex abuse allegations. He has been ordered to a “life of prayer and penance,” and not been laicized pending a Vatican trial.

Who knew? Who benefitted?

The questions of who among the U.S. Church hierarchy knew about McCarrick and when they knew it persist, and some high-level U.S. prelates continue to say, they were unaware.

With the McCarrick scandal also shedding additional light on the issue of homosexuality among Catholic clergy, speculation also continues that the cover-up is tied to a deep power network within the Church largely dependent upon priests fallen to sexual sin.

Questions have also been raised about who among the U.S. Church’s episcopate benefitted from any relationship to or with McCarrick.

The laity is increasingly saying: ‘Enough’

The letter to Bishop Guglielmone from Tollefsen embodies the ethos of a laity increasingly angry over the sex abuse crisis and its true nature as exposed by the McCarrick scandal – a laity also seeking answers from a Church hierarchy appearing more by the day to be often driven principally by power.

Tollefsen calls for an independent investigation of the hierarchy that “must be maximally transparent, and it must be thorough and uncompromising.”

“Those who lead it must be men and women of sound faith, whose genuine love for the Church is their guiding motivation,” he writes.

“It must do its work within a clearly stated and maintained framework of protection for all whistleblowers,” he says. “Its findings must be honestly and unambiguously promulgated to the faithful. If it is not clear to the people of the Church that the investigation meets these standards, it will fail in its purpose.”

Tollefsen’s second condition is the removal from office of any bishop found by the investigation to be negligent in the McCarrick scandal.

He explains there are two reasons for why he is directing these conditions to Guglielmone when he has no reason to suspect Guglielmone of partaking in the cover-up – lack of trust for the bishops and complacency among them.

“The bishops have looked out for their own”

“The first is that, sadly, we have arrived at a point where it is impossible for members of the laity fully to trust any bishop with whom we are not personally and intimately acquainted,” says Tollefsen. “I know that there are good bishops, and no doubt their friends can testify to their integrity and veracity. But the bishops are a brotherhood, and it is simply a fact that brothers talk, and that they look out for their own.”

“We have ample evidence that the bishops have looked out for their own,” Tollefsen tells Guglielmone, “we presume as well that they have talked, that it has been more or less an open secret among the bishops, as it was among many, many, others, that McCarrick was at least unchaste, if not sexually abusive, and a child rapist.”

Innocence cannot be presumed for bishops whom the laity does not know well not personally, he says, and he would like to give his local ordinary the benefit of the doubt, “But I cannot do so unless and until it becomes clear to me that you are advancing—firmly, constantly, vigorously, and publicly—the cause of a restoration of moral order to the ranks of the episcopate, transparency in the Church, and accountability on the part of Her leaders.”

The second reason Tollefsen says for why he implores his bishop with the specific conditions he does is that even innocent bishops will likely “do little or nothing, save perhaps repeat the anodyne messages of “concern and accountability” that are the stock and trade of the hierarchy at these times. And nothing will change.”

There must be change, Tollefsen tells Guglielmone, and the laity shares in the responsibility of bringing it about, even though lay people have limited ability to do so.

This leaves laypeople one option in dealing with the clergy sex abuse crisis, says Tollefsen, announcing he will take the amount of funds he once gave to his diocese and increase the giving to his parish and other charities by that amount until the scandal is authentically addressed.

“So we laity are doing the only thing we can do that seems to promise success in getting the bishops to demand and cooperate with an independent investigation,” he writes, concluding that he will hope and pray to see “clear and public efforts” on the bishop’s part to meet what he also hopes Guglielmone agrees is “the most pressing and immediate need of the Church they both love.”

Tollefsen invites other lay Catholics to use his letter for a template to write their own bishop. Its full text can be found HERE.