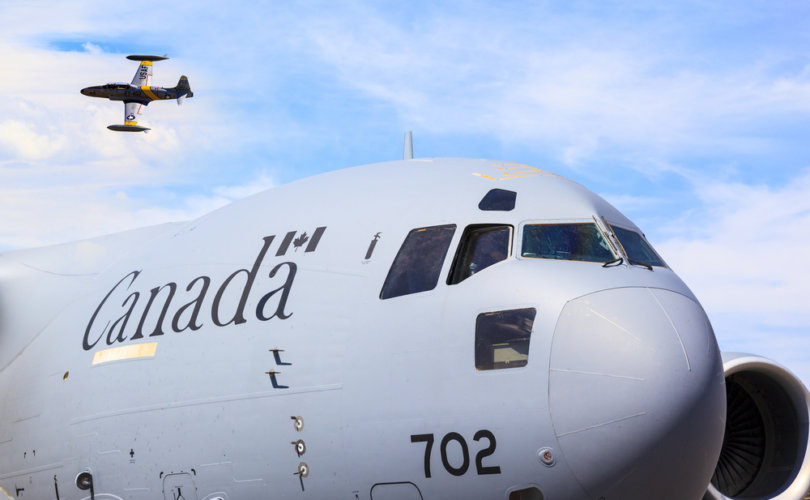 (LifeSiteNews) – The Canadian military, a once illustrious institution with an international reputation for excellence and professionalism, is on the decline as it pushes a politically correct agenda to its members.

LifeSiteNews recently received an email that was sent out on behalf of the Royal Canadian Air Force (RCAF), outlining a series of “woke” initiatives that the military is promoting among its ranks.

The email came specifically from the office of the 8 Wing Deputy Commander, which is based in Trenton, Ontario. The current Deputy Commander of the 8 Wing is LCol Audrey Lavoie. Lavoie has served in the Canadian Armed Forces (CAF) since 2002 and was deployed in Afghanistan in 2008 as well as in other non-combat scenarios around the world.

“Interested in a culture that embraces and values differences?” the message asked. “The core of the RCAF Employment and Diversity Program is to bring awareness and foster an inclusive organizational culture and remove employment barriers where under representation exists.”

Woke talking points surrounding themes centered on “diversity,” “inclusion,” gender and LGBT have been at the forefront of CAF messaging and efforts over the past few years. Numerous documents have been released in all branches and at all levels of the CAF calling for sweeping changes and reforms.

Some efforts have focused on issues of sexual harassment, which has been a legitimate issue at times in the CAF, and reforms are aimed to help fix this problem. Harassment is just one part of the reforms pushed by many in the CAF, however, as all manner of politically correct talking points are lumped together and presented as problems that need to be solved.

The issue of gender, whether it be male/female relations, or the notions of “non-binary” and other similar ideas is a constant. Currently, as part of initiatives to advocate for a larger female contingent and influence in the military, the CAF has employed a framework called Gender-Based Analysis Plus (GBA+).

According to the Canadian government, “GBA+ is an analytical process that provides a rigorous method for the assessment of systemic inequalities, as well as a means to assess how diverse groups of women, men, and gender diverse people may experience policies, programs and initiatives. The ‘plus’ in GBA+ acknowledges that GBA+ is not just about differences between biological (sexes) and socio-cultural (genders).”

The Canadian government committed to using GBA+ in 1995 to approach gender issues in response to a UN initiative about women that was held in Communist Beijing.

Some may find the GBA+ philosophy difficult to pin down, as it presents ideas that seem contradictory. For example, the government’s GBA+ explanation states: “… every human cell has a sex and every person is gendered, and sex and gender must not be neglected in your analysis.” This phraseology might seem to the readers like the GBA+ initiative recognizes the biological nature of male and female, but also suggests that people are also “gendered” despite their biological sex/gender.

In conjunction with hypothetical gender ideas, the CAF has embraced more of the LGBT agenda in recent years.

Five years ago, the Royal Canadian Navy (RCN) released a news article about the RCN “Summer of Pride.” The article from 2016 stated: “Many units in the RCN have taken part in Pride celebrations across the country to mark the contributions of lesbian, gay, bisexual, transgender, and questioning (LGBTQ) Canadians.”

As part of the pride events, rainbow flags were flown on certain military vessels: “A number of the RCN’s Naval Reserve Divisions flew the flag as well, including Her Majesty’s Canadian Ship (HMCS) Cabot in St. John’s, HMCS Prevost in London, and HMCS York in Toronto.”

In 2016, the RCN doubled down on their support for LGBT flags and causes as Commander Rob Johnson stated, “Tangible proof of the navy’s support and commitment to Pride and diversity can hardly get more powerful than that!”

Last year, while the country was locked down and pride events were canceled nationwide, the CAF managed to pull off LGBT events, both in person and virtually. What was called “Pride Season” included virtual events, ceremonial flag raisings of rainbow flags, discussion panels with members of the CAF, and even virtual flag raising events.

The commitment to the LGBT and woke agenda has run alongside a decline in recruiting numbers for the CAF. The insistence on politically correct initiatives has not helped the CAF grow or retain adequate numbers according to their own estimation.

— Article continues below Petition —
BOYCOTT United over religious and medical COVID vaccine exemptions
Show Petition Text
21686 have signed the petition.
Let's get to 22500!
Thank you for signing this petition!
Add your signature:
Show Petition Text

The failing recruitment policies of the CAF in light of the onward march of the LGBT and “inclusion” agenda has led some commentators to criticize the direction the military has taken.

She spoke directly to the push for the military to enlist an arbitrary number of “minority groups,” specifically women, writing, “Here’s the problem: in opening combat roles to women, we send out messages to both sexes that are either untrue, offensive or both. We are telling women that they are functionally equal to men, which everyone knows is false. And we’re telling men that the social goal of gender neutrality is more important than their own security, which is offensive and demoralizing.”

Despite declining enrollment and a significant disinterest in the military by most Canadians, the CAF seems poised to continue with promotion of the LGBT and woke agenda. In October of last year, the CAF tweeted: “If you’re thinking about wearing our uniform, know what it means. Love is love. Know what we mean?”