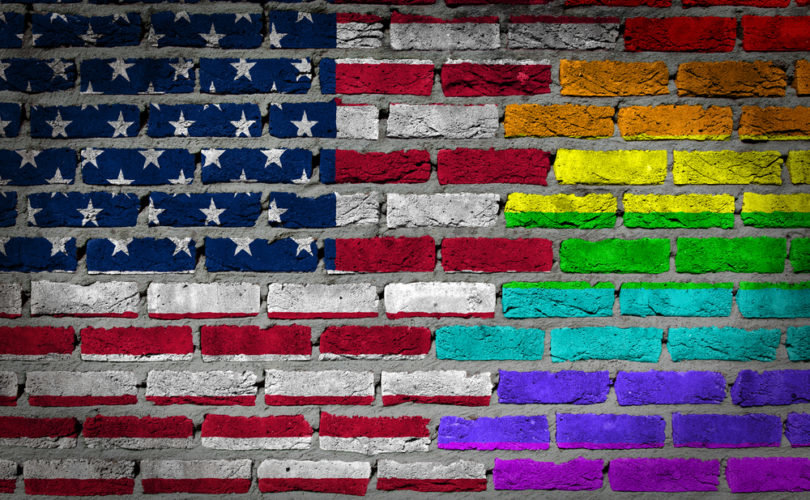 (LifeSiteNews) – As happens every year with the arrival of June’s “Pride Month,” major corporations are signaling their fealty to the LGBT cause by adopting rainbow variants of their logos all over the world … with one conspicuous exception.

Across Twitter, various users have collected examples of companies across a variety of fields rebranding their social media accounts with unmistakable “pride” color schemes for western audiences, but not for their accounts targeting customers in the Middle East.

The discrepancy reflects a persistent tension in so-called progressives’ dominant political strategy of playing to the perceived grievances of various groups based on ethnic, religious, or sexual identity, in that occasionally those groups’ dominant values can come into conflict.

— Article continues below Petition —
PETITION CONGRESS: Stop the grooming & sexualization of children in schools
Show Petition Text
6519 have signed the petition.
Let's get to 7500!
Thank you for signing this petition!
Add your signature:
Show Petition Text

In the United States, for instance, leftists regularly cast homosexuals, transgenders, and Muslims (among others) as ongoing victims of institutionalized discrimination and deep-seated cultural bigotry (despite the LGBT community enjoying so much cultural dominance that most corporations signal “pride” loyalty in the first place), yet majority-Muslim countries in the Middle East are known for subjecting homosexuals to violence and abuse virtually unheard of in present-day America.

By contrast, in the United States, the labels “homophobia” and “transphobia” are commonly deployed against individuals who merely hold religious views of sexual morality incompatible with same-sex unions or object to the notion that gender is a malleable social construct while nevertheless treating same-sex-attracted or gender-confused individuals with compassion and respect.

In one particularly egregious display of the corporate world’s selective social conscience, entertainment giant Disney has been among the most aggressive in promoting LGBT dogma through its parks, programming, and merchandise, yet maintains a relationship with the authoritarian Communist regime of China despite its treatment of its Uighur Muslim population, many of whom have been placed in camps and subjected to torture, forced abortion, and sterilization.

Disney drew widespread criticism for filming its live-action Mulan remake in China in the Xinjiang province in which Uighur Muslims are reportedly oppressed, and then thanking the “publicity department of CPC Xinjiang Uighur Autonomy Region Committee.” Critics have also slammed the corporation for scrubbing content deemed unacceptable by the Chinese government.

“Fear is the only explanation for this level of fraudulence,” wrote OutKick’s Robby Burack. “Just as social media users instinctively support the latest progressive trend through mass formation psychosis, executive marks do out of fear. Front-facing business figures remain gravely afraid of the journalists and advocates who form the outrage mobs. Sitting suits have seen too many careers of their counterparts crater amid streams of outrage that emanate on Twitter. And they fear they are next and thus will champion any social movement to prevent that.”