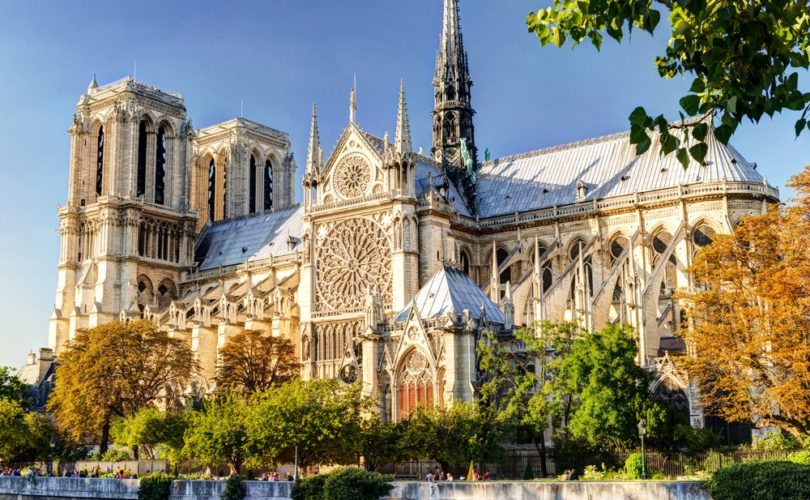 (LifeSiteNews) — Many French Catholic faithful were shocked Thursday by the news that a “woke” revamp of Notre Dame de Paris, the beloved cathedral of France’s capital, was largely approved by a special heritage commission tasked with the preservation of historic monuments.

The “Commission du Patrimoine,” which is a special agency of the French ministry of culture, met with representatives of the Archdiocese of Paris, who presented their highly controversial plan on Thursday morning. By mid-afternoon, the commission had given the official green light to a plan that involves the introduction of contemporary art, a “Laudato si’”-compatible “discovery trail and the refurbishing of the nave, complete with moveable benches and a lectern that would be placed right in front of the (new) modern altar at the crossing of the transept.

Naïvely, many imagined that the civil authorities would put their foot down when faced with a “politically correct Disneyland,” as journalist Henry Samuel of the Telegraph put it the newspaper’s shocking report two weeks ago that revealed the archdiocese’s plans to the world.

Many voices were raised over the past two weeks condemning the “silly,” “childish,” “doltish,” “kitschy” plans that would affect the very nature of the cathedral. Such was the outrage at the plan to alter the cathedral’s interior aspect, with luminous phrases projected onto the walls, the remodeling of side chapels according to contemporary “ecological” thought and musical themes to accompany tourists’ discovery of the “significance” of Christian symbols that restraint could have been hoped for. Especially when the Archdiocese of Paris is mired in a crisis because of the sudden resignation of Archbishop Michel Aupetit, who has been (rightly or wrongly) accused of having had a consensual affair with a woman when he was vicar general.

The hundred or so signatories of an appeal that was simultaneously published by “La Tribune de l’Art” and by the national daily Le Figaro on Tuesday were not listened to. They included many academics, architects, philosophers, historians and art historians, museum curators, journalists and television personalities. While the latter – Stéphane Bern, for instance, who specializes in the preservation of French architectural heirlooms, and Valérie Expert, a consumer affairs specialist – are very well known by the public at large as national TV anchors, other signatories may have seemed more obscure.

But their prestige is enormous. Hailing from the Sorbonne in Paris, the Louvre, the British Library, the domain of Versailles, the Villa Médicis in Rome and top-class colleges such as the Ecole Normale Supérieure in Paris, as well as many other universities and cultural establishments, they are all authorities in their own domain. Several members of the “Académie française,” founded in the 17th century by Cardinal de Richelieu, such as philosopher Alain Finkielkraut, historian Pierre Nora and novelist Jean-Marie Rouart, all signed the appeal. Ibn Warraq, an anti-islamist American author, closed the list.

Their op-ed claimed, “A new threat hangs over Notre-Dame de Paris: what the fire spared, the diocese wants to destroy.”

Having criticized the plan masterminded by Father Gilles Drouin, a modernist professor of  liturgy, recalled that one billion euro’s worth of gifts were generously contributed by people the world over for the reconstruction of Notre-Dame, the group issued a plea for a true renovation of the cathedral in its former splendor, as imagined and wrought by the 19th century genius who restored it in full harmony with its original Gothic inspiration, Eugène Viollet-le-Duc:

Yet this tragic fire provided us with an exceptional opportunity, an absolutely unique opportunity: the restoration of Viollet-le-Duc’s decor. We are indeed in a position to bring back to life a coherent set of decor of great formal perfection. The brilliant architect, intent on prolonging and completing the work of the builders of the Middle Ages, had conceived a total work of art, bringing together architecture and decoration, painting and sculpture, cabinetmaking and goldsmithing, stained glass and lighting. Guided by a very precise vision of an artistic and spiritual ideal, he elaborated and implemented the cathedral of cathedrals.

Let us respect the work of Viollet-le-Duc, let us respect the work of the artists and craftsmen who worked to give us this jewel, let us simply respect the heritage principles proper to a historic monument. This restoration work must allow us to recover the authenticity of the place and its experience, by replacing the right works in their right places, in an overall harmony and coherence.

Their call was ignored by the government commission. It merely decided that all statues present in the side chapels must remain there instead of being moved elsewhere in the cathedral, and it barred the idea of using the choir behind the contemporary altar proper to the Novus Ordo as a “space for prayer,” observing that its 18th-century pavement is too frail to bear the footsteps of thousands of tourists. This was where the Mass was formerly celebrated in a space where only the “actors” of the Eucharist – clergy, altar-boys, sacristans … – would move about.

The commission also insisted on seeing a prototype of the new benches on wheels that are to replace the existing chairs in the nave, complete with lights meant to “illuminate” the assembly as one of the “main” elements of the liturgy. The archdiocese is expected to comply within a few months, also giving details on how these benches will regularly be removed from the nave, seemingly to be stocked in the Cathedral’s crypt …

This neon-type lighting of the benches was one of the ideas put forward by Bishop Aupetit, to the public’s total disbelief.

The lighting scheme a whole, which is intended to be “at eye level” (and that will seemingly replace the traditional chandeliers that illuminate the nave from above) was also approved by the commission. Once again, the objective is to give more visual and symbolic importance to the assembly during liturgical office.

The commission also OK’d the placement of a baptismal font at the entry of the nave, a lectern in front of the altar (as mentioned higher up) and the construction of a new altar and tabernacle. It made clear that all of these liturgical objects must be created by one author. If new altars and lecterns in other historic churches are to be gone by, such as the Pantheon in Rome, the result could very well be disastrous.

In the side chapels, the “discovery trail” refurbishing that will include the removal of the confessionals was also approved by the commission. It agreed to the installation of “contemporary art” that will “dialogue” with the historic paintings and statues. The names of several contemporary artists are already being quoted: Ernest Pignon-Ernest, Anselm Kiefer and Louise Bourgeois (Yves Daoudal, a Catholic journalist in Brittany, gives examples of their work here).

The Paris region public television station France 3 published a short video showing some of the novel elements that will be introduced into Notre Dame – if, that is, public protests do not manage to discourage the archdiocese’s misguided plans – and including an interview with Didier Rykner, art historian and editor-in-chief of “La Tribune de l’Art.”

He said he opposed the plans among other reasons because “all these transformations are being made in the name of a liturgy that is in fact an invented liturgy, a mix between Vatican II and the 1960s and 70s and what has just been invented by the diocese of Paris.” “You don’t make experiments in Notre Dame,” he stressed.

Pierre-André Hélène, another art historian specializing in Parisian monuments, insisted that the first and foremost mission of Notre Dame is to welcome Christian faithful: “It is a church before being anything else, a Cathedral; only secondly has it become a historic monument. Viollet-le-Duc would certainly not have approved this vision of the diocese that seems to be heading for a kind of ‘Christ-Land’ aimed at tourists.”