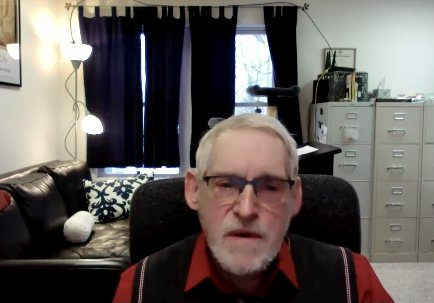 BIG RAPIDS, Michigan (LifeSiteNews) — What should have been an ordinary beginning-of-the-semester introduction video for a class at a Michigan university went viral after the professor appeared on screen in a full helmet and medical mask before launching into a vulgar rant in which he called students “vectors of disease.”

“Listen up, folks, I’m old enough to be your grandpa and you people are vectors of disease to me,” Professor Barry Mehler, 74, told students after pulling off his NASA-like $300 helmet and N95 mask in a video posted January 9.

“So, when I look out at a classroom filled with 50 students, I see 50 selfish kids who don’t give a s*** whether grandpa lives or dies,” added Mehler, who is a history professor at Ferris State University in Michigan and founder and director of the school’s Institute for the Study of Academic Racism.

“There is no benefit whatsoever to coming to class,” Mehler continued in the 14-minute video,  which has racked up over a quarter of a million views since Sunday — explaining that his class can be fully conducted online.

While Ferris State University does not require students to be vaccinated against COVID-19 to attend in-person classes, it does mandate that students wear face masks indoors regardless of vaccination status.

The university’s policy does not appear to be strict enough for Mehler, who told students during his video diatribe that if they decide to come to class after all, he will not be taking their questions since he will be “wearing this f***ing helmet in order to stay alive.”

“I work in a paid f***ing union job and no [expletive] of an administrator is going to tell me how to teach my classes, because I’m a f***ing tenured professor,” Mehler also ranted. “So if you want to go to complain to your dean, f*** you, go ahead, I’m retiring at the end of this year and I couldn’t give a flying f*** any longer.”

Though at the beginning of the clip Mehler spoke with apparent concern about the heightened rates of human suffering in the world, he later told his students, “You people are just vectors of disease to me and I don’t want to be anywhere near you. So keep your f***ing distance.”

In a statement to local news outlet Capitol Confidential, Ferris State University president David Eisler said he “was shocked and appalled by this video.”

“It is profane, offensive and disturbing and in no way reflects our university or its values,” Eisler said.

As the bizarre rant gains national attention, Mehler has been placed on administrative leave and is under investigation by the university.