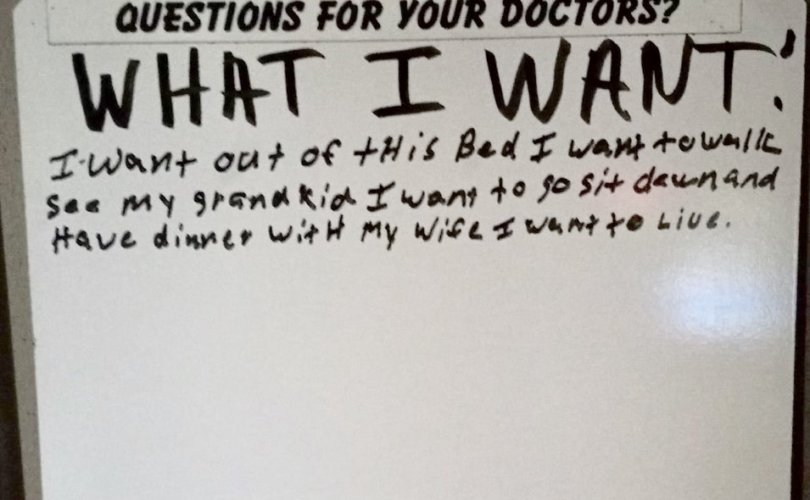 A message reportedly by a man being held at an Ohio hospital reads, 'WHAT I WANT: I want out of this bed. I want to walk, see my grandkid. I want to go sit down and have dinner with my wife. I want to live.'Micah Moreland

Update: This story was updated November 15, 2021, after LifeSiteNews learned of the death of Isaac Martin.

MARIETTA, Ohio (LifeSiteNews) – A man has died after his wife alleged that an Ohio hospital was holding him against his will.

Isaac Martin, 51, went to Marietta Memorial Hospital in Ohio one month ago to get treated for pneumonia. According to his wife and power of attorney, Cindy Carpenter, Isaac was immediately put on a ventilator, given excess amounts of sedating drugs, coerced into signing a piece of paper declaring he wants to stop medical treatment, and has since been refused to be allowed to go home or be transferred to another facility.

Micah Moreland, Isaac’s patient advocate, who has been working with the family to help advocate for Isaac’s rights, says the actions of the hospital constitute “false imprisonment” and “medical battery.” Medical battery is defined as “the intentional violation of a patient’s right to direct their own medical treatments.”

“[While he was under the influence of sedating drugs] they were coercing him to have palliative care, he had agreed to that but he wasn’t really ‘with it’,” Moreland told LifeSiteNews.

“[Afterwards he told the doctors] he just wanted to go home with hospice, and they said he was ‘under the influence’ and couldn’t make that decision,” added Moreland. “And with the medical POA (power of attorney) right there in the room, which is his wife, they denied it.”

Moreland informed LifeSiteNews that he contacted the local police and the other local authorities requesting an immediate investigation into the situation, but all requests for aid have presently been denied.

In a video provided to LifeSiteNews, Isaac Martin, who both Moreland and Cindy say was already severely underweight and is now skeletal, can be seen in his hospital bed. In the footage, Cindy can be heard asking her husband if he would like “to go home” to “have them start feeding him again” and to stop giving him “morphine.” Although the footage is grainy, it seems to show the sick looking man nodding to indicate “yes.”

UPDATE: Ohio man dies after his wife accuses hospital of holding him against his will, removing his feeding tube

Cindy, who was her husband’s medical power of attorney, explained to LifeSiteNews that her husband had squamous cell carcinoma, a potentially life-threatening form of cancer, but he was not “dying” when he was brought into the hospital.

Cindy told LifeSiteNews that on Friday November 5, over two weeks after being admitted, the hospital gave into their request and said instead of staying at the hospital, he could be transferred to a facility in Columbus for “long-term care.”

Cindy says her husband agreed to that plan, and she left him at the hospital Friday afternoon to go to their home in West Virginia to “pack for Columbus.”

In her statement to LifeSiteNews, Cindy said that her husband “texts me and messages me every night” but “this night was different.”

“On that night, I called [the hospital] and I asked ‘Is my husband okay?’,” at which point she says the person on the phone told her that he was doing well, and just “resting peacefully.”

“Not one time did anyone tell me, while I’m packing to go to Columbus, that they had him sign a paper at 4:30pm saying that he wanted to do what they wanted him to do [which was have him opt for palliative care],” she stated.

Cindy says that after finally being informed over the phone by a doctor that her husband requested to be removed from his feeding tube, and be administered a “morphine drip”, she rushed to the hospital. Upon arrival, she told LifeSiteNews that she was “screamed” at for objecting her husband’s treatment, and was ultimately escorted out of the hospital and notified she was no longer welcome on the premises.

In a picture taken by Cindy provided to LifeSiteNews (shown at the top of this article), a whiteboard can be seen with the writing, “WHAT I WANT: I want out of this bed. I want to walk, see my grandkid. I want to go sit down and have dinner with my wife. I want to live.”