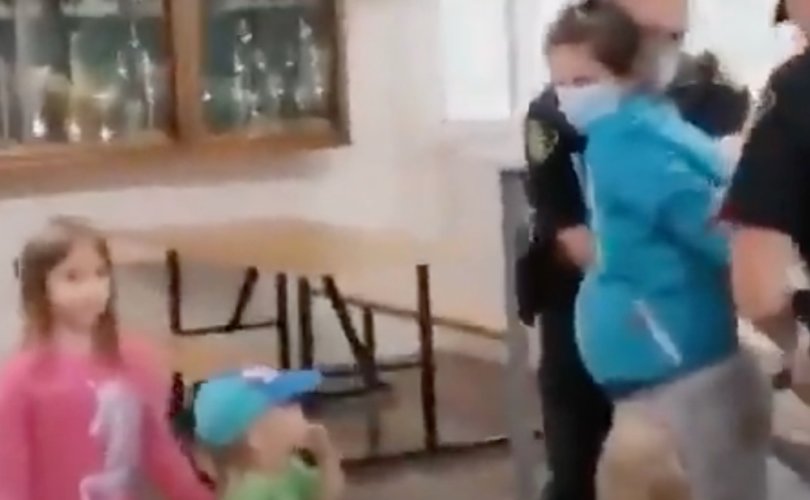 RIPLEY-HURON, Ontario (LifeSiteNews) – Ontario Provincial Police arrested a young mother in front of her crying children for ‘trespassing’ after she allegedly did not produce a proof-of-vaccination.

As seen in a viral video posted to Facebook on September 30, a young mother named Sara was arrested in front of four small children by two male police officers for “trespassing” at Ripley Huron Community Centre in Bruce County, Ontario. Sara allegedly had not shown proof-of-vaccination against COVID-19 upon entering the public facility.

“Why are you asking her to leave?” asked Josh Dawson, the man who recorded the incident.

“This is between her and us,” replied one of the two Ontario Provincial Police (OPP) officers.

“Why are you asking her to leave?” repeated Dawson, at which point a woman can be heard sternly saying “Answer!” to the officer.

In response, the police officer tells Sara that the facility manager “has asked you to leave,” and that if she does not provide “identification” she will be arrested for “trespass to property.”

“We’re not trespassing; we’re taking part in a facility that everyone else is taking part in,” replied Dawson as the officer shoved his hand in front of the camera, obstructing the recording.

“You don’t want to do this in front of your children,” the officer told the mother seconds before he grabbed her arm and pulled it behind her back. One of Sara’s children looked up at the arrest taking place and started crying.

As the two officers handcuffed Sara, Dawson continued to ask why she was being apprehended.

One officer replied that she was being arrested under the “Trespass to Property Act.”

Dawson then told the officer, “If you’re participating in a public activity, it is not trespassing.”  He was referring to the fact that the facility is open to the public, and they were there to use the skating rink.

The two male officers proceeded to escort the woman out of the arena and into a police SUV, as Dawson and a few other patrons followed and crowded around the vehicle, telling the officers that they are apprehending the young mother unlawfully.

One person can be heard saying, “This is Canada; this is not Nazi Germany.”

“It is now,” someone replied.

“A mandate is not a law!” Dawson exclaimed repeatedly during the arrest.

After Sara was placed in the vehicle and the door was closed, Dawson returned to the arena. At that point in the recording, one of the small children can be heard crying and calling for his mother.

Addressing both the officers and the onlookers, Dawson ended his recording by stating they were being arrested for “participating in skating.”

As stated by Dawson’s Facebook post, which has garnered almost 2,000 shares, “[The video below shows] OPP officers at Ripley Arena arresting Sara for not providing her vaccination status,”

“Our streets are safer!” the post reads sarcastically and alleges that “[T]hey were okay with me not providing mine.”

According to Rebel News, Dawson described in a later social media post how the situation played out after his recording stopped and gave an update on Sara’s condition.

“The Kincardine OPP detachment drove Sara in cuffs to the Ripley Public School, issued her a $65 ticket alleging trespassing, drove her back to the Ripley Arena, and told her she’s banned from the arena.”

Since the incident, the arena has been flooded with a series of negative internet reviews, warning people of the facility’s conduct.

“Disgusting place that calls cops on a non-violent mother while she’s with her children. Shame on this community centre,” read one review posted shortly after the incident.

“They should change their name to Ripley Huron Communist Centre,” added another reviewer.

Currently, people in the province of Ontario are “required” to show papers proving they have been vaccinated against COVID-19 to enter a variety of “non-essential” businesses and facilities.

Examples of a “non-essential” service that requires proof-of-vaccination to enter are gyms or fitness centers. Liquor stores and other retail businesses are considered “essential” and are currently exempt from the mandate.

Constitutional Rights lawyer Rocco Galati, who has filed a lawsuit on behalf of a collection of Canadians against various levels of government over what he calls “dictatorial” and “illegal” COVID-19 measures, previously referred to the proof-of-vaccination system as a “vicious tool to enforce vaccinations.”

“This is not a medical or health agenda; this is a political one. They want everybody vaccinated for whatever reason. Up until now, there has never been a problem with people exercising their choice,” stated Galati.

Claiming there are “no scientific basis to the [so-called COVID] measures,” Galati told the public in a press conference on August 26 that he “can prove that in a court of law.”