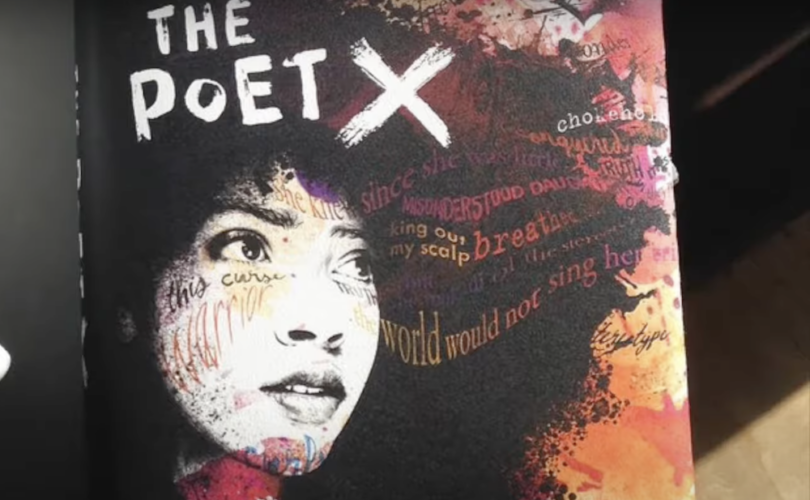 OVERLAND PARK, Kansas (LifeSiteNews) – A young woman in Kansas is challenging her former high school for presenting a sexually explicit book to her brother without parental knowledge or consent.

Upon learning about a class assignment given to her 14-year-old brother at Blue Valley Southwest High School in Overland Park, Kansas, Izabella Borowiak-Miller began speaking out against overly sexualized and explicit content being given to students without first informing families about material which may be inappropriate or offensive.

“I am dismayed that I would have to write a letter about such an anti-family, anti-religious, and sexually explicit book,” she wrote to the Blue Valley Board of Education on January 9. “I am disgusted that my brother was subjected to this when all he and his peers did was trust Blue Valley with their education.”

The book also contains LGBT content, including the protagonist’s brother’s relationship with another male.

“At best, this is a baseless promotion of a zero-sum fallacy,” the letter continues. “At worst, this is an intentional indoctrination of children against religion. Either way, it’s hard to see how there is any educational value this book may have that is worth lying to the students on top of exposing them to sexual content.”

Borowiak-Miller also spoke at a board meeting, sharing as much from her letter as her allotted three minutes allowed.

In both the letter and her words to the Board of Education, Borowiak-Miller shared some quotes from the book, written in first-person from the perspective of a 15-year-old girl who mocks her family’s Catholic faith and details her sexual experiences.

The book describes the protagonist sacrilegiously spitting the Eucharist out of her mouth after receiving Holy Communion and “hid[ing] the wafer beneath the bench where his holy body will now feed the mice.”

“When I was in high school … I had to bring a permission slip in to watch the movies we’re going to watch in class, like the Leonardo DiCaprio version of Romeo and Juliet,” Borowiak-Miller told LifeSiteNews in a phone interview on Wednesday. “Why wasn’t there [a] permission slip or why was it so intentional that nobody knew about the contents of the book?”

She explained that when her brother told her of a “book that spoke poorly of Our Lady” that he was reading in class, she began reading the story and was “just appalled” that it had been assigned to students without a warning of explicit content.

According to Borowiak-Miller, her mother had emailed the boy’s teacher prior to the introduction of The Poet X informing him that “we don’t want them to be exposed” to sexually explicit content. However, the boy’s mother did not receive a response to her email, and the explicit book was assigned, which included reading the novel out loud in class and listening to the audio book.

Although this is the first incident regarding sexually explicit content that their family has faced, Borowiak-Miller told LifeSiteNews that after speaking at the board meeting, a mother “stopped me to tell me that she spoke at a meeting several months prior about a comic book that’s in the library that is very sexually explicit” and included an older man teaching sexual behavior to a young boy. The woman said that she never received any response about her concerns.

Now that she has voiced her concerns to the Board of Education in both a letter and public comment, Borowiak-Miller said that she is determining “what the next steps are to get the book either voted on or bring it to more attention.”

She told LifeSiteNews that she is “trying to connect with other people” to find support in her fight to challenge the school’s lack of transparency, including joining a local PTA (parent-teacher association) parents Facebook group and reaching out to conservative organizations such as Moms for Liberty and Kansas Family Voice. Borowiak-Miller said that while she “disagree[s] with the book and I think it shouldn’t be in schools at all,” her intent with challenging the curriculum is to advocate for greater transparency and the option to avoid this material in the classroom.

Two parents in Nevada are suing a school district and school officials for forcing their daughter to complete a sexually explicit assignment for a grade.