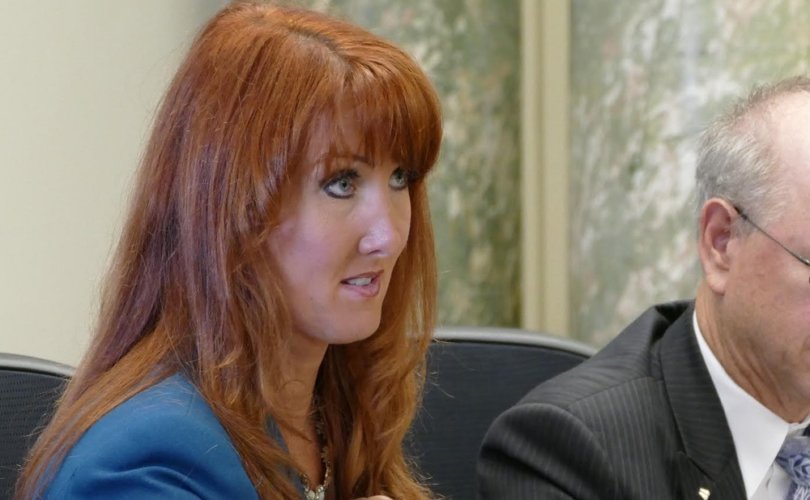 DES MOINES, Iowa, August 21, 2018 (LifeSiteNews) – Pro-life group Save the 1 argued against abortion exceptions in Iowa’s heartbeat law in court last Friday, seeking to intervene in the pending challenge to the law.

The heartbeat law, which bans abortions if the unborn child’s heartbeat can be detected – usually around six weeks – is considered one of the strongest pro-life statutes in the U.S. and is on hold with a legal challenge from pro-abortion groups.

Republican Governor Kim Reynolds signed the heartbeat bill into law May 4, and later vowed to defend it amid criticism from abortion activists. It was due to take effect July 1.

The case is being watched in other states for precedence.

Judge Huppert heard arguments Friday on whether to allow Michigan-based Save the 1 to intervene in the suit.

The pro-life group is suing to challenge the law’s rape, incest and fetal anomaly exceptions.

“We challenge the exceptions within the heartbeat law as being unconstitutional, not because they are too limited, but because they target our very lives,” Save the 1 founder and attorney Rebecca Kiessling told the court.

The rape, incest and fetal abnormality exceptions are based upon the fabrication that aborting children conceived in these circumstances is medically necessary, she said.

Kiessling also argued that if language in the law had specified exceptions in cases of biracial rape, or cases of African American babies or Jewish babies, the discrimination would be so clear, and there would be a national outcry.

Save the 1 advocates for women who become pregnant by rape or incest and for their children conceived in these circumstances. They also advocate for women given an adverse pre-natal diagnosis.

Kiessling, who was conceived in rape, testified that her mother would have aborted her if abortion had been legal at the time, and yet her mother loves her today.

“Today, I am just as worthy of life and love and protection as anybody else,” Kiessling said. “And the fact that my mother did not choose to have me doesn’t make me any less lovable or any less worthy of dignity and equal protection.”

Rape victim mothers and their children deserve to have their day in court, she said, and it is a myth that a rape victim is better off after an abortion.

“That is not true,” said Kiessling. “It’s personally offensive to read in the brief that it’s humanitarian to be able to kill children like me.”

Lawyers for the pro-abortion petitioners said Save the 1 had not demonstrated that it had standing, and allowing the pro-life group’s intervention would result in unnecessary delay in the case.

They want the heartbeat law struck down on the premise it would violate Iowa women’s rights to due process, their rights to liberty, safety and happiness, and their rights to equal protection under the Iowa constitution.

Alice Clapman with Planned Parenthood Federation of America cited the recent Iowa Supreme Court ruling striking down the state’s 72-hour waiting period for an abortion to say that for many rape and incest survivors abortion “is an important step in the recovery process, and in some cases of domestic abuse access to abortion is actually a matter of physical safety.”

“The Iowa Supreme Court found factually, based on the trial record,” she said, “that women’s ability to access to abortion is critical to their health, equality, personal autonomy, bodily integrity and financial stability.”

Lawyers for the state said allowing Save the 1 to join the lawsuit would create a conflict of interest and may also cause a delay.

Save the 1 is a previous client of Thomas More Society, the pro-life legal non-profit representing the state.

Thomas More Society took on the case for the state after Iowa Attorney General Tom Miller – a committed abortion proponent – disqualified himself from representing the state, due to his “core belief” it would undermine women’s rights.

Thomas More had assisted Save the 1 in establishing its non-profit status, and Kiessling said the pro-life group had completed a conflict of interest waiver.

Iowa Solicitor General Jeffrey Thompson told the court the state was uncomfortable having an outside counsel defend a statute against a challenge brought by a former client.

Kiessling said if her group’s motion to intervene was denied, it would challenge the exceptions in federal court.

Iowa’s Coalition of Pro-Life Leaders provided LifeSiteNews with a statement on Save the 1’s motion to intervene on the pro-abort challenge to the heartbeat law.

“We appreciate the sentiments of the Save the 1 organization, and we too seek a day when all unborn children are protected, regardless of their health or how they are conceived,” the Coalition statement said.

The group expressed support for the Thomas More Society efforts to defend the heartbeat law, and committed to “continue to work until all life in the womb is treasured and protected.”

“We believe the passage of the Heartbeat Law is elevating the public discussion to a place from which there is no going back, and hastens the day when all unborn children are protected,” the statement continued. “For we know the child in her mother’s womb, regardless of physical disability or how she was conceived – she’s a baby.”

This is the first such challenge to legislation from Save the 1, Kiessling said, adding that it was long overdue.

“I feel like I was born for this,” she told LifeSiteNews. “I feel like my life was spared for a purpose and the most selfish thing I could probably do would be to just live my life and say, ‘too bad for the rest.’

Huppert gave the parties in the case until August 24 to file any additional briefs on the motion, and said he would issue a decision after reviewing the filings.