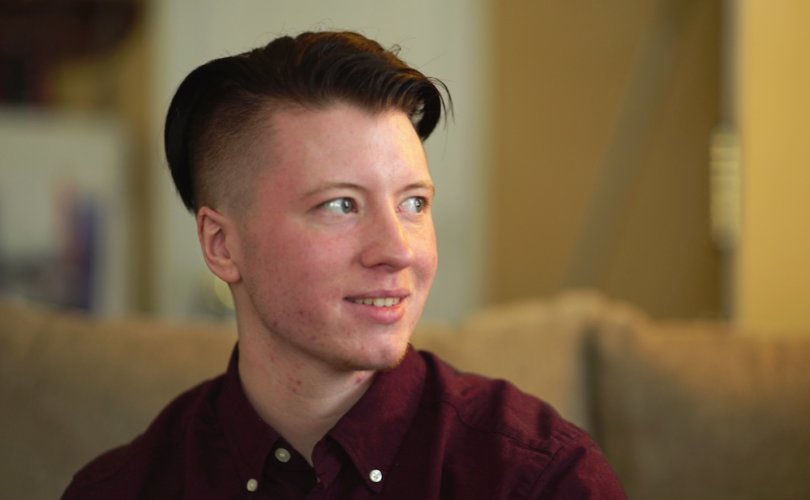 Rebeccah Feldhaus, 25, who went by “Rowan"

AUGUSTA, Georgia, May 18, 2017 (LifeSiteNews) – A woman in the last phase of “gender assignment” died Tuesday of complications from surgery, one of the last procedures in her effort to “transition” to the male sex.

Rebeccah Feldhaus, 25, who went by “Rowan,” had a hysterectomy and was readmitted to the hospital later after going into septic shock and losing oxygen to her brain.

“Rowan knew the risks going in to all of this and he was willing to accept the risks to do what he knew he wanted to do,” friend Austin Akins said.

Feldhaus was an Augusta University student and board member for the LGBT advocacy group Georgia Equality.

She had begun the “transition” process around two years ago, according to WRDW-TV, and petitioned the court last year to legally change her name from Rebeccah Elizabeth to Rowan Elijah.

“My policy has been that I will not change a name from an obvious female name to an obvious male name and vice versa,” Judge David Roper had said.

He had denied the same request from another local transgender woman wanting to change her name as well.

After both women appealed, a state court of appeals overruled Roper and granted the women’s petitions.

“We were all very proud of Rowan for not accepting what was clearly a wrong and to fight for his own personal freedoms,” Atkins said.

Feldhaus was part of an Atlanta Journal Constitution (AJC) video segment on “transgender” Georgia students during the time when the state and others were contending with former President Barack Obama’s controversial edict to the nation’s schools.

Georgia was one of several states that sued the federal government in May 2016 over the directive requiring public schools and universities to allow transgender students to use the restrooms, showers, and overnight accommodations of the opposite biological sex.

“It frustrates me they lack empathy about how we just want to live our lives,” she said in the AJC segment. “We’re the ones who feel unsafe.”

Numerous experts and others have warned of the negative effects, psychological and otherwise, of gender reassignment procedures, and say that individuals suffering from gender dysphoria need authentic psychological help.

Other experts and individuals who themselves have attempted gender reassignment have attested to this as well, saying surgery can in fact exacerbate the condition.

A farewell event for Feldhaus has been organized for the evening of May 22 on the Augusta University Summerville Campus.