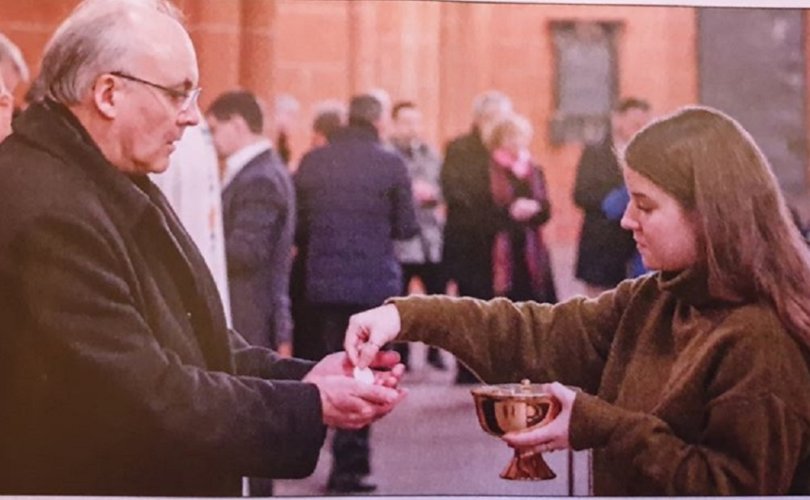 'Symbols at the opening Mass: The bishops sit with the other delegates in the nave of the church, Bishop Rudolf Voderholzer receives Holy Communion from a young female Eucharistic minister.'Konradsblatt

FRANKFURT, Germany, February 11, 2020 (LifeSiteNews) — The opening Mass prior to the first assembly of the synodal path in Germany last January emphasized an alleged equality of bishops, priests, and deacons on the one hand and laypeople on the other. With the exceptions of three bishops concelebrating the Mass, all clergy were sitting in the pews, indistinguishable from any laypeople.

At one point, lay extraordinary ministers were photographed giving Holy Communion to bishops and priests who were not wearing liturgical garments.

Cardinal Rainer Maria Woelki had already voiced his criticism of the opening Mass in an interview. Pointing to the fact that bishops and laypeople had walked in together in procession, he said this indicates “that everybody here is equal.” This has “actually nothing to do with what the Catholic Church is and holds,” the archbishop of Cologne said.

The opening Mass for the meeting of the members of the synodal path in Frankfurt last month was celebrated by Cardinal Reinhard Marx, head of the German bishops’ conference. With the exception of a deacon as well as two concelebrating bishops, all members of the clergy were sitting in the pews, wearing their coats instead of liturgical garments.

The Second Vatican Council went to great lengths to emphasize the dignity of the laity. “The chosen People of God is one: ‘one Lord, one faith, one baptism;’ sharing a common dignity as members from their regeneration in Christ, having the same filial grace and the same vocation to perfection; possessing in common one salvation, one hope and one undivided charity,” stated the Dogmatic Constitution on the Church, Lumen Gentium.

Still, the Second Vatican Council “teaches that bishops by divine institution have succeeded to the place of the apostles, as shepherds of the Church, and he who hears them, hears Christ, and he who rejects them, rejects Christ and Him who sent Christ.”

At the same opening Mass, norms of canon law may have been violated. Even though more than 100 bishops, priests, and deacons were present, a number of extraordinary ministers of Holy Communion were used in the liturgy.

According to the Code of Canon Law (CIC) published in 1983, the ordinary ministers of Holy communion in the Novus Ordo Mass are bishops, priests, and deacons. As canon 910 explains, extraordinary ministers are those officially instituted as acolytes “or another member of the Christian faithful.”

However, as the CIC points out, laypeople may not simply distribute Holy Communion under any and all circumstances. Instead, canon 230 clarifies, “When the need of the Church warrants it and ministers are lacking, lay persons, even if they are not lectors or acolytes, can also supply certain of their duties, namely, to exercise the ministry of the word, to preside over liturgical prayers, to confer baptism, and to distribute Holy Communion, according to the prescripts of the law.”

The German bishops’ conference first allowed laypeople to distribute Holy Communion during Mass in 1968. At that point, it was limited to men and considered an “experiment” for three years. Laypeople giving Holy Communion to the faithful soon became the norm.

In 2004, then-prefect of the Congregation for Divine Worship and the Discipline of the Sacraments Cardinal Francis Arinze from Nigeria published a lengthy instruction on “certain matters to be observed or to be avoided regarding the Most Holy Eucharist.”

Approved by Pope John Paul II, the document explains, “Only when there is a necessity may extraordinary ministers assist the Priest celebrant in accordance with the norm of law.”

In another section of the instruction Redemptionis Sacramentum, Arinze reiterates how extraordinary ministers of Holy Communion may only be used in case of necessity.

In addition to the ordinary ministers there is the formally instituted acolyte, who by virtue of his institution is an extraordinary minister of Holy Communion even outside the celebration of Mass. If, moreover, reasons of real necessity prompt it, another lay member of Christ’s faithful may also be delegated by the diocesan Bishop, in accordance with the norm of law, for one occasion or for a specified time, and an appropriate formula of blessing may be used for the occasion.

The instruction continues, “If there is usually present a sufficient number of sacred ministers for the distribution of Holy Communion, extraordinary ministers of Holy Communion may not be appointed. Indeed, in such circumstances, those who may have already been appointed to this ministry should not exercise it. The practice of those Priests is reprobated who, even though present at the celebration, abstain from distributing Communion and hand this function over to laypersons.”

Arinze affirms, “Indeed, the extraordinary minister of Holy Communion may administer Communion only when the Priest and Deacon are lacking, when the Priest is prevented by weakness or advanced age or some other genuine reason, or when the number of faithful coming to Communion is so great that the very celebration of Mass would be unduly prolonged.”

LifeSiteNews asked Father Gero P. Weishaupt, professor for canon law in Austria and the Netherlands, how to understand terms like “need” and “necessity” when talking about extraordinary ministers of Holy Communion.

Weishaupt, who also serves as a judge on ecclesiastical tribunals in Germany and the Netherlands, pointed out that those are relative terms, depending on the individual case and the discernment of the celebrant. “For a young and healthy priest, 100 communicants is not much, but for a frail and possibly sick priest, it is,” he explained.

The canon lawyer also drew attention to the fact that canon law seems to be applied selectively in Germany. When it comes to somebody leaving the Church as an organization according to German law in order to avoid paying the Church tax, the German bishops “immediately insist on excommunication.”

At the same time, “[h]eresies and the denial of truths of faith that are closely related to revelation, such as the non-admission of women to the priesthood, remain without punitive consequences.”

The use of extraordinary ministers of Holy Communion might be a rampant problem in Germany because of deliberate misinformation on the part of the dioceses. In a brochure on the service of those extraordinary ministers published in 2015, the Archdiocese of Vienna never mentions the limitations put on them by the Code of Canon Law and the instruction Redemptionis Sacramentum.