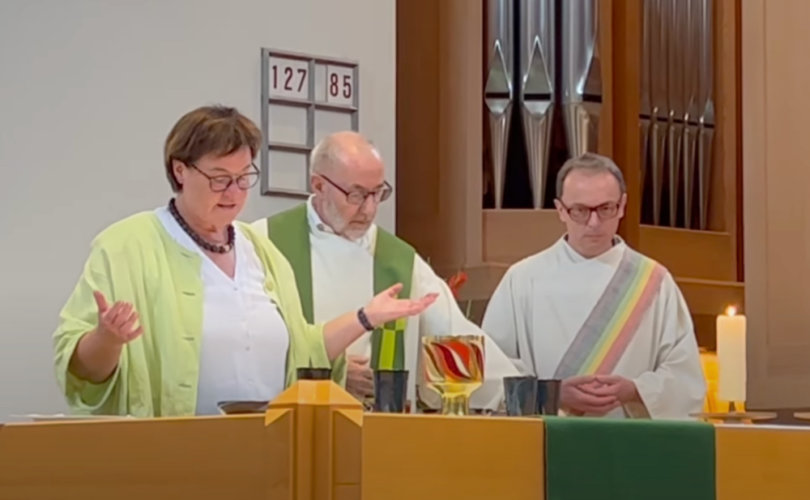 EFFRETIKON, Switzerland (LifeSiteNews) — A woman recently said a modified prayer of consecration and attempted to “concelebrate” a Mass in Switzerland, in direct violation of Canon Law. The diocese where the event took place is led by a bishop supportive of same-sex “marriage.”

In the parish of St. Martin in Illnau-Effretikon, Switzerland, a number of women recently joined the clergy on the altar, with one woman – reportedly parish leader Monika Schmid – saying the Eucharist prayer.

Schmid, according to Kath.ch, said a modified version of the words of consecration at her farewell Mass, which was to mark her leaving the parish. Schmid was joined by another woman, along with two priests – only wearing stoles over their albs, in blatant violation of liturgical law – and a deacon who was wearing a rainbow colored stole. Schmid was also barefoot.

She later proceeded to distribute Holy Communion to those attending.

Commenting on the scenes, Liturgical scholar Hans-Jürgen Feulner said it was a “grave abuse.” He noted that the prayer of consecration had been changed, as had the “whole of the Eucharistic Prayer used here.”

Canon 907 of the Church’s Canon Law expressly forbids anyone but the priest to utter the words of Consecration. “In the eucharistic celebration deacons and lay persons are not permitted to offer prayers, especially the eucharistic prayer, or to perform actions which are proper to the celebrating priest.”

Feulner also noted that the faithful have the “enforceable right” that the ministers in charge of liturgical celebrations adhere to the liturgical directives of the Church.

Such scenes are not new, however. As LifeSite has previously reported, another Swiss diocese, the Diocese of Basel, regularly sees women simulating Catholic Masses. As Dr. Peter Kwasniewski, Thomistic theologian and liturgist, explained that “the faithful rightly expect, and the Church rightly demands, that the public worship offered in a Catholic church should correspond to what is given in the liturgical books, and should not cause confusion or scandal.”

— Article continues below Petition —
PETITION: We won't give any money to liberal bishops who attack the Faith
Show Petition Text
11503 have signed the petition.
Let's get to 12500!
Thank you for signing this petition!
Add your signature:
Show Petition Text

Kwasniewski referred to Redemptionis Sacramentum, a Vatican instruction approved by Pope John Paul II in 2004, which points out that anyone making up liturgies “injures the substantial unity of the Roman Rite, which ought to be vigorously preserved, and becomes responsible for actions that are in no way consistent with the hunger and thirst for the living God that is experienced by the people today.”

Arbitrary actions, the document states, “are not conducive to true renewal, but are detrimental to the right of Christ’s faithful to a liturgical celebration that is an expression of the Church’s life in accordance with her tradition and discipline.”

Following Schmid’s actions, Fuelner called on the local Bishop of Chur, Joseph Bonnemain, to act. “Silence or ignoring on the part of the diocese is no longer possible. In my opinion, the local bishop, as pastor of his diocese, must intervene here, also from a liturgical point of view,” he said.

Noting how the event was “carried out in public,” Feulner said that “Canon law stipulates that the unlawful exercise of a priestly task, in this case unlawful participation in the Eucharistic prayer, is to be punished with a just punishment. [Bonnemain] must take action against all those involved in this serious abuse.”

Liturgical scholar Matthew Hazell noted that under Canons 1378 and 1379, Schmid, the accompanying woman, and the deacon, had all incurred severe penalties.

Bishop Bonnemain, however, has already been noted for his heterodoxy. Appointed bishop of the diocese last year, he distributed Holy Communion to non-Catholics during his Episcopal consecration Mass.

Indeed, as LifeSite already reported, Bonnemain had been appointed against the will of the local ecclesiastical authorities, which, according to local rules, have a say in the appointment of a new bishop. After they had rejected Bonnemain, Pope Francis himself was free to choose a new bishop, and he picked Bonnemain.

Bonnemain then came out in support of same-sex civil unions, claiming that he has no objections to same-sex unions and “marriages,” but asking that the marriage between man and woman then will be renamed in order to “differentiate.”

“Yes, I have nothing against our country giving them [new forms of “marriage”] equal rights,” he told Swiss television prior to a referendum on same-sex “marriage” last year. He simply added that traditional marriage, with husband and wife, with children and grandparents, does not “get forgotten” because such a traditional marriage is an “enrichment” for society.