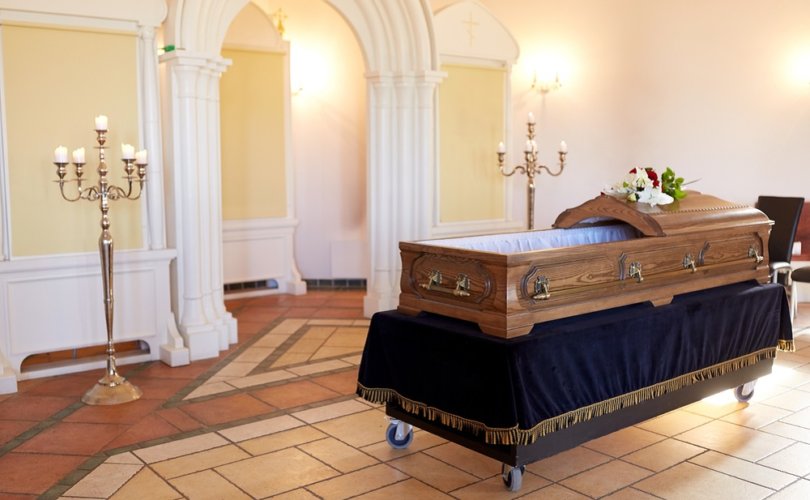 DETROIT, November 15, 2019 (LifeSiteNews) — The mother of a teenaged boy who killed himself has filed a lawsuit against a priest and the Archdiocese of Detroit, alleging harm caused by the priest’s funeral homily that shared Catholic teaching about suicide.

Linda Hullibarger is alleging that Fr. Don LaCuesta of Mt. Carmel Parish, Temperance, Michigan, “caused irreparable harm and pain” with his homily at a funeral Mass for her son.

According to her lawyer’s press release, the priest allegedly violated the “family’s privacy” while “turning the homily into his own personal message on suicide.” The Charles Boyk law firm filed suit in Wayne County, Michigan, and names as defendants the archdiocese, Our Lady of Mount Carmel Parish, and Fr. LaCuesta.

In December 2018, Linda and Jeff Hullibarger met with Fr. LaCuesta to plan the funeral for their son, Maison (18). According to their lawyer, the Hullibargers told the priest that they wanted him to “deliver a positive, uplifting and loving message that celebrated the life of their son.”

When Fr. LaCuesta delivered a homily that offered comfort to the grieving but also Church teaching about the gravity of suicide, the Hullibargers were angered.

In his homily (read full homily here) at Maison Hullibarger’s funeral Mass, Fr. LaCuesta reflected on Church teaching about the gravity of taking one’s own life and also the hope of resurrection. There is no mention of Hell in the copy of the homily provided by the archdiocese. He said, for example: “Nothing — not even suicide — can separate us from the unconditional love of God.”

Linda Hullibarger demanded that the archdiocese remove Fr. LaCuesta from his parish. Attorneys for the Hullibargers stated that the filing “seeks to hold Father LaCuesta, Our Lady of Mt. Carmel Parish, and The Archdiocese of Detroit accountable for the actions of Father LaCuesta and to ensure no further harm to the parish and local community.”

Additionally, according to court records, the lawsuit demands “judgment against the Defendants for an amount in excess of Twenty-five thousand dollars ($25,000), plus costs, reasonable attorney’s fees, interest and such other relief as the Court deems equitable and just.” The archdiocese has not issued public comment about the court filing.

Reports about Fr. LaCuesta’s homily and the Hullibargers’ anger were immediately picked up by the secular media last year, garnering widespread criticism of the priest and the Church. As controversy whirled, the Archdiocese of Detroit suspended Fr. LaCuesta from presiding at funerals, while demanding that all of his future homilies be “reviewed by a priest mentor,” according to a press release from the Archdiocese of Detroit. According to the press release, Fr. LaCuesta is “getting help from professionals — on human, spiritual and pastoral levels — to probe how and why he failed to effectively address the grief of the family in crisis.”

About a week after the contested funeral, Fr. LaCuesta told his parish of his “regret” and that he was engaging in “deep interior reflection” with the help of others over the incident.

Pro-LGBT priest Fr. James Martin, S.J. told the New York Times that the homily in question was a “pastoral disaster.” He said a funeral homily should “speak about not only the person’s life but the resurrection and the promise of new life of that person,” as well as offer consolation.

Fr. LaCuesta received notable support, however, from Fr. John Zuhlsdorf, who is better known as “Fr. Z.” In criticizing those who presume that everyone goes to heaven, “except perhaps Hitler,” and expect funerals to be celebrations of life, Fr. Zuhlsdorf wrote, “No. Funerals are for praying for the mercy of God on the soul of the deceased, no matter how he dies.”

Attorney Donald R. McClarey wrote at The American Catholic, “Father LaCuesta was thrown under the bus, a fate that is typical for any priest who acts like a priest instead of a social worker.”

According to the Catechism of the Catholic Church, all persons are responsible for their lives, as “stewards, not owners, of the life God has entrusted to us. It is not ours to dispose of.” The Catechism in its current edition says the sin of suicide breaks from solidarity with family, nation, and society. “Suicide is contrary to love for the living God.”

However, it notes that “grave psychological issues,” such as “anguish, or grave fear of hardship, suffering, or torture can diminish the responsibility of the one committing suicide.” Believers are called to hope for the salvation of persons who have taken their own lives, the Catechism declares, while the Church continues to pray for them.

My heart goes out to you, Mr. & Mrs. [REDACTED], and to you [REDACTED]'s siblings: [REDACTED], to Grandma [REDACTED], to [REDACTED]'s many aunts & uncles & cousins. It is with great difficulty that I stand before you knowing the pain and anguish you are going through. But I am aware, as well, that I am only a humble, unworthy mouthpiece. I ask God to use my words to bring the light, comfort and healing you need.

Is there any hope to offer in this moment? Must we only speak of our profound grief, our indescribable sorrow, even our anger and confusion at how such a thing could have happened? Is there any word from God that might break into our darkness like a ray of light?

Yes, yes, a thousand times. If we Christians are right in believing that salvation belongs to Jesus Christ, that it does not come from us–and that our hand cannot stop what God allows for us, then yes, there is hope in eternity even for those who take their own lives.

Having said that, I think that we must not call what is bad good, what is wrong right. Because we are Christians, we must say what we know is the truth – that taking your own life is against God who made us and against everyone who loves us. Our lives are not our own. They are not ours to do with as we please. God gave us life, and we are to be good stewards of that gift for as long as God permits.

The finality of suicide makes this all the worse. You cannot make things right again. Neither can [REDACTED]. And this is much of the pain of it all. Things are left unresolved, even if it felt to [REDACTED] like this was the only way to resolve things. You want to turn the clock back and say, “Please don't give up. We can work through this pain together. ” But now you will have to work through this pain by yourselves, or with those close to you now who will need to lean on you even as you lean on them.

On most people's minds, however, especially of us who call ourselves Christians, on our minds as we sit in this place is: Can God forgive and heal this?

Yes, God CAN forgive even the taking of one's own life. In fact, God awaits us with his mercy, with ever open arms. Sacred Scripture says clearly: God proves his love for us in that while we still were sinners Christ died for us (Romans 5:8). God's abiding mercy is what sets us to ask for it.

Although God doesn't dangle his mercy like a carrot, waiting for us to ask for it in order to receive it, we do have to believe in our hearts, express with our words, and show in our actions – that it is always there. God wants nothing but our salvation but he will never force himself on us, he will not save us without us. That's how much he loves us.

Because of the all embracing sacrifice of Christ on the cross God can have mercy on any sin. Yes, because of his mercy, God can forgive suicide and heal what has been broken.