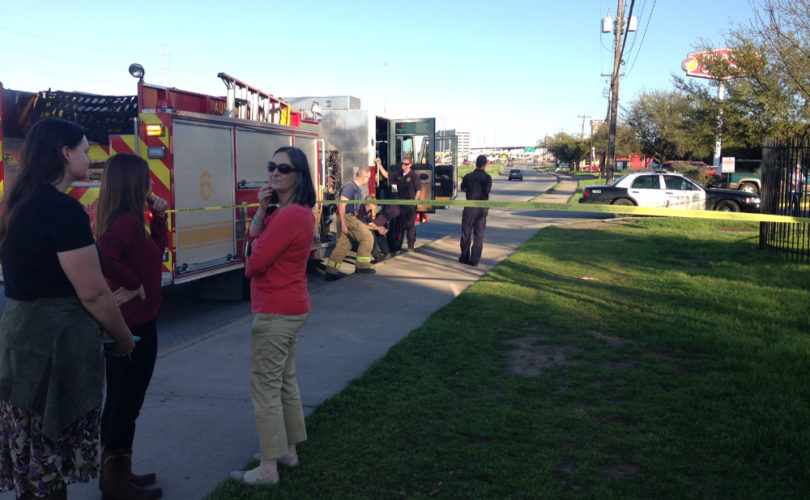 Emergency officials on site after a woman threw a molotov cocktail at pro-life activists in Austin, Texas.Courtesy of Texas Coalition for Life

AUSTIN, TX, March 24, 2015 (LifeSiteNews.com) — Last night at an Austin Planned Parenthood abortion facility, a woman threw a Molotov cocktail (a type of homemade bomb) at a group of Central Texas Coalition for Life prayer volunteers. One of the volunteers was able to quickly stomp out the flame and save the group from any danger. The group was able to record the woman's license plate number and turn that information over to the police. Police did arrest the woman who threw the bomb directly at the prayer volunteers.

Central Texas Coalition for Life Executive Director Heather Gardner responded last night. “We are so thankful that none of our courageous volunteers were injured during the incident. Because of their quick actions, the woman responsible was apprehended and will be held accountable.”

Abby Johnson, the board president for the organization, added, “In the culture of death perpetrated by abortion supporters, it is no surprise that they would respond to our prolife efforts in this violent way. We must remember that this type of incident is very rare and it will in no way deter us from offering real options to women walking into abortion facilities. We are here to promote peace in and out of the womb, something abortion supporters do not understand.”

The Central Texas Coalition for Life is asking for prayer for the woman who tossed the bomb at their volunteers. “We know that many women are hurting from past abortion experiences. One of the ways people sometimes lash out is through anger and violence. We pray for this woman and pray for healing in her heart if she is hurting from a past abortion,” says Gardner.