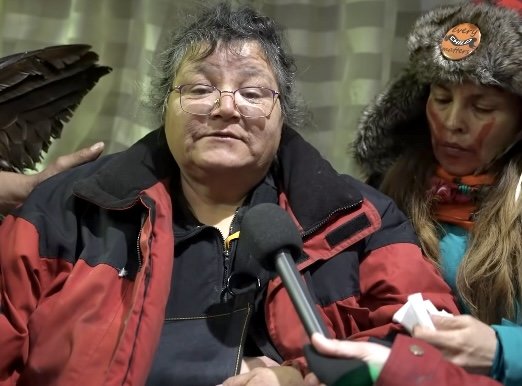 Freedom Convoy supporter Candice Sero is recovering from injuries sustained when she was trampled by an Ottawa police horse.YouTube

OTTAWA (LifeSiteNews) — The elderly woman trampled by a police horse during the Freedom Convoy crackdown spoke out against Prime Minister Justin Trudeau and law enforcement over their forceful conduct.

Just days after Aboriginal elder Candice Sero was trampled by a police horse while on her mobility scooter after Trudeau’s invocation of the Emergencies Act, Sero spoke to Rebel News to condemn the egregious actions the prime minister signed off on as a means to end the peaceful demonstration.

“Bumped and bruised, and sore, but I live to stand another day,” Sero told Rebel News reporter Alexa Lavoie, who herself was beaten and shot with a tear-gas canister by police while covering the Freedom Convoy protest.

“After they trampled me, there was a[n] officer, I think a couple of them kicked me, I got a big bruise on the back of my thigh … And another one dragged me by my coat off the premises … ” explained Sero, adding that it was within the Convoy, not near the police, that she “felt safe.”

Sero described her injuries as severe bruising on a leg, a fractured collarbone, and sore ribs.

As reported by LifeSiteNews, the trampling of Sero happened just hours after the police announced they were taking to the streets on Friday to disband the protesters. With Trudeau invoking the never-before-used Emergencies Act earlier in the week, the police had access to resources they would not normally have, including federal law enforcement and cooperation with banks to enact financial sanctions.

Sero explained that the reason she was at the Convoy was to help open people’s “eyes” to the actions of the government over the past two years. Sero outlined that “mothers and fathers” have had to suffer and die alone in nursing homes due to government-imposed restrictions limiting access to their families.

A mother and grandmother herself, Sero began to cry as she recalled the positive feedback she had received from other people since she joined the Convoy, including hugs and messages of support from other elderly people who are suffering from loneliness, and teenagers happy to see others standing up for their future.

Sero added that the importance of “human contact” and the devastating impact of being “deprived” of such an integral part of the human experience has had on people over the past two years, especially the elderly.

Told that Ottawa police claimed nobody had been injured after the horse trampling video went “viral,” Sero laughed and said, “That’s bullshit,” and reminded viewers that another man was also trampled in a way Sero thinks was more severe than what happened to her.

“Where did he go? I had the sense to get up on my own accord, but where did that guy go? … shoved under the rug?” Sero asked.

“How can we have trust in a prime minister that doesn’t come and speak to the people?”

Despite Trudeau announcing Wednesday that he was revoking the Emergencies Act, one of the protest organizers, Tamara Lich, is still sitting in jail after her request for bail was denied by a judge who had previously ran as a Liberal Party candidate.

While the Emergencies Act is no longer in effect, it remains uncertain what will happen to those who have had their bank accounts frozen or have faced other consequences from law enforcement as a result of Trudeau invoking the Act.