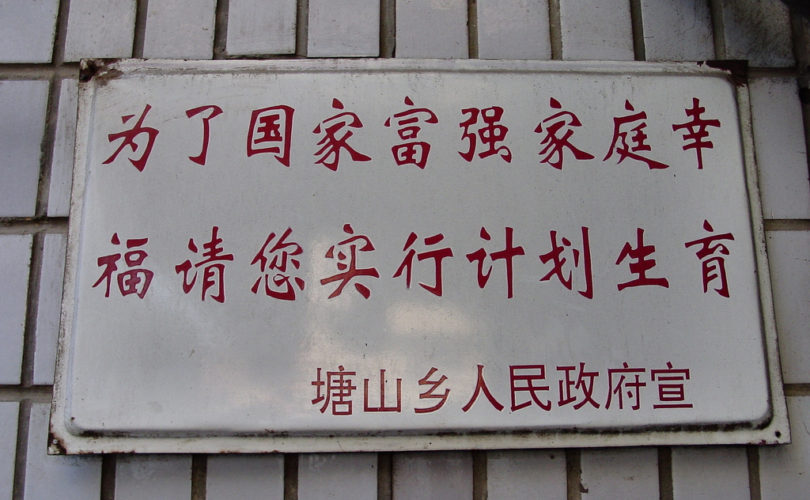 "Please for the sake of your country, use birth control."Wikimedia Commons

A Chinese woman has been refused asylum in the U.S. by a federal appeal court because she enforced the Communist government’s one-child policy for over 20 years.

Suzhen Meng, 61, admitted to a lower, federal circuit court in 2010 that her job as the security officer for 1,100 families in Wuhan, the capital city of Hubei province, required her to report violators of the One-Child Law, meaning their illegal pregnancies would be aborted.

She argued that she was only a bit player but Judge Reena Raggi disagreed, ruling, “Meng’s reporting of policy-violating women was no ‘minor’ action, but the critical step that set in motion the entire persecutory scheme of enforcement.”

Steven Mosher, president of the Population Research Institute and a strong critic of population control programs, told LifeSiteNews, “I’m not sympathetic to anyone who carried out the one-child policy, which is a huge human rights violation, a crime against humanity. I don’t think they should even be issued visas to visit the U.S., let alone granted asylum.”

Mosher said he had helped Chinese citizens who had participated in the policy, but only after they had recanted and tried to protect violators from the law. “Has this woman done anything to redeem herself?”

Meng claims she was jailed after refusing to levy a security fee on her families, and for reporting the policy chief for corruption. In jail she was beaten by guards. After her release she went to the U.S., where her sister works. She appealed Judge Raggi’s 2010 decision against granting her asylum. Now a three-judge appeal court has refused her again.

The one-child policy is somewhat a misnomer because of many exceptions: for example, if the first child is disabled; if the parents both belong to ethnic minorities; if they are both only children; and if the wife has no brothers and her husband agrees to support her parents in their old age.

On the other hand, it has many ugly extensions: an unborn child of parents too young (under 22 for him and 20 for her) to marry cannot be legitimized by their belated marriage: it must be aborted. After the first child, a woman must wear an intra-uterine device (IUD) and endure regular checks to ensure adherence. If a second child nonetheless is born, both parents are sterilized. Many abortions are physically forced on the woman by medical officers while police or soldiers hold her down.

The policy was implemented in 1979 and formally made law 20 years later. It came in response to a population burst encouraged by Communist dictator Mao Zedung, from 540 million in 1949 to over 800 million in 1980. The government claimed this was causing unemployment, declining health, and housing shortages.

“The one-child policy has meant the destruction of the traditional Chinese family of children, parents and grandparents living together under one roof,” Mosher told LifeSiteNews. “It has cut off the branches and roots and left only the trunk.”

Since 1996, amendments to the U.S. naturalization and Immigration Act have allowed Chinese into the country simply because they have been forced to have an abortion or be sterilized in enforcement of the one-child policy.