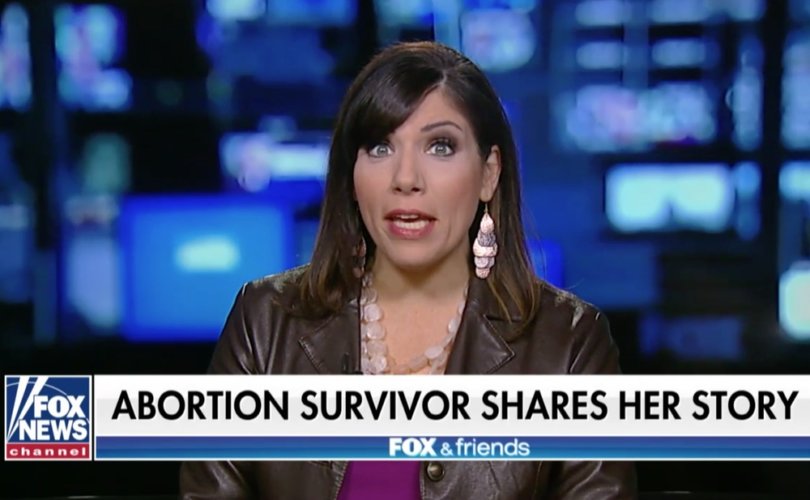 February 27, 2019 (LifeSiteNews) – Abortion survivor Melissa Ohden was not surprised that Democrats in the U.S. Senate blocked the Born-Alive Abortion Survivors Protection Act, saying the Dems are willing to sacrifice the lives of people such as her to protect abortion on-demand.

Ohden told the Fox & Friends program Tuesday she was outside the Senate chamber when the vote took place.

“I was disappointed,” she said. “I still am today but I’m certainly not surprised.”

“I think the Democrats who voted last night against this bill really showed us that they’re willing to sacrifice lives like mine to keep abortion-on-demand right there,” Ohden stated.

The Senate had voted Monday 53-44 in favor of the measure that would have ensured medical care for children born alive after failed abortions, but the Act needed 60 votes to pass.

It provided for fines and jail time for violations by health care practitioners, and exempted the child’s mother from penalty.

The bill was a response to radical legislation expanding abortion that’s been proposed and passed in recent months in various states, a move to protect abortion at the state level if Roe v. Wade were to be repealed by the U.S. Supreme Court.

Further highlighting the need for the bill was Virginia Governor Ralph Northam’s casual defense in comments last month of leaving a newborn child to die after the child survived a failed abortion should that be the decision established between parents and doctors.

Democrats tried to obscure the issue from the Senate floor as well, Sasse said.

“We heard, I think, six floor speeches from opponents of my legislation,” he said, “and I think four of them were filled with just this blatant nonsense that had nothing to do with anything that was in the text of the bill.”

Ohden addressed this in her conversation with the Fox News network Tuesday morning.

“And the Democrats continue to say things like this [law] is unnecessary,” she said. “I’m living proof that this is necessary.”

Ohden, founder of The Abortion Survivors Network, ran through details of her own story during her discussion with Fox.

After a failed saline infusion abortion over a five-day period in 1977, she was delivered on the fifth day, her mother’s labor induced with the intent of delivering a deceased child. However, she survived. It wasn’t until she was 14 that she learned the details surrounding her birth from her adoptive family.

Ohden said she was meeting a nurse later in the day that was present in the neonatal intensive care unit when another nurse rushed her in following her birth after the failed abortion.

Ohden recounted, “In her words, she said, ‘She just kept gasping for breath, and I couldn’t just leave her there to die.’”

Ohden was asked in the interview to reflect on her own life with this proposed legislation to save newborn survivors of abortion failing in the U.S. Senate, given she has two little girls, ten and four.

“I look upon their lives every single day and know that they never would have lived if that nurse that day wouldn’t have been willing to rush me off to the NICU,” Ohden stated. “You know, no child should have their (life) left in the hands of their abortionist or a medical professional to “somehow” decide to provide the medical care.”

“We need this bill,” she said, “not only to ensure we’re provided medical care, but that there’s a penalty when there’s failure to do so.”

Ohden said she is glad for the dialogue that the Act’s failure to pass has generated.

“It’s really unfortunate that we’re seeing this legislation sweep across the nation, and the Democrats block this bill,” she said, “but it’s a great opportunity to have a really in-depth conversation about late-term abortion, about infants who survive abortions.”

And this is just the beginning, she continued, explaining how she’d been talking to Republicans outside the Senate chamber Monday night.

The Republicans in Congress who are pro-life, a president who supports life, and a pro-life movement in America give her hope, she said.

Melissa shared her story with Jonathon Van Maren on his podcast The Van Maren Show several weeks ago. Listen below.