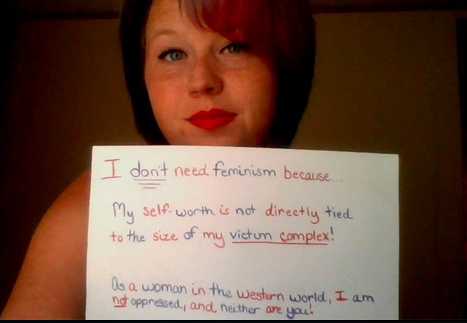 Critics of feminism have long said that it is entering the final stages of its long career, with more of its assertions about the nature of human sexual and social relations being contradicted by the evidence and fewer young people following its dictates every decade. But in the last few weeks, it seems that feminism’s last gasp is being used to direct insults at young women who are lining up to publicly reject and ridicule it.

The Tumblr site Women Against Feminism has started a social networking trend in which thousands of young women photograph themselves holding signs bluntly denouncing feminism, giving a sharp indication that the feminist brand has become poison to young, hip, and internet-savvy women.

Mainstream and journalistic feminists have lashed out at the site and its followers, entering into an online spat over the increasingly popular photos. The signs say, “I am not a victim,” and “This is what an anti-feminist looks like.”

They continue: “I am an adult who is capable of taking responsibility for myself and my actions. I define myself and derive my value by my own standards. I don’t need to be ‘empowered’. I am not a target for violence and there is no war against me. I respect me and I refuse to demonize them and blame them for my problems.”

The messages held by the women pinpoint with pithy and acerbic precision exactly the reasons given by many critics that the movement has lost favour with young people. They call it a creed of double standards that promotes victimhood and endorses bullying of anyone who critiques it.

The site’s explanatory page, which was taken down for unknown reasons in the last two days, said, “Feminists are the only people who lose their minds with rage when you tell them that women already have the same exact rights as men. That’s not good enough. They want more. They desperately want to be victims. They want a privileged social position.”

The author goes on to accuse feminism in general of systematic censorship, discrimination, elitism and “policing other women” who do not toe the line – as well as baseline misandry. The anonymous creator denounced feminism’s adoption of “abortion as ‘empowerment’”:

This opinion is unpopular, but I don’t agree that I need to have my baby scraped out of my uterus in order to feel empowered. But the abortion industry (i.e. Planned Parenthood) makes a ton of money off this perversion of empowerment. ‘Abortion as empowerment’ teaches women to see their wombs as nothing but garbage bins full of disposable waste.

Some come right out and say that feminism promotes exactly the evils it purports to fight against: “I don’t need feminism because I believe in equality, not entitlements and supremacy.”

Although the site and its contentious photos have been running around the internet for many months, arguments among journalism’s feminists started breaking out this week after a mocking Buzzfeed feature helped the site gain momentum on social media outlets.

Some feminist journalists simply flung insults. Lillian Kalish sniffed on Ryot, “These Women Who Think They Don’t Need Feminism Don’t Know What Feminism Is.” “Did these posters ever think to look up the actual definition of feminism?”

Nuala McKeever, in the Belfast Telegraph, called the women posting the photos “silly, ignorant, vacuous wee girls with absolutely no thoughts beyond their own self-absorbed inanities.”

Time Magazine’s Sarah Miller said, “I Really, Truly, Fully Hate ‘Women Against Feminism’—But…” Miller wrote, “[T]he tendency to see sexism everywhere is proof that feminism is healthy and vigilant, and that is not necessarily a bad thing, because misogyny is insidious and rampant… We need feminism.”

But Miller added, “Still, the pain that we experience as women—even physical—does not give us the right to tell people there’s one way to think or feel, or to assume that we have some god-like understanding of everyone’s motivations.”

Cathy Young, however, responded in Time, saying, “Stop Fem-Splaining: What ‘Women Against Feminism’ Gets Right.” She writes, “The charge that feminism stereotypes men as predators while reducing women to helpless victims certainly doesn’t apply to all feminists—but it’s a reasonably fair description of a large, influential, highly visible segment of modern feminism.”

The site, Young says, “raises valid questions about the state of Western feminism in the 21st Century — questions that must be addressed if we are to continue making progress toward real gender equality.”

Sarah Boesveld wrote in the National Post on Friday that the site shows that feminism has become “complicated” and “sometimes alienating.” She quotes an email sent to the paper by 22 year-old Australian Lisa Sandford, who “believes in equality for the sexes” but firmly rejects feminism as “rude and nasty” and intends to be a stay-at-home mother.

Sandford wrote, “If feminism really accepted equality, they would not tell me my views are wrong, they would accept it and let me be.”