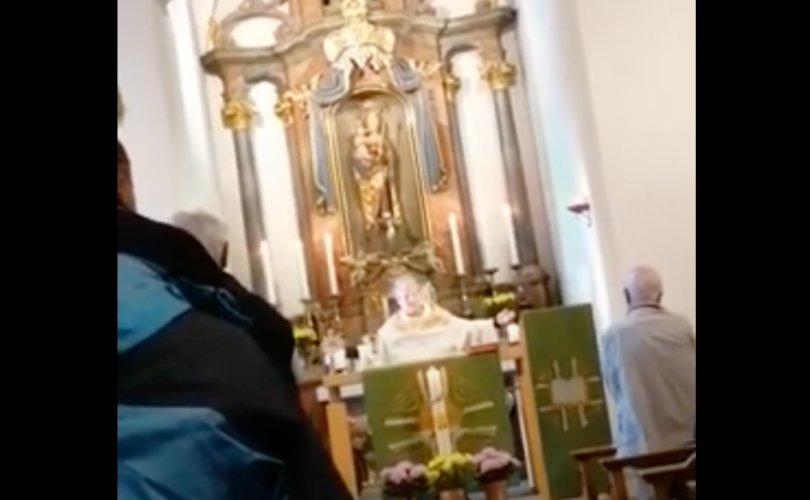 BASEL, Switzerland, July 28, 2020 (LifeSiteNews) – Women in the Swiss Diocese of Basel are putting on vestments, standing at the altar, and essentially simulating a Catholic Mass, without the local bishop stepping in.

A video published by La Nuova Bussola Quotidiana shows a woman performing what in a real Mass would be the offertory, moving on to the preface, and then proceeding with a longer prayer, where in an actual Mass the Eucharistic prayer, including the words of consecration, would be said.

The event took place in a chapel in beautiful Rigi-Kaltbad, overlooking Lake Lucerne. While the woman omitted the words of consecration, the other parts of the liturgy – which has no precedents before the Second Vatican Council – seemed to follow the structure of a real Mass.

The pro-homosexual Diocese of Basel, headed by Bishop Felix Gmür, is arguably the most liberal in the German-speaking parts of Europe, certainly eclipsing other places led, for instance, by Cardinal Reinhard Marx or Cardinal Christoph Schönborn.

A look at the parish newsletter, which was published during the COVID-19 pandemic and has since been replaced by the offline parish bulletin, never shows a “Holy Mass” being listed. All liturgical events are simply called “worship services” (Gottesdienst). Gottesdienst can be used to describe any liturgy, for instance, Mass or Vespers. In this case, however, it seems to be deliberately vague in order to not distinguish between “liturgies of the word” and “Holy Mass.”

Sometimes, women lead them, whereas other times, men are in charge. Anita Wagner, a woman, was responsible for two events, on Pentecost and Trinity Sunday.

There were two other services each Sunday led by laymen. The only Holy Mass each Sunday was celebrated by Father Emilio Näf, who is shown on the website wearing ordinary clothes rather than the Roman collar of a priest.

However, even when Fr. Näf was actually celebrating Mass, the newsletter merely noted, “Worship service with Emilio Näf,” not indicating he was a priest.

Dr. Peter Kwasniewski, theologian and LifeSiteNews columnist, explained that “the faithful rightly expect, and the Church rightly demands, that the public worship offered in a Catholic church should correspond to what is given in the liturgical books, and should not cause confusion or scandal.”

He referred to Redemptionis Sacramentum, a Vatican instruction approved by Pope John Paul II in 2004, which points out that anyone making up liturgies “injures the substantial unity of the Roman Rite, which ought to be vigorously preserved, and becomes responsible for actions that are in no way consistent with the hunger and thirst for the living God that is experienced by the people today.”

Arbitrary actions, the document states, “are not conducive to true renewal, but are detrimental to the right of Christ’s faithful to a liturgical celebration that is an expression of the Church’s life in accordance with her tradition and discipline.”

Kwasniewski said, “There is no provision for doing a ‘dry Mass’ in the manner described. In fact, the last so-called ‘Missa sicca’ or Mass without a consecration but with all the other parts was the medieval Palm Sunday liturgy, which was modified in 1954 under Pius XII, who effectively abolished it.”

“Nevertheless, this Missa sicca would only have been done by a priest; it was, and remains, inconceivable that a woman would simulate or seem to simulate a Mass,” he added. “Catholics in Basel would not be allowed to attend such a service, and the personnel who are pushing it ought to be disciplined by the local authorities or at least by the Vatican.”

In German-speaking countries, so-called “liturgies of the word” – lay-led worship services with distribution of Holy Communion, but without the words of consecration – are an official and common part of parish life.

The “liturgies of the word” go back to the Second Vatican Council. In the document on the liturgy, Sacrosanctum Concilium, the council fathers wrote, “Bible services should be encouraged, especially on the vigils of the more solemn feasts, on some weekdays in Advent and Lent, and on Sundays and feast days. They are particularly to be commended in places where no priest is available; when this is so, a deacon or some other person authorized by the bishop should preside over the celebration.”

In some churches, including the one in Rigi-Kaltbad, this has turned into its own organized “worship” service every Sunday.

The 1964 instruction Inter Oecumenici, the official Vatican interpretation of Sacrosanctum Concilium, explicitly states, “The plan of such a celebration shall be almost the same as that of the liturgy of the word at Mass. Normally the epistle and gospel from the Mass of the day shall be read in the vernacular, with chants, especially from the psalms, before and between the readings. If the one presiding is a deacon, he shall give a homily; a nondeacon shall read a homily chosen by the bishop or the pastor. The whole celebration is to end with the universal prayer or prayer of the faithful and the Lord’s Prayer.”

The German-speaking bishops have approved liturgical books to perform “liturgies of the word,” including the distribution of Holy Communion from the tabernacle.