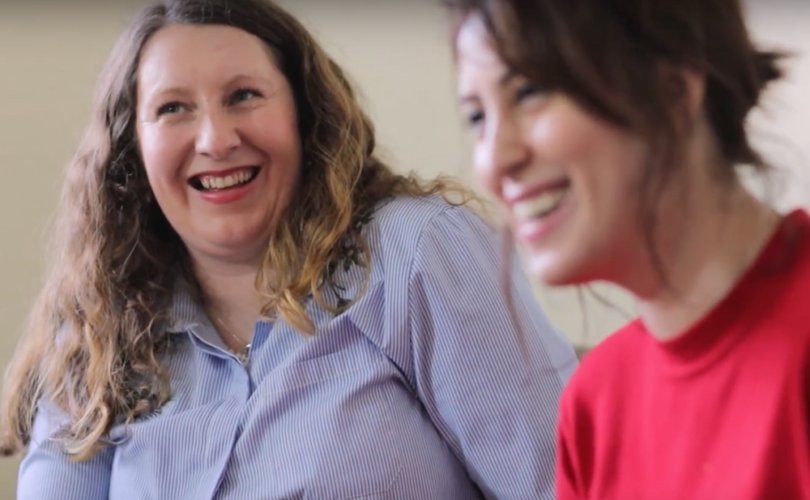 UNITED KINGDOM, March 29, 2018 (LifeSiteNews) – Mothers who chose life thanks to last-minute intervention outside abortion facilities are banding together to stop lawmakers from denying other women the same help.

Wednesday saw the formal announcement of the Be Here For Me campaign protesting the introduction of buffer zones, which the campaign says are better described as censorship zones, around abortion facilities in the United Kingdom.

“Assistance at the gate includes counselling, help with food, baby clothes, rent, housing and legal advice among many other things,” the group’s website says.

“Censorship zones would shut down help where it is needed the most.”

Last fall, the Ealing city council in London voted for a “public space protection order” to keep pro-lifers from the community’s Marie Stopes clinic, with 69 votes in favor, two abstentions, and no votes against. In January, a council cabinet unanimously began a public consultation period on the measure. The Portsmouth city council has also voted for such a ban.

These bans are justified by claims that pro-life activists routinely harass women entering abortion facilities. But Be Here For Me says that no arrests or prosecutions have ever been made against an Ealing pro-lifer in the more than 20 years since pro-life vigils began in the community.

In a statement to LifeSiteNews, Be Here For Me spokesperson Clare Carberry said that nine women who chose life brought their children to a recent Ealing town hall on the issue, where “not one council member asked them a single question,” despite the buffer zones ostensibly serving women’s interests.

“One councillor loudly protested their presence in the chamber,” she added, “saying ‘What are these women doing here? They shouldn’t be here! This has got nothing to do with them!’”

Still, there’s pressure to take those efforts nationwide. In October, 113 British Members of Parliament called on UK Home Secretary Amber Rudd to ban pro-life vigils outside of all UK abortion facilities, something Rudd also wants to do.

The Be Here For Me campaign’s work to combat this pressure includes providing volunteers to support women who want to keep their babies and helping people contact their Members of Parliament urging them to oppose censorship zones.

Most distinctively, the campaign’s work includes collecting the firsthand accounts of women who are thankful for the kinds of voices pro-abortion politicians want to silence.

A woman using the pseudonym Betty, for instance, says she scheduled an abortion while feeling “hopeless and helpless.” She had a boyfriend who didn’t have steady work. She had no job of her own due to morning sickness. But in what she believes was divine intervention, she missed a bus to the appointment which led her to cross paths with a woman named Lorraine.

“I told her that I had a problem with accommodation and that was why I was there for the abortion and after listening, she called the Good Counsel Network office and asked about accommodation,” she says. “When she got off the phone she said it would be possible to offer a house to stay in.”

At Marie Stopes, a receptionist was angered to hear Betty’s decision not to go through with it, but Betty was just relieved to have a new home –and her baby Isaiah.

“You know, the God that we serve is more than enough! The Good Counsel went well above my expectations,” Betty says. “Not only did they give me a home to live in, but they also helped me apply for a UK visa. Now we have a home and a visa to stay in the country.”

Another mother, Alina, says that contrary to the “pro-choice” narrative surrounding abortion, meeting a pro-lifer outside of Marie Stopes was the first time she felt she did have a choice.

“Once I decided to have the abortion I looked on the Marie Stopes website and it was written that they give you counselling and help to make the right decision,” she recalls. “I called them and said, ‘can I have some help?’ They said, ‘the only thing we offer is just abortion, nothing else.’” By contrast, “I walked into the Marie Stopes clinic and a woman standing outside offered me a leaflet. I asked what it was and she said she could offer help if I wanted it.”

Today, Alina and her daughter pray and hand out leaflets alongside those pro-lifers, an experience she says proves the narrative about pro-lifers “harassing” women is completely false.

“We are just 3 people holding a rosary and my daughter was playing. There’s nothing shocking or graphic on the leaflets,” Alina explains. “My daughter saw the picture of the developing baby on the leaflet and she said ‘Mummy look it’s a baby’, then she kneeled down and kissed the picture., there’s no harassment going on.”

Carberry says that while pro-abortion protesters such as the group Sister Supporter “create an enormous protest carnival” with megaphones, boom boxes, and placards, pro-lifers “are doing the actual work of helping women,” from food and financial assistance to babysitting, emotional support, paperwork assistance, and more.

Be Here For Me “is run by the women who have been helped and by those who help them because everyone, from the media, the political class, the comfortable class and yes, even many professing Christians, run hard away from them,” Carberry told LifeSiteNews. “If they respect women as they claim to do, then why do they not respect the voices of these women?”

“Surely even a pro-choice person can see that denying the offer of help to women who have nothing is a profoundly anti-choice move,” she added.