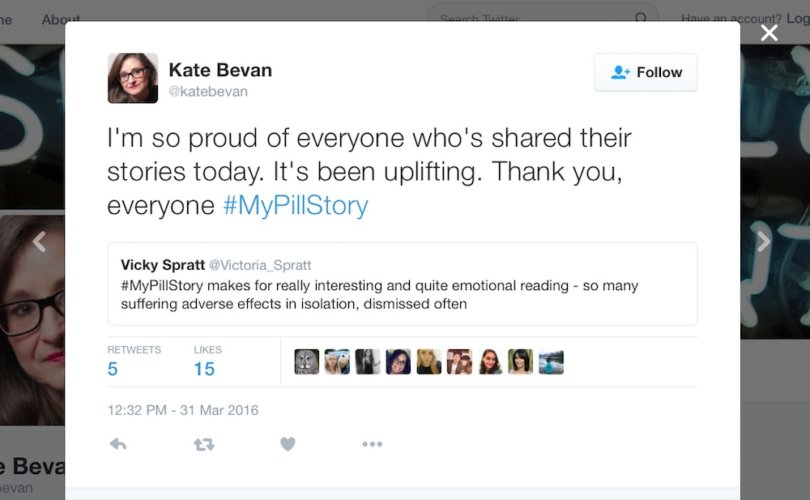 April 6, 2016 (LifeSiteNews) – Accounts of the Pill’s negative side effects have been trending on Twitter, with a stream of women coming forward to share their chemical contraception horror stories gaining notice in the unlikely forum of the feminist press.

Women’s magazines have long championed the birth control pill as a liberator of women, but the #MyPillStory hashtag detailing the Pill’s medical downside has gotten coverage from a number of such outlets in the U.S. and the UK, such as Glamour, Huffington Post, and Stylist Magazine.

Twitter accounts of devastation from the Pill began March 31 and have continued since, one sharing, “T1Diabetic and the pill messed up my sugar levels so bad I developed an abscess, my sight damaged and had to leave college.”

The story took off after UK journalist Holly Brockwell tweeted her frustration over fighting with England’s National Health Service’s (NHS) to sterilize her, according to Glamour. She wanted the procedure because the pill caused her dizziness, vomiting, skin problems, bleeding and pain. Brockwell had either been told to take the Pill or that her boyfriend could have a vasectomy.

“Do you know what it’s like to bleed for a month?” Brockwell challenged a male on social media who questioned her effort to be sterilized. “Have you spent mornings off work because you’re throwing up from hormones you don’t need in your body? Have you called the NHS direct because your leg feels weird and you’re worried your high-risk pill has given you a fatal blood clot?”

“One pill made me bleed so much for so long that I was on iron tablets for months afterwards,” she’d also stated.

“I can't take the pill because it gives me migraines, mood swings & weight gain,” was the reply from Kate Bevan, who came up with the hashtag.

Brockwell was clear in her posts she is not anti-pill; instead she opposes people telling her dismissively to take the Pill, particularly men.

But the campaign opened the door to the difficulties caused by chemical contraception, one Twitter user offering, “One pill I took … not only made my body feel alien but then started making me violently sick once every hour.”

The physical complications from oral contraceptives are well-documented, such as risk of blood clots, hair loss, greater chance of Crohn’s Disease and brain shrinkage, breast cancer, hardening of the arteries, increased risk of glaucoma  and cervical cancer.

Some of the #MyPillStory posts demonstrated this, one stating, “Headaches, severe mood swings, nausea, vomiting and the autoimmune issues I have were all gifted to me from hormonal bc.”

But many also showed how the Pill is related to mental and psychological maladies as well.

“#MyPillStory depressed, lethargic, dissociated. sleeping for over 12 hours a day and still exhausted. reluctant to ever try it again,” one stated.

“I dealt with crushing depression and suicidal ideation for days in a row not realizing what was happening,” came from another, and still another saying, “On pill for a year before I realised it was why I was experiencing crippling gender dysphoria. By then I'd already quit my job.”

“Took the pill when I was 18 cried everyday for a year, high anxiety, no libido, no idea what was going on until I stopped,” one person tweeted. Another said, “It made me lose my mind. I wasn't myself. Suicidal and scared. Seems I'm not alone.”

Brockwell recently learned she will get her sterilization from the British government in the next few months, but her personal campaign to avoid pregnancy ultimately shed light on the dangerous chemical option millions of women use to achieve the same.

“This whole thing is straight-up terrifying,” one of her tweets stated. “Can't wait to get off the pill.”