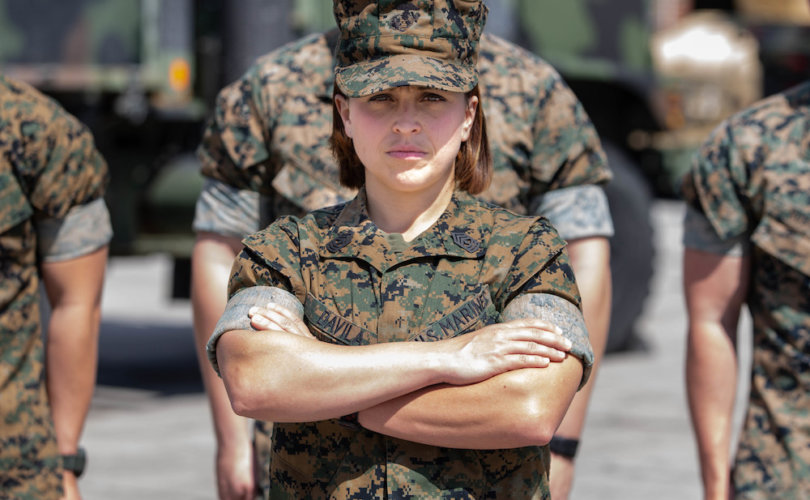 March 27, 2020 (LifeSiteNews) – If America ever again mandates its citizens into military service, it should draft women to serve alongside men, according to a new report released this week by a military panel.

After undertaking what it calls “extensive deliberations,” the National Commission on Military, National & Public Service recommends that women ages 18 to 26 be required to register for the Selective Service pool alongside men, Fox News reported, as part of a broader effort “to modernize, enhance and improve America's system to draw on the talents, skills and abilities of all Americans if a national emergency requires lawmakers to do so.”

“Should future circumstances become so dire that a draft is required, it is in the national security interest of the United States to be able to draw on the best talent in the country for military service,” according to the commission's report. “Roughly doubling the pool from which the nation might obtain conscripts would improve military readiness by raising the quality of those who might serve, as some women would be more qualified to serve than some men.”

Politico reported that the Pentagon has yet to comment on the recommendation. The Hill noted that Congress created the National Commission on Military, National & Public Service in 2016 specifically to examine this question.

Rep. Mac Thornberry, R-Texas, who sits on the House Armed Services Committee, was noncommittal beyond a statement that he will give all of the Commission’s recommendations “attention and consideration,” and “look(s) forward to examining the data and arguments the commission has compiled more closely.”

Last year, Senior U.S. District Judge Gray Miller ruled that limiting the draft to men was discriminatory, as women already serve in most other capacities in the military. The Trump administration appealed the ruling.

Critics oppose extending the draft to women for both practical reasons of military effectiveness and out of cultural concerns, namely the further erosion of differences between the sexes.

In 2016, Marine Corps veteran Jude Eden, who served in Iraq, shared why she was against drafting women for the front lines:

“The draft is for the sole purpose of replacing combat troops; it’s for replacing infantry,” she explained. “It’s not for playing in the band, it’s not for being a cook, it’s not for riding a desk to free a man to fight, as the saying went back in World War II. It’s to replace men when they’re dying by the thousands in the front who are attacking the enemy. Women don’t have an equal opportunity to survive in those circumstances.”

“We are being fed a bill of goods that this is about equal rights, and if women have equal rights then they should be drafted too. All of this is garbage,” Eden continued. “Equal rights do not mean that we must do the same things. It doesn’t mean that we can perform the same roles, especially when those roles require intense physical demand. No matter how prevalent feminism becomes, it will not make women’s bones as dense as men’s. It will not give us boundless supplies of testosterone coursing through our veins.”

“I mean, we can juice all our females and send them all to CrossFit, but they’re still not gonna be, against men who want to kill them, that’s not an equal opportunity to survive. They’ll target those women first. Women are higher-value targets not only as POWs, but as video fodder, for video propaganda to demoralize the country, demoralize the units, demoralize the war effort.”