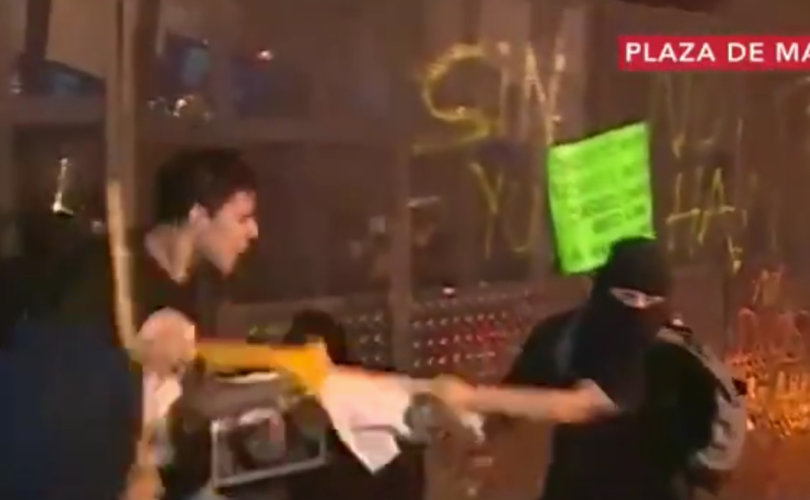 A man holding a Vatican City flag was pursued by protesters at the Metropolitan Cathedral in Buenos Aires, Argentina, on International Women's Day.C5N

BUENOS AIRES, Argentina, March 10, 2017 (LifeSiteNews) – Women who participated in an International Women’s Day march in historic heart of Buenos Aires covered the national museum with graffiti, attempted to set the Metropolitan Cathedral afire, and viciously attacked a lone man who bravely tried to defend the cathedral.

Startling video footage shows the man standing in front of the cathedral, quietly holding a Vatican City flag. He is approached by a masked women who attempts to take the flag from his hands. After that another woman lunges at him and tries to punch him in the head.

After that, hordes of women surround him, punching him, pulling his hair, and shoving him away from the cathedral.

Among the thousands of marchers on Wednesday were feminists, LGBT supporters, and members of the Socialist Workers Party dressed as Halloween witches. When their largely peaceful march ended with ceremonies at the Plaza Mayo, some marchers stayed to defile two of the city’s oldest buildings.

They covered the Cibalda, now a museum but 400 years ago the seat of government, with graffiti. They also attempted to set fire to the Metropolitan Cathedral, a frequent target, like other Argentine Catholic churches, of International Women’s Day marchers. Feminists and Leftists blame the Catholic Church for Argentina’s restrictions on abortion.

Held back by a temporary barrier and police, they pelted the latter with bottles and rocks. When they failed to set the church on fire, they succeeded in torching the fence.

The video of the lone defender of the catehdarl was posted by a Facebook page called LGBTears, with this caption. “This is a friend of ours. We met him years ago, and we know that he didn’t hit anyone or incite any violence. He went to defend the cathedral so that it was not vandalized. There are a lot of people saying he was smacking the participants of the march, but he didn’t touch anyone.”

Police dispersed the protesters with rubber bullets and water from fire hydrants. They arrested about 20 people allegedly involved in vandalism, but march spokespersons claimed they were innocent bystanders. They called the arrests “a witch hunt.”

This is far from the first time that feminist protests in Argentina have been marred by horrific violence. Videos from the annual Women's Day March in Mar de Plata show groups of Catholics trying to defend the cathedral against protesters, while being viciously assaulted by topless women who spit on them, throw bottles at them, spraypaint them, and attempt to set the church on fire.

Similarly disturbing scenes were seen in Posadas, Argentina, in 2012.