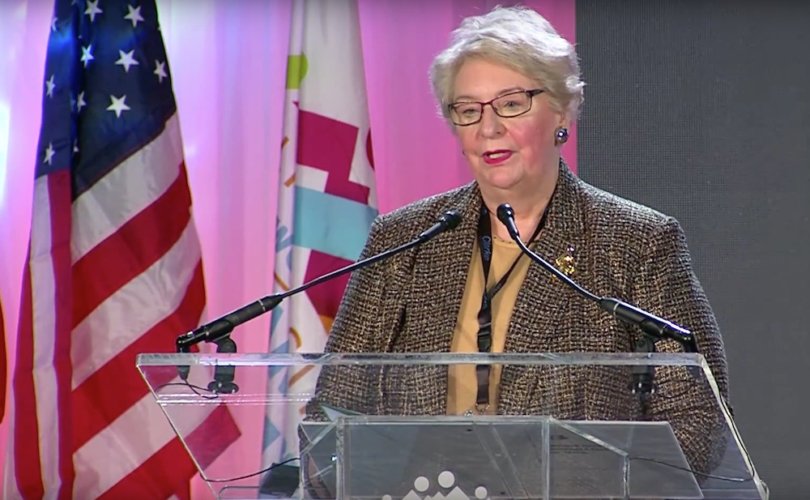 REAL Women of Canada's Gwen Landolt warns in a brief that the program used the courts to impose a feminist agenda on Canada.

OTTAWA, May 4, 2016 (LifeSiteNews) — Justin Trudeau’s Liberal government is making plans to resurrect a controversial program axed by Stephen Harper’s Tories ten years ago that previous Liberal governments had used to advance their agenda through the courts.

The Liberals’ March budget allocated $12 million over five years to restoring the Court Challenges Program, and last month the Standing Committee on Justice and Human Rights held hearings on the issue.

One of the most prominent critics of the program is REAL Women of Canada, which warned in a brief to the committee that it was the “appalling defects” of the previous Court Challenges Program that allowed special interest groups to use it to reshape Canadian society according to a feminist agenda.

In their brief, submitted to the committee April 14, REAL Women notes that the program helped widen abortion access by funding the Women’s Legal and Action Fund (LEAF), and advance the LGBT agenda by funding the homosexual activist group Egale.

In fact, Toronto-based activist lawyer Cynthia Petersen agreed, telling the committee that she was a “member of the LGBT community” and that “without the court challenges program, LGBT rights and the equality rights movement for LGBT communities in Canada would never have evolved in the manner in which it did.”

The Liberals could reinstate the CCP as it was, pointed out Manitoba Conservative MP Ted Falk and vice-chair of the justice and human rights committee, but “my understanding is they recognize that it was done away with for a reason.”

To that end, the committee heard evidence in March and April on the CCP. “They want to look at what was broken about the program,” Falk told LifeSiteNews, “to correct some of those things and make it better and more effective.”

Landolt slammed the previous CCP for “appalling defects” that made it the “most corrupt, discriminatory, and biased programs ever developed in Canada,” and a “national powerhouse directing traffic to and from the courts to change the direction of Canadian society.”

The CCP-funded groups “did not represent women, but only an ideology.”

Liberal Prime Minister Pierre Trudeau initiated the program in 1978, and in 1985, Conservative Brian Mulroney expanded it to include challenges to the Charter’s Section 15, the equality provision, which came into force that year.

With a mandate to fund Charter challenges by disadvantaged groups, the CCP maintained one panel for equality rights claims, another for language rights claims.

But because “the criteria were not defined in the mandate,” Landolt said, they were defined “according to the ideological biases of those who were managing the program.”

And because of the “incestuous relationship” between the program’s board of directors, advisory committee, and the equality panel, the CCP could “easily direct funding to those organizations that controlled the program,” she asserted.

In 2006, for example, four of the seven equality panelists were members of the Women’s Legal Education and Action Fund (LEAF), the other three of Egale, a homosexual rights advocacy group.

The committee heard evidence March 8 that the “largest number of cases” the CCP funded “were those of LEAF and of the homosexual organization Egale,” Landolt said.

Meanwhile, REAL Women “faced great discrimination from the committee because we didn’t go along with a lot of the LEAF or feminist philosophy,” she said.

Those included the 1989 Daigle vs. Tremblay case, in which the Supreme Court ultimately ruled that the unborn child has no legal status as a person.

CCP did not fund REAL Women’s intervention on the grounds that it was not a federal issue, Landolt noted, but her group discovered later, to “our shock and dismay” that the CCP funded LEAF’s involvement in the same case.

“We were involved in over 30 cases, most before the Supreme Court of Canada, but we had to pay every penny ourselves,” she said.  “There cannot be true equality when the court hears only one side of an argument.”

And, she added, “it’s a waste of taxpayers’ money to fund all these so-called rights, when only special people with special interests get funded.”

Landolt also excoriated the CCP for its lack of transparency, pointing to a “patently absurd” federal court clerk’s decision in 2000 that CCP applications and funding contracts were protected by “solicitor-client privilege.”

“Although funded by the taxpayer, the program was not accountable to the public, did not report to Parliament, and was not subject to the Access to Information Act,” she said.

She recommended “an impartial CCP that is not involved in special interest groups so there will be a fair access” and an open process.

Petersen recommended “a fair determination of how funding will be allocated so that it doesn’t create divisiveness among allies.” Under the previous program, “some got funding and some didn’t,” which created “problems,” she said. “It wasn’t really clear.”

Preparing “a case for Superior Court can easily cost a half million dollars” and that is “only in first instance proceedings,” she estimated. “Then there is the appeal, and then the appeal before the Supreme Court.”

LEAF executive director Diane O’Reggio told the committee the CCP had “functioned as an independent body” and “approached cases professionally, with a high level of ethics and independence.”

Since the CCP was abolished, LEAF has “continued to litigate equality cases, but it’s been at a significantly reduced capacity,” she said.

The committee “listened to a lot of legal experts, and of course, they like the Court Challenges Program because it funds their profession,” Falk told LifeSiteNews.

“We’ve listened to a lot of the special interest groups that did receive funding, and of course, they want to continue to receive funding to promote their agenda in the legal system.”

Landolt’s report was “very transparent” and she “did a very good job in articulating what she believed was a system that was very broken,” Falk added.

Although Falk “can’t determine what the Liberals may or may not do,” he expects the government to “use our study and its recommendations to determine how to structure the new program…I’m hoping they have pure motives.”

But when the committee will complete its study is unclear.

It has shelved CCP work in order to hear evidence on the government’s euthanasia bill, C-14, which began May 2.