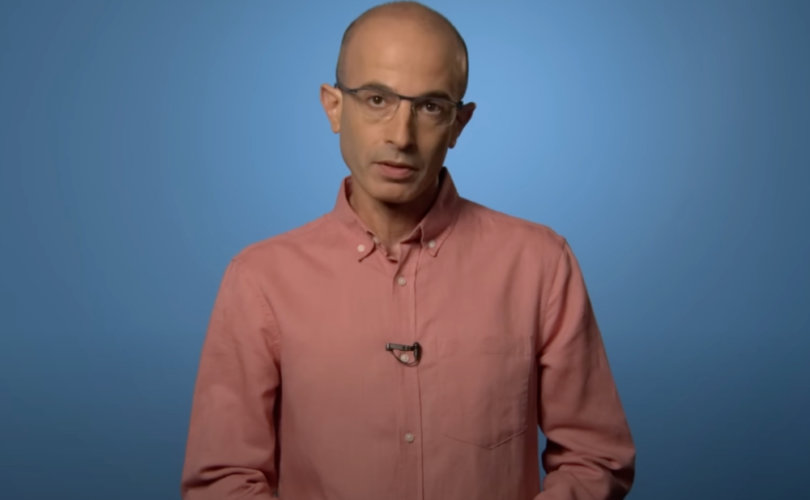 (LifeSiteNews) – Top World Economic Forum (WEF) adviser Yuval Noah Harari recently declared that the world does not “need the vast majority” of the current population due to technological advances.

Harari made the bold declaration in an interview with Chris Anderson, head of the popular TED media group, echoing past predictions of a “useless class” of “unemployable” humans.

Harai suggested that, in a departure from the 20th century, when the “big heroes” of political systems’ prevailing narratives were always “the common people,” now in the 21st century, people “are no longer part of the story of the future.” Instead, according to Harari, they have been replaced by artificial intelligence (AI) and displaced by a high-tech economy.

The author and lecturer presented to Anderson the “hypothesis” that anxiety about being displaced in the future economy by AI and a highly educated “tech” class is partly at the root of the world’s “disillusionment and backlash against the liberal order.”

“Part of what might be going [on] is people realize — and they’re correct in thinking that, ‘The future doesn’t need me. … Maybe if they are nice, they will throw some crumbs my way, like universal basic income.’ But it’s much worse psychologically to feel that you are useless than to feel that you are exploited,” Harari said.

“Now, fast forward to the early 21st century when we just don’t need the vast majority of the population,” Harari continued, “because the future is about developing more and more sophisticated technology, like artificial intelligence [and] bioengineering.”

Harari added that “these technologies increasingly will make redundant” “whatever people are still doing which is useful,” and will thus “make it possible to replace the people.”

While he conceded to Anderson that technologies such as AI will open up new and “more interesting jobs,” Harari argued that “it’s not clear that many humans will be able to do them, because they will require high skills and a lot of education.”

Anderson doggedly proposed ways in which human beings could — and he suggested, should — continue to play a valuable part in the world economy, or at least society.

“So again, trying to desperately apply some sort of more hopeful spin on this … a lot of the jobs that are being displaced are actually kind of boring jobs that don’t really tap into the core of what the human is,” Anderson said.

He went on to point out that “When you step back, there’s no shortage of things that need to be done,” including addressing the world’s “millions of lonely people.”

“People are really good at making lonely people not feel lonely, and pretty much anyone can do that,”  Anderson noted. “You know, communities are a mess. Pretty much anyone who lives somewhere could do, in principle, something to make a community better. They could paint a fence, or do some voluntary service, or whatever.”

Harari in turn argued that in order to “recogniz[e] activities like community building and raising families as jobs,” “we need a new economic and social model.”

When Anderson asked Harari whether he sees “any solution to that problem other than” more tax redistribution by the government, Harari replied, “That’s the traditional role of government. When the market isn’t efficient enough in redistributing the wealth, then this is the job of the government.”

Harari went so far as to suggest that wealth would need to be redistributed globally, so that the profits of tech companies in the U.S. and China could benefit people in countries less advanced in the tech domain.

“I would say that the biggest problem by far is not on the national level. It’s on the global level,” said Harari, who added that while he can envision redistribution of wealth from “tech giants in California” to “mothers in Pennsylvania,” he does not see that wealth being redistributed to “Honduras or Mexico or Brazil.”

“Is there any scenario where we could write ourselves back into this story in quite an important way as being the only things in the universe that we know of that are actually capable of the things that matter most in the universe — i.e., love, joy, creativity, the sort of that feeling of peace you talked about.

Technology can’t advise us on what are the things deepest in our hearts. We should not let it, we should retain control, in fact make our technology in service to those things. And in a sense, the relationship between technology and us — [technology] should regard sentient things as gods, that have superpowers it knows nothing of. No? Is that ridiculous?

Harari did not directly address Anderson’s point, but honed in on “the question of sentience and consciousness” as “the most important question in this regard,” and “the greatest riddle of science.”

Harari’s evasion of the question may stem from his less transcendent view of human beings, as reflected in his claim that “Homo sapiens rule the world because it is the only animal that can believe in things that exist purely in its own imagination, such as gods, states, money, and human rights,” a backbone idea of his book “Sapiens: A Brief History of Humankind.”

This idea is echoed in his famous assertion that we “should get used to the idea that we are no longer mysterious souls,” but are “now hackable animals.”

As a top adviser to the WEF’s head and founder Klaus Schwab, Harari’s view that the world now holds an abundance of “useless” people, together with his open degradation of human beings as equivalent to animals, raises the question of whether the WEF’s aims are shaped by such a view, and if so, to what extent.

Indeed, the WEF arguably places the environment, and not human beings per se, at the center of its priorities. It has partnered with the heavily pro-abortion and pro-contraception United Nations (U.N.), and the WEF’s Great Reset agenda has raised concerns of collateral damage to the livelihoods and well-being of people around the world.

For instance, some argue that the WEF seeks the premature relinquishing of fossil fuel sources in favor of “green” but expensive and unreliable energy sources in such a manner as to curb overall energy usage and hurt entire economies via a ripple effect.

More evidence of such a worldview is the WEF’s endorsement of COVID lockdowns, which resulted in waves of lost jobs, massive spikes in depression, upticks in domestic abuse, and other harmful effects. In fact, the WEF called for “more stringent” lockdowns, despite such worldwide misery, and praised the lockdowns for their effect of reduction in greenhouse gas emissions and pollution.