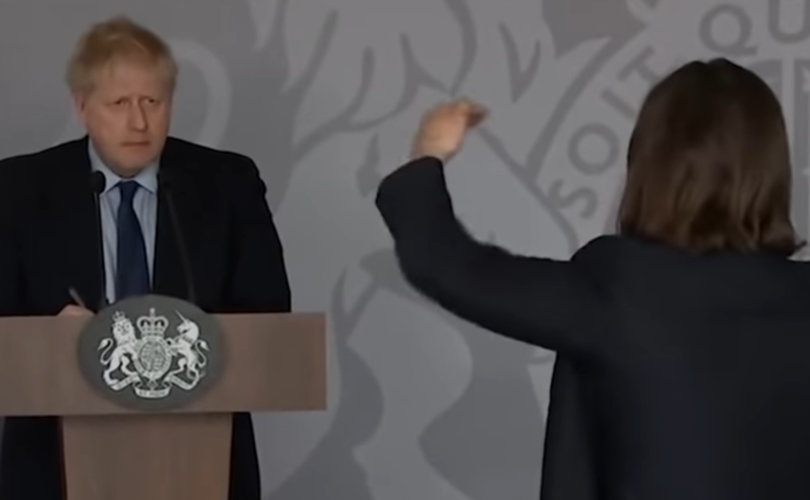 On Tuesday morning, Ukrainian journalist Daria Kaleniuk made an emotional demand to British Prime Minister Boris Johnson, asking him to instruct NATO to enter the war in Ukraine. After the event was praised in Western media, reports have surfaced showing that Kaleniuk is not just a journalist, but an activist who has ties to the World Economic Forum (WEF) and initiatives backed by leftist billionaire George Soros throughout Eastern Europe.

In the confrontation, Kaleniuk said NATO’s hesitancy regarding boots on the ground involvement in Ukraine is rooted in the fear that it would escalate the conflict to “World War 3,” but according to the activist, “[WW3] has already started.”

While her strong comments and emotional appeal to Johnson seemingly resonated with international media, Kaleniuk’s desire to bring the West into a foreign war in light of her deep ties to the globalist agenda’s has immediately caused suspicion.

Kaleniuk is currently featured on the WEF’s website as one its members. In 2019, the WEF included her among the list of many notable “Young Global Leaders” alongside prominent figures such as Canadian Prime Minister Justin Trudeau, French President Emmanuel Marcon, and American Democratic presidential candidate Pete Buttigieg.

The WEF is the organization behind the now-infamous “Great Reset,” a radical socialist plan designed by global elites to “reset” the world economy, and install a centralized, and heavily regulated totalitarian international system similar to that of China’s Social Credit System.

In fact, the WEF’s founder and chairman Klaus Schwab has consistently praised Chinese Communist President Xi Jinping, including a statement from this year in which he told the leader of China that his dictatorial regime has made “significant social and economic achievements” under his “inclusive” leadership. Schwab’s praise and reference to China as “inclusive” comes despite evidence that China is carrying out a genocide on its Uyghur Muslim population, is running a massive organ-harvesting program, and has been referred to by critics as the “nightmare of the world’s first truly totalitarian state.”

However, Kaleniuk’s globalist ties do not stop with the WEF. She is also the co-founder and executive director of the Anti-Corruption Action Center, an entity described as “a powerful national organization that has shaped Ukraine’s anti-corruption legislation and efforts.”

The Anti-Corruption Action Center receives funding and partners with the International Renaissance Foundation, a subsidiary of radical left-wing globalist George Soros’ Open Society Foundations. According to the Open Society Foundations’ website, the International Renaissance Foundation “was established in Kyiv in April 1990” and is at “the forefront of the effort by George Soros … to use his fortune to assist the former Communist states of Central and Eastern Europe.”

The site goes on to explain that Soros’ foundation has funded Kaleniuk’s foundation in a combined effort to “return” “millions of dollars” to “the state,” and out of the hands of alleged criminal actors.

In a statement on Saturday, Soros, much like Kaleniuk, called on all Western nation’s to get involved or remain involved in Ukraine, saying, “It is important that both the transatlantic alliance (the United States, Canada, the European Union, and the United Kingdom) but also other nations do whatever is in their power to support Ukraine in its time of existential threat.”