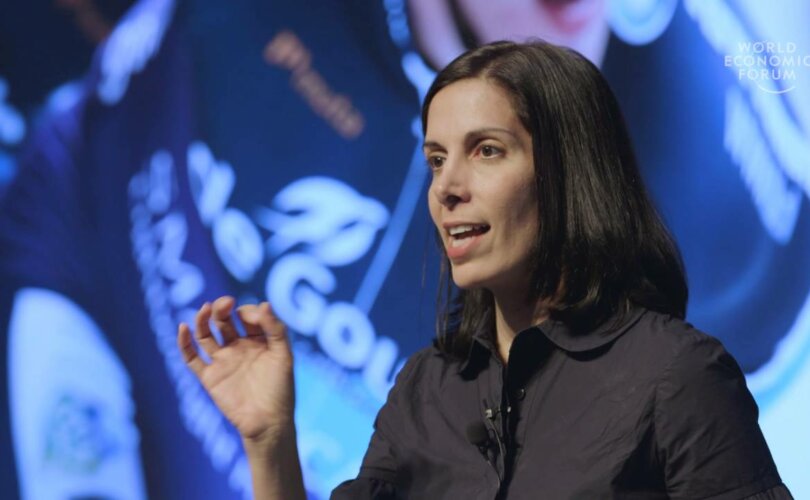 DAVOS, Switzerland (LifeSiteNews) — A World Economic Forum (WEF) speaker on Thursday hailed the “extraordinary promise” of the use of mind-reading devices in the workplace while admitting that they could be “the most oppressive technology” ever used at “large scale across society.”

Wearable mind-reading devices are not a figment of the future — they’re already here, asserted Nita Farahany, legal ethicist and author of “The Battle for Your Brain,” during her talk “Ready for Brain Transparency?” during the WEF’s 2023 annual meeting in Davos, Switzerland.

Like “Fitbits for the brain,” “already, using consumer-wearable devices — these are headbands, hats that have sensors that can pick up your brain wave activity, earbuds, headphones, tiny tattoos that you can wear behind your ear — we can pick up emotional states,” like happiness or sadness or anger, said Farahany.

“We can pick up and decode faces that you’re seeing in your mind, simple shapes, numbers, your pin number,” she explained, adding that such technology could therefore give access to “your bank account.”

.@WEF paints the picture of a terrifying future in which our brain activity is tracked and monitored at work… pic.twitter.com/lACkTQDgQD

During a WEF “Transforming Medicine, Redefining Life” panel discussion on Friday, she described such technology as being integrated into “multi-functional devices,” so that, for example, the same earbuds used to “take conference calls and listen to music” would be laced with EEG sensors to pick up brain waves.

What this looks like in practice is having the ability to, for example, “simply swipe with your mind” instead of with a mouse or keyboard.

Farahany focused on the potential such technology has to solve workplace problems, and opened with the dramatic example of truckers who can cost lives by falling asleep on the road. She shared how one trucker got into a fatal accident after trying to “take a 20-hour shot for a 1,500-mile ride, well exceeding the amount of time that any long-haul trucker is supposed to drive.”

His employer could have prevented such a “disastrous” outcome, said Farahany, with a “simple wearable hat” that, using “embedded electro-sensors,” could measure brain wave activity and gauge “what stage of alertness the person was experiencing and whether or not they are starting to fall asleep.”

She further argued that despite the existence of driver-assist technology designed to prevent such accidents, such brain-reading wearables are necessary because they intervene “much sooner” and “much more accurately.”

“We as a society should want that,” Farahany added.

It is why, she continued, “in over 5,000 companies across the world, employees are already having their brain activity monitored to test for their fatigue levels,” such as in the Beijing-Shanghai railways, where “train conductors are required to wear hats that pick up their brain activity,” or in “mining companies throughout the world.’

Farahany is calling for a “more nuanced conversation” about the technology because she believes that “done well, neurotechnology has extraordinary promise.”

She admitted, however, “Done poorly, it could become the most oppressive technology we’ve ever introduced in a large scale across society.”

Even more disturbing to employees, she acknowledged, is the prospect of brain-reading devices that can sense “whether a person is paying attention or whether their mind is wandering,” and what, more precisely, they are paying attention to.

Such technology can not only gauge whether someone is paying attention, and to what, but can intervene to get the mind back on track. Farahany shared that MIT Media Lab has already developed a “haptic scarf” that “giv[es] a person a little buzz — literally — when their mind starts to wander to help them to refocus and hone their attention.”

Wearable neurotech can now go so far as to detect what you are paying attention to, says @NitaFarahany. She predicts we may soon use this to help people snap to attention in the workplace, such as with the MIT Media Lab’s haptic scarf that “buzzes” when your mind wanders. #WEF pic.twitter.com/MJAFDBa1BP

According to Farahany, although we “can’t decode speech using simple wearable devices,” “that doesn’t mean there isn’t a lot we can already decode,” and she predicts that the breadth of what we can gather from the brain will considerably increase “in the coming days as AI becomes more powerful, as the sensors become more powerful.”

She believes an important defense against potential abuses of privacy using such technology is pre-emptively “recognizing a right to cognitive liberty, a right to self-determination over our brains and mental experiences,” and added that “it requires that we update existing international human rights … ”

With these fundamental rights in place, and “best practices” by which employers will only monitor things like fatigue levels when they could determine, for example, whether someone has “amorous” feelings for a co-worker, those employers will “respect the autonomy of the individual,” Farahany believes.

“Speaking as a CEO, I’m sure all CEOs will use it completely responsibly,” said moderator and Atlantic CEO Nicholas Thompson, to the laughter of Farahany and the audience.

At Davos, Farahany pointed out Friday that neurotechnology raises other ethical questions due to its ability to identify predictors of brain diseases such as Alzheimers decades before their onset. She questioned whether even if an individual doesn’t want to know if they are at risk, whether other people should “have the ability to know,” such as insurance companies and employers.

Despite calls by Farahany and others for regulation of such technology to ensure respect for human autonomy, Paul Joseph Watson of Summit News remarked that the very same people calling for its responsible limitations are those currently curbing the freedom of basic human rights, such as speech.

Watson said such technology’s “support and vision” is being suggested by what he refers to as “your technocratic overlords, the same people who are desperately trying to censor the Internet so they can’t be criticized,” referring to the WEF’s call for the merging of human and artificial intelligence to censor “hate speech” and “misinformation.”

In addition to mind-reading wearables, implants that can probe even more deeply into the human brain are currently being developed and tested. Last year, the first American man and the fifth person in the world was implanted with a Brain-Computer Interface (BCI), likened to a “brain bluetooth,” as part of a trial for the device. The trial participant has already been able to perform tasks like computer navigation using his mind alone, with the help of the BCI.

In fact, mind-reading devices are a treasured part of the transhumanist agenda championed by the WEF. In a 2016 interview with Swiss broadcasting group RTS, WEF founder and chief Klaus Schwab said that brain chips would be widely introduced “certainly in the next 10 years.”

On a May 2020 Joe Rogan podcast show, Elon Musk affirmed that while the “first few versions” of BCI implant technology would focus on solving brain injuries, he believes implant usage would expand to allow the general population to “telepathically” communicate with each other within “five to 10 years” if progress went smoothly.