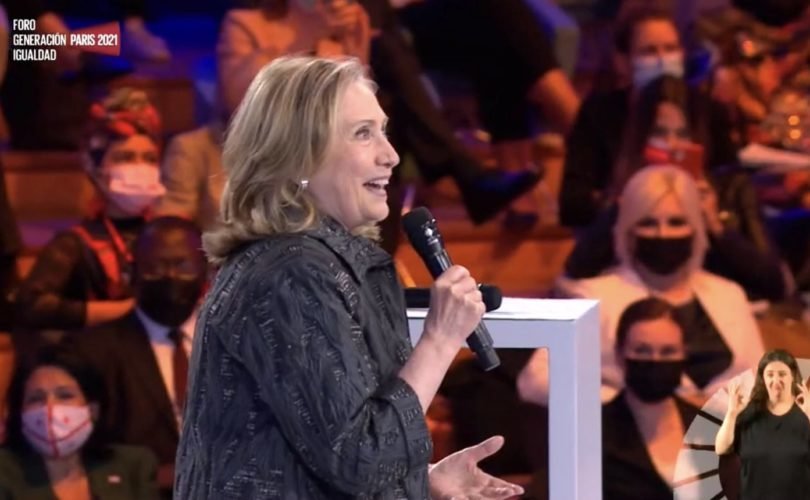 Hillary Clinton speaks at the Generation Equality Forum in Parish.

July 1, 2021 (LifeSiteNews) — Twenty-six years after the 1995 Women’s Conference in Beijing, the Generation Equality Forum underway since Wednesday in Paris under the auspices of the United Nations and the French and Mexican governments aims to drive major policy reforms the world over, fueled by investments of more than $40 billion.

The Forum’s first live meeting, which took place in the Carrousel du Louvre with French President Emmanuel Macron and Antonio Guterres, Secretary-General of the United Nations in attendance, stressed the need to fight for “gender equality,” “sexual and reproductive rights,” “safe and legal abortion,” and “LGBTQI” rights.

In 1995, attempts to introduce overt affirmation of “abortion rights” and gender ideology were countered by intense opposition and lobbying on the part of the Holy See, which was represented in its capacity as official observer at the UN. But this time around the Vatican appears not to have been invited and, clearly, the Paris meeting will include a push for worldwide implementation of the culture of death.

Speakers are repeatedly using language pertaining to “gender theory” against the “patriarchy” and not hiding the fact that they want abortion to be part of the “bold action to accelerate gender equality.”

Participants from all over the world, including many African countries, have been listening politely and even approvingly, without the least sign of discontent or disagreement.

The meeting opened Wednesday, June 30, on the fourth anniversary of the death of Simone Veil, whose name is closely associated with the legalization of abortion in France in 1975 – and Macron mention that fact, suggesting that the date was chosen deliberately.

The Generation Equality Forum has attracted dozens current and former heads of state, international functionaries and feminist leaders in addition to Macron, Guterres and President Andres Manuel Lopez Obrador of Mexico, the latter joining by video conference as co-organizer of an event that began in Mexico City earlier this year. Phumzile Mlambo-Ngcuka, who convened the Forum, also was present.

Many heads of state were unable to travel to Paris because of ongoing COVID restrictions but made video appearances while committing to cooperating with the Forum’s objectives.

In Macron’s opening remarks, he called COVID-19 an “antifeminist virus” because, he said, it has set back schooling for girls and pushed many women into poverty while exposing them to increasing “violence within the family,” although it is not the virus itself but lockdowns and government-mandated COVID restrictions that have harmed so many millions of people, men and women alike.

— Article continues below Petition —
PETITION: Stand with Hungary for protecting children from LGBT propaganda
Show Petition Text
44625 have signed the petition.
Let's get to 45000!
Thank you for signing this petition!
Add your signature:
Show Petition Text

Macron spoke of a “bad wind that is blowing again in many of our societies.” “Indeed,” he added, “there are reactionary, patriarchal forces that are trying to regain power in a form of what we could call a ‘conservative international.’” All this is “questioning decades of achievement,” he said.

The French presidents said it is time to act because “women who simply want not to wear a veil or to have an abortion are threatened.” “We are here to say that their struggles are our struggles; we are strong, strong thanks to the feminist agenda we will set today,” he said, linking the current fight for “gender equality” with the French Enlightenment. The revolutionary intent of this “struggle” is plain, even if figureheads of the so-called “Enlightenment,” such as Voltaire, were anything but favorable to women and their rights.

Macron added, “Through the Generation Equality Forum, France’s objective is to state loud and clear that the rights of women and girls are universal, as are all human rights, everywhere, all the time. This model that France defends is not a negation of our differences. It is about reaffirming that no cultural or religious relativism, no regional or identity-based particularism, justifies that a woman not enjoy the same rights and the same opportunities as a man. Our method for achieving this result is concerted international action, what I have called multilateralism through action.”

He made very clear that gender equality, in the eyes of our world leaders, is an absolute “value” and religious convictions are a manifestation of “relativism.” It would be more precise to call the kind of feminism professed by the UN and nations agreeable to it a new religion that imposes its dogmas in the name of the higher good of women’s rights … as in contraception and family planning, the international furthering of which France has committed to fund to the tune of $100 million.

Guterres encouraged women to act, including through compulsory “parity” that sets a fixed proportion of women in responsible positions. This “redistribution of power” would be an answer to his opening remark: “Power is very rarely given, it is taken.”

Another revealing moment was when Fernandez posited himself as a first-class promoter of LGBT rights: “People are discriminated against because of their sexual orientation or gender. One of the first decisions I made to launch this debate was to create a minister for women and gender. We are promoting sexual and reproductive health by building a new consensus, as in the Argentinian experience of the fight for the legalization of abortion. We are working on a new law so that no woman will need to resort to clandestine abortion. We are also introducing comprehensive sexual education throughout the country. It will be intersectional and intercultural. We will implement effective and universal access to abortion.”

Fernandez was welcomed by Pope Francis in Rome shortly after his election – the abortion law had not yet been adopted – and was allowed to receive Communion together with his concubine.

Among the representatives of civil society was the leader of “All Poland’s women’s strike,” Klementyna Suchanow. To enthusiastic applause, the organizer of pro-abortion rallies in Poland described her struggle for abortion and LGBT “rights,” and the dangers of what she called “religious fundamentalists” (read; “Catholics” in the Polish context). “These fundamentalists are everywhere and they are very well organized, their nerve center is in Poland,” she said.

Also invited to the event was a foursome of comedians, a journalist and a female rabbi. Sophie Aram, who has a regular feature on publicly funded radio France Inter, where she has repeatedly insulted Catholics by ridiculing their beliefs, contributed this line: “Everything will be OK as long as we can laugh about it and as long as we can get an abortion … Sorry, I was asked to keep this short.”

On the first day of the Generation Equality Forum, many commitments were made to further its agenda. An ISO norm will be developed to assess male-female equality. Two major French companies, Pinault and Accor, promised to finance a “women’s home”; Angela Merkel boosted Germany’s contribution to a “Coalition for justice and economic rights from 100 million to 240 million euro, and the Bill & Melinda Gates have pledged to spend 2.1 billion dollars in favor of “gender equality.”

On a bigger scale, one of Macron’s numerous tweets about the Forum announced “40 billion dollars of new funding so that, everywhere in the world, women have access to contraceptives, safe and legal abortion, new technologies, and to support women victims of sexual violence in times of conflict.”