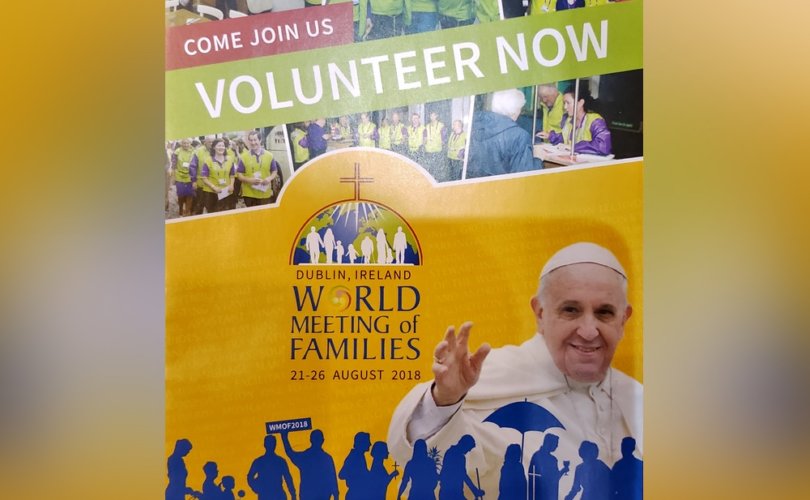 DUBLIN, Ireland, May 29, 2018 (LifeSiteNews) – The Vatican’s upcoming international meeting for families is throwing the door wide open in a bid for “diversity” among volunteers for the event, specifically soliciting volunteers from varied “communities and backgrounds” to participate. Critics say the invitation is a gesture towards the LGBT movement.

“We want volunteers from all walks of life from across the island of Ireland,” the WMOF volunteer brochure states. “We value and embrace diversity and seek volunteers from a range of communities and backgrounds.”

It then adds in addendum, “We only ask that our volunteers are sensitive and respectful of our Catholic ethos.”

The invitation raises more red flags on the event and underscores the purpose behind an alternative orthodox Catholic event supporting the family.

Lepanto Institute President Michael Hichborn pointed out that the term “diversity” is recognized for use in pushing LGBT issues, and also noted that if the goal were to simply be open to all, organizers could have just said volunteers need not be Catholic.

“The language in this brochure about “valuing and embracing diversity” is deeply concerning,” Hichborn told LifeSiteNews. “ If the intention of this brochure was simply to cast a wide net to draw in as many volunteers as possible, then it would have sufficed to say that one does not need to be a Catholic in order to volunteer.”

“But the issue of ‘diversity’ strongly implies sexual perversity as the LGBT lobby has long used this term in seeking acceptance within the Catholic Church,” he added. “ Given the use of homosexual images in previous WMOF-Ireland literature, it is reasonable to conclude that the term “diversity” implies the same in this brochure for volunteers.”

The language in the WMOF volunteer pamphlet is keeping Catholic concern about the event at the forefront. This is because the gathering scheduled for later this year in Dublin has already had decidedly gay-affirming promotional material, and there are Irish officials who would like to see it be a vehicle for “celebrating” LGBT families.

LifeSiteNews did not hear back from the World Meeting of Families on an inquiry into whether the volunteer program is open to individuals living in open conflict with the Church’s teaching on marriage, family, and sexuality.

Director for the Lumen Fidei Institute Anthony Murphy told LifeSiteNews the volunteer brochure’s language is indicative of the problematic approach the event’s leaders are taking.

“The leaflet is typical of the approach chosen by the leadership of WMOF,” he said. “Sadly they do not appear to take the Catholic faith seriously and are happy to present it as an option rather than a necessity for the salvation of mankind.”

“The organizers of the event are clearly terrified of explaining why the Church teaches what She does lest they are labeled “homophobic” and so they opt for this confusing and neutral language,” Murphy said. “They are not so much concerned with the message of the Gospel but simply want to be seen as inclusive and popular and so they diminish our faith and present it as one of a number of options all the while using confusing and misleading phrases to try and pretend the Church has changed its moral teaching.”

This tack is damaging to the faithful in body and soul, he said, especially young people.

“The first casualty of any war is the truth, and the crisis facing the Church in Ireland is no different,” said Murphy. “We are living in an increasingly secular society where God’s law is under threat every day. The consequence of misleading propaganda being repeated time and time again only serves to corrupt hearts and minds especially the youth.”

He added, “Sadly some of that misleading propaganda now comes from within the Church itself with the apparent blessing and approval of the highest authorities in the Irish Church.”

The 2018 World Meeting of Families is set for August 21-26 in Dublin. The Vatican’s Dicastery for Laity, Family and Life, headed by Cardinal Kevin Farrell, convenes the gathering.

It is described on the event website as “a major international event” that “brings together families from across the world to celebrate, pray and reflect upon the central importance of marriage and the family as the cornerstone of our lives, of society, and of the Church.”

The WMOF is being preceded by a months-long “period of catechesis/faith education, which has been prepared by the Church in Ireland for use by local parishes and across the world,” according to its website. Pope Francis is expected to attend.

This year’s theme is, “The Gospel of the Family: Joy for the World,” and the event draws from Pope Francis’ controversial exhortation Amoris Laetitia for its material.

Amoris Laetitia continues to cause division in the Church due to its problematic sections giving tacit approval for Holy Communion for civilly-divorced-and-remarried Catholics, same-sex couples, and others living in non-marital situations.

Concerns over the WMOF were amplified last fall when it came to light that program material for the “catechesis and faith education” period in the run-up to the event explicitly portrayed homosexual couples as an appropriate form of the Christian family.

The material had a photograph showing a lesbian couple in an embrace within the section of the material titled, “The Christian Vision for the Family.”

Just above the image of the lesbian couple the material had also made a statement of seeming approval of “other unions” besides that of man and woman ordered by God and the Church.

“While the Church upholds the ideal of marriage as a permanent commitment between a man and a woman, other unions exist which provide mutual support to the couple. Pope Francis encourages us never to exclude but to accompany these couples also, with love, care and support.”

The Irish bishops subsequently reissued the booklet minus the promotion of same-sex relationships after people expressed concerns. The WMOF promo material has contained other homosexual affirming elements as well.

A video released by the Irish bishops earlier this year to prepare families for the event has an interview with an LGBT activist who said she’s “upset” with Catholic teaching on homosexuality. The video also contains an interview with a woman who says that the fact that she’s “gay” has “never been a huge problem in my family.”

After the pamphlet was reissued without the homosexual material, Dublin Archbishop Diarmuid Martin, who is overseeing the WMOF, said nonetheless that the event would be “an inclusive event, open to all families and family members.”

An Irish government official warned the country’s Catholic Church earlier this year that homosexual partners should be “celebrated and not excluded” from the upcoming WMOF.

“LGBTI families, like all families, should be celebrated and not excluded,” Zappone stated. “That’s the message that should be coming not just from the World Meeting of Families, but from all who believe in justice, equality and fairness.”

The ongoing attack on the family in society, along with the concerns about the WMOF’s seeming undercurrent of homosexual design have prompted the Lumen Fidei Institute to convene an alternate conference for families.

The Irish lay group of Catholics will host “A Conference of Catholic Families,” August 22-23 in Dublin concurrent to the WMOF.

“A Conference of Catholic Families,” will use Pope Pius XI’s encyclical Casti connubii, “of chaste wedlock,” for its starting point.

The alternate conference on the family will call upon attendees “to rise up and defend traditional Catholic marriage and family life.”

“The long suffering faithful in Ireland urgently need the reality of a courageous and fearless proclamation of the Gospel as the only solution to problems currently facing the modern family,” Murphy told LifesiteNews, explaining the need for the concurrent event for families.

Lumen Fidei has produced a video to communicate just how serious the targeting of marriage and family is today. The video can be accessed by clicking HERE.

“Lumen Fidei Institute will host “A Conference of Catholic Families” during the week of WMOF because we know the most effective way lay Catholics can support the Pope is to promote the teaching of the Church in a clear and faithful manner,” Murphy said. “Our conference will do just that.”
“A Conference of Catholic Families,” will take place at the Ballsbridge Hotel, Dublin, Ireland, from Wednesday and Thursday, August 22-23.

Tickets are 35 euros for both days, and 20 euros for each individual day. They can be purchased at the Lumen Fidei website HERE.