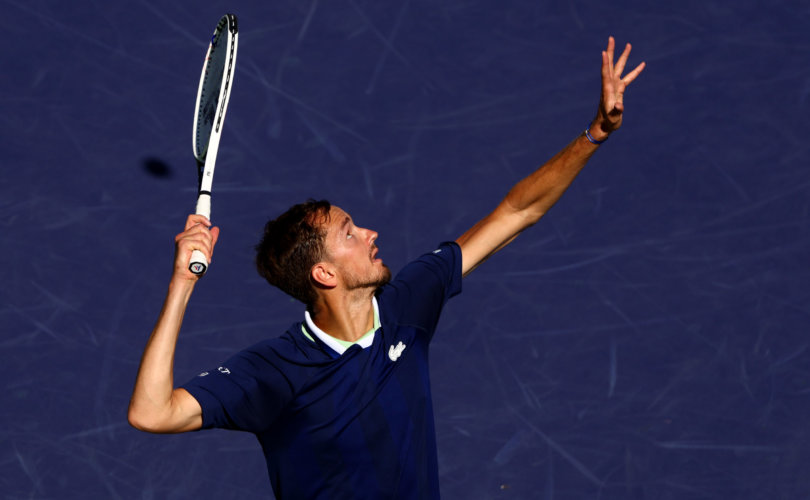 The U.K.’s Sports Minister Nigel Huddleston, when addressing a parliamentary select committee on March 15, said in the light of Putin’s invasion of Ukraine that a number of countries “have agreed that they will not allow representatives from Russia to compete. There are also visa issues as well.”

“When it comes to individuals, that is more complex,” he added.

Huddleston, 51, declared that he would be uncomfortable with a “Russian athlete flying the Russian flag,” adding “absolutely nobody flying the flag for Russia should be allowed or enabled.”

The sports minister ruled out certain athletes competing as “non-aligned,” saying that further proof of their disavowment of Putin would be needed in order to play the prestigious tournament.

“We need some potential assurance that they are not supporters of Putin and we are considering what requirements we may need to try and get some assurances along those lines,” he stated.

The minister expressed a need for “some broad global consensus on this.”

As part of the continued fallout on the Russian population following Putin’s invasion, Medvedev could now be banned from participating in the tournament, even though he is the current top-raking player.

Medvedev, who ascended to number 1 after Novak Djokovic was refused admission to the Australian Open due to being unvaccinated, had removed his native Russian flag from social media following the invasion.

He has also called for peace in light of the conflict: “My message is always the same — I want peace in all of the world.”

Any potential ban by the U.K. would go against the official position of the global tennis community, however. Steve Simon, head of the Women’s Tennis Association (WTA), explicitly opposes players being penalized for the “decisions of an authoritarian leadership.”

“I can tell you that we have never banned athletes from participating on our tour as the result of political positions their leadership may take,” he told the BBC recently. “So it would take something very significant for that to change, but again we don’t know where this is going.”

The potential banning of the Russian star has been met with consternation by many online, with commentators across the board criticizing the move. “First they went after @DjokerNole for refusing a vaccine now they go after Danlil Medvedev for being Russian,” wrote political commentator, Kim Iversen.

First they went after @DjokerNole for refusing a vaccine now they go after Danlil Medvedev for being Russian. https://t.co/eivCe1zjhk

This is repellent. Medvedev might have an opinion. He might have no opinion. He might live in the Seychelles for tax purposes for all I know. But demanding that he have the correct political perspective in order to play, is repulsive. A truly slippery slope. https://t.co/4HeHO7aPBP

What are the rules with tennis now. I can’t keep up. Can’t be unvaxxed and can’t be Russian. https://t.co/HgljNUltR4