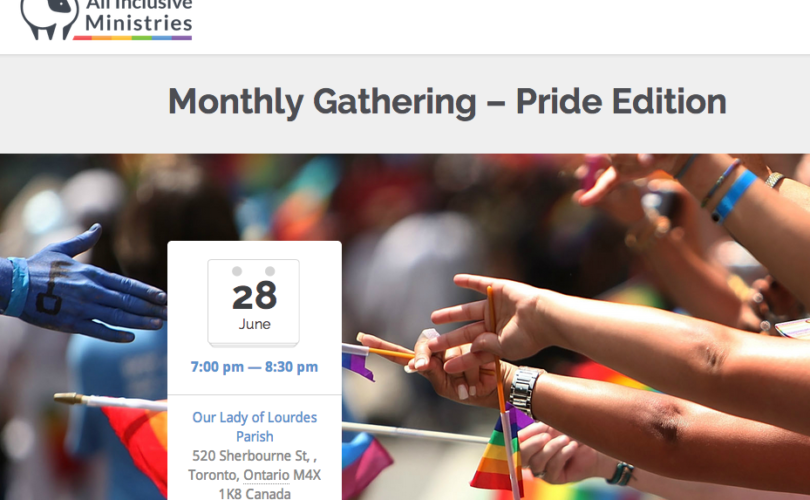 A screenshot of All Inclusive Ministries' original announcement for its June monthly Mass.

TORONTO — As Toronto Cardinal Thomas Collins makes headlines for his opposition to the Ontario English Catholic Teachers Association’s (OECTA) participation in his city’s WorldPride event June 29, a downtown Toronto Catholic church will be hosting a Mass the evening before the parade that some supporters have dubbed a “WorldPride Eucharistic Celebration.”

On June 28, All Inclusive Ministries (AIM) at Our Lady of Lourdes Parish will be hosting a “special edition” of its monthly Mass. The group’s website states that it aims to support “lesbians, gays, and other groups that have been historically marginalized for sexual reasons.”

AIM’s website initially advertised the Mass as a “Pride edition” of its monthly gathering. According to the original announcement, “WorldPride 2014 Toronto (WP14TO), presented by Pride Toronto, is shaping up to be a big event. All Inclusive Ministries will bring its message of faith and love to this celebration.”

However, the announcement was revised to omit references to the Pride parade after LifeSiteNews contacted the Archdiocese of Toronto and Our Lady of Lourdes pastor Father John Sullivan, SJ. The event is now called “Monthly Gathering – June Edition.”

All Inclusive Ministries was founded in 2012 with the Archdiocese of Toronto’s backing. Both the archdiocese and AIM’s founder, Jesuit Father Gilles Mongeau, told LifeSiteNews that the intention for the group is to offer pastoral care in keeping with Catholic teaching.

The parish previously hosted the local chapter of Dignity, a US-based group that aims to change Church teaching on homosexuality, and Mongeau said that AIM is still in a process of “evolv[ing]” towards fully reflecting Church teaching.

Father Sullivan told LifeSiteNews that AIM had originally proposed to attend the WorldPride parade and host an information booth as a Catholic group, but when the idea was taken to the archdiocese’s episcopal board, which is comprised of Cardinal Collins and the archdiocese’s auxiliary bishops, it was rejected.

The bishops “felt that the presence of AIM at the Pride activities was not the best idea. And so they did not grant permission for that,” Sullivan said.

In a statement provided to LifeSiteNews, the Archdiocese of Toronto said the city’s bishops “recommended that the presence of a booth at the World Pride parade would not be the appropriate venue to promote the legitimate desire of AIM to witness to the Church’s pastoral care for individuals with same-sex attraction.”

According to Sullivan, the bishops did say the group could go ahead with its Mass on June 28.

“The bishops thought that they could advertise this Mass for those who felt that there was no home in the Catholic Church for them, that there was this Mass going on and they are most welcome to attend,” he explained.

The priest said that the Mass was not intended as a “Pride edition,” as originally advertised, but something that “just happens to coincide” with the group’s normally scheduled monthly Mass. He called the group’s original online announcement “somewhat inaccurate.”

Sullivan said that while AIM will not be publicly participating in any Pride activities as an identifiable group, some members might be attending the events as individuals.

The “special edition” Mass has drawn interest from St. Joseph’s Church in Ottawa. The parish announced in its June 1 bulletin that they will send a delegation to the WorldPride event, and invited parishioners to join in the AIM Mass, calling it a “WorldPride Eucharistic Celebration.” St. Joseph’s Church has marched in Ottawa’s Pride parade for many years.

Adam told LifeSiteNews that parishioners will be marching in the Toronto Pride parade to show that “all are welcome in the Church.”

“In terms of their participation in this event, that’s really at the center of it, to show that we are reaching out and we want to be seen as a parish that welcomes all of humanity,” he explained.

When LifeSiteNews.com asked if a Catholic group marching in the Pride parade might be seen as an endorsement of homosexuality, Adams responded: “I think that the main message in all the group’s activities, and in our activities as a parish as well, is that we aim to be inclusive.”

Cardinal Collins has been strongly critical of the Pride parade in recent months in the wake of OECTA’s decision to participate. The cardinal told the National Post last week that the Pride parade “seems to be going completely against what we believe in many ways.”

Regarding OECTA’s participation, he said, “That’s the point at which I would say, ‘Really? What are you thinking?’”

The Pride parades are known for including mock sex acts, nudity, and sadomasochist costumes.

Toronto Catholics told LifeSiteNews that Our Lady of Lourdes Parish, which has been run by the Jesuits since 1969, has been known for decades as a hub for Catholics who oppose Church teaching on homosexuality.

Dignity first came to Toronto in 1974, and held meetings at Our Lady of Lourdes from its early years. According to a 1990 article in The Interim, Dignity Canada’s statement of purpose at the time said the group believes “gay men and lesbian women can express their sexuality in a manner that is consonant with Christ’s teaching.”

The Interim also reported remarks made by ex-Jesuit John McNeill at a 1988 Dignity meeting in Toronto. “Gay sexual love is a [sic] holy, and must therefore be accepted by the Catholic Church,” he said.

In 2012, with the backing of Cardinal Collins, the parish launched All Inclusive Ministries. Dignity Toronto now meets instead at the 519 Church Street Community Centre.

According to Mongeau, AIM’s founder and a professor of theology at the Jesuit-run Regis College in Toronto, the group was established to offer the “pastoral care of the Church to gay and lesbian Catholics, through the celebration of the sacraments and through spiritual and catechetical formation, and through the outreach of its members to the Church and the wider community.”

When asked if AIM upholds the teaching in the Catechism of the Catholic Church that homosexual acts are contrary to God’s plan for sexuality and the homosexual inclination itself is “objectively disordered,” Mongeau responded “yes” to both questions.

In its statement to LifeSiteNews, the archdiocese said Toronto’s bishops have “endorsed efforts by All Inclusive Ministries (AIM) to celebrate their regular monthly Mass at Our Lady of Lourdes Parish, as part of its ongoing ministry.”

“Our understanding and expectation is that the group assists men and women who are seeking to live out their faith, formed in the Church’s moral teaching,” the archdiocese said.

However, LifeSiteNews found examples of numerous activities carried out by AIM that call into question its adherence to Catholic moral teaching.

In February, AIM hosted James Loney to speak about the “role of faith in his life.” Loney is known for opposing Church teaching on homosexuality and is open about living with his male partner.

AIM has posted various articles to its Facebook page from queeringthechurch.com with titles such as “German Bishops Agree: Sexual Doctrines Must Change!”

In one queeringthechurch.com article posted to AIM's Facebook page titled “An Exciting Time to be Gay and Catholic?” the author describes same-sex orientation as “an entirely natural … part of the human condition.”

Mongeau responded to questions about these problematic aspects of AIM’s work by indicating that AIM is a work in progress. “As All Inclusive Ministries evolves, we are working together with the parish and the archdiocese to ensure our events, public discussion and any other activities are in concert with our overall mission and church teaching,” he said.