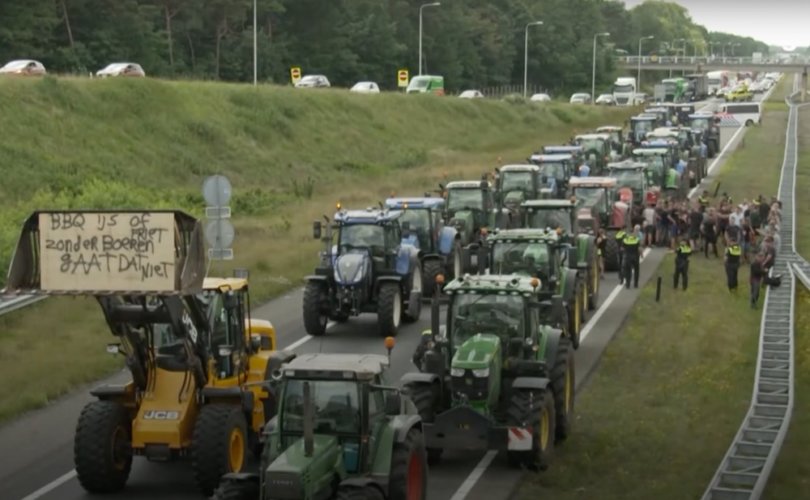 (LifeSiteNews) —In the ongoing Dutch so-called “nitrogen” crisis being used by the government to reduce the number of farmers and especially livestock farms in the Netherlands, added pressure has been put on those who not only live off the land, but who also help to feed the country’s millions and the world’s billions. At the end of last month, the government made clear that those who are unwilling to comply with increasingly stringent environmental standards will be allowed to sell their farms and farmland to the administration at 120 percent of their value, on a voluntary basis.

Thousands of farmers are under threat since a court ruling elicited by environmentalist groups led the government to impose harsh measures not only on the agricultural sector but on construction and large industries.

The court ruling in 2019 knocked down a 2015 scheme by which farmers were allowed to emit a declared amount of nitrogen and continue their activity in view of programmed actions to protect and restore nature. The so-called “PAS” was cancelled by the Council of State, leaving both farmers and builders in the lurch while simultaneously, planned emission reductions were set higher and higher.

News of the offer to buy out up to 3,000 farmers was met by renewed protests in the north of the Netherlands last week, when hundreds of farmers converged to Zwolle with their tractors to demonstrate against penalties levied on “PAS” farmers whose nitrogen emissions have been deemed illegal.

RELATED: How Dutch protests ignited a global backlash to the ‘green’ war on farmers

Offers are expected to be made to farmers by April of next year. The government decision has marked the close of a period of uncertainty – but not of discontent – for Dutch farmers who have repeatedly demonstrated for the safeguard of their livelihoods throughout the country,

Those who will refuse government offers have been warned that this is the best offer they can expect. Following debates in the Lower Chamber the government made clear last week that if “peak polluters” whose land is close to protected EU “Natura 2000” zones have not cut down their nitrogen emissions, relocated, or sold out by the autumn of 2023, their land will be forcibly expropriated. This is the first time that the Dutch Cabinet has admitted that forced buyouts are on the table.

RELATED: Dutch farmer protests demonstrate ‘green’ utopianism is a war against our way of life

— Article continues below Petition —
URGENT: Say No to the UK introducing a “right” to abortion
Show Petition Text
10639 have signed the petition.
Let's get to 12500!
Thank you for signing this petition!
Add your signature:
Show Petition Text

The special “nitrogen” minister, Christianne van de Wal, who is in charge of dismantling one of the Netherland’s thriving sectors, told the Dutch Parliament that “for agricultural entrepreneurs, there will be a stopping scheme that will be as attractive as possible.” To date, some 700 “polluting” farmers have approached provincial authorities saying they want to sell out, but many retracted once the national guidelines were made public.

Taxpayer money will be used either way to reduce the number of farmers by some 3,000, according to major news sources, another objective being to halve the number of livestock by 2030, the deadline for halving nitrogen emissions. These numbers were first revealed by the official mediator between the Cabinet and the farmers’ representatives, Johan Remkes, on October 5. His report stated that between five and six hundred “peak polluting” cattle farms situated near protected areas must stop by the end of 2023.

The Dutch agriculture minister Piet Adema was unwilling to go into detail about the buying out of Dutch farmers, many of whom work on land owned by their family for generations. In an interview by wnl.tv on December 1, Adema refused to say whether it is true that government plans aim for a 30 percent reduction in farms. However, he acknowledged that in order to reach European Union environment goals, “the agricultural sector will need to join. And that will lead to fewer farmers, and it will also lead to less cattle.”

He added that hundreds of farmers in their sixties are going to stop naturally because they have failed to find successors.

In turn, it will lead to less food, fewer dairy products, and a reduction in production of agricultural goods, of which the tiny Netherlands is one of the world’s top exporters. While the farmers are pushed out of business – because it seems clear that no one is expecting or even hoping that they will all opt for “approved” environment-friendly ways of farming – humanity at large will be confronted by increasing food shortages.

What is nitrogen anyway? It’s a major component of the air we breathe, and it is totally harmless as such. It is emitted by livestock and fertilizers (which are especially in the crosshairs of the environmentalists), but also by industry, construction, and vehicle exhausts. When it binds with oxygen molecules and falls to the ground, it does become harmful for nature or at least for some forms of nature such as prairies by changing the soil’s chemistry. But there are plants that can capture it, and processes that can reduce emissions.

These are not the primary solutions sought for by the “sustainable development” crowd: they are intent on “protecting” nature at the expense of man.

Even this objective is not as clear-cut as it seems. In mid-November, a scandal broke out in the Netherlands when it appeared that the “Rijkswaterstaat,” the Directorate general for public works, was buying out farmers in order to use their nitrogen emission permits in order to build or enlarge motor highways. For instance, six cattle holders sold their farms to allow the enlargement of the ring road around Utrecht.

Buying nitrogen permits has become the only way for construction works to go ahead since the 2019 court ruling. And interestingly, the anti-farmer rules are being brandished by the Dutch authorities as a prerequisite for the building of new homes and industries – not only through the use of nitrogen permits, but because large sections of land will be made free by the closing down of agricultural land.

Among the buyers are the two Dutch airports, Schiphol and the future Lelystad, which are both in the process of buying up farmland. Schiphol is not compliant with nitrogen quotas and simply needs the permits to go on functioning. while Lelystad is faced with erroneous calculations by the Dutch government that had minimized the nitrogen permit it will need to function.

It looks as if the farm war is a very one-sided one, as mainly public institutions such as the aforementioned airports and road construction works will encroach on “nature” much more than farmers do.

The farmers, in turn, are angry because for decades, they have followed government advice and plans and EU regulations that have turned many of their kind into a sort of agricultural public servant, choosing intensive farming with the encouragement of the authorities and making costly changes to their farms in order to meet “ecological” requirements.

The environmentalists, for their part, have already warned that what the farmers are facing today is just a foretaste of the rules we will all have to go by in the future. Two university professors from Wageningen chose the traditional feast of Saint Nicholas in the Netherlands, on December 6th, to publish a manifesto based on the anti-growth groups such as the infamous Club of Rome report in 1972.

They made clear that “sustainability” means putting an end to measuring growth through the Gross National Product, subsidizing fossil energies, reducing consumption, and even setting up both minimum and maximum incomes.

Or to put it more clearly: setting up socialism where the state rules and regulates everything.