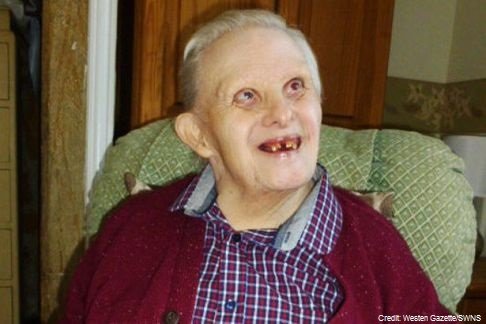 Kenny recently celebrated his 76th birthday at a care home in Somerset with loved ones.

Born in 1940, he's described by staff at Wisteria House care home, near Yeovil, Somerset, as a 'true gent' and an 'absolute darling' who 'loves being with people'.

But it could have all been very different, as Kenny was so nearly just another tragic statistic.

He was left for dead at birth by doctors who thought he was stillborn.

When Kenny was born during the Second World War, his mother Iris was unaware she was having twins – only realising when Kenny's sister Dorothy was born moments later. Hospital staff initially thought Kenny was a stillborn and set him aside, focusing on the birth of his sister.

But as Kenny began to show signs of life he was resuscitated by doctors.

At the time Kenny was born, the average life expectancy for people with Down's was just 12 years. Yet remarkably, he recently celebrated his 76th birthday.

“Kenny is an absolute joy to be with”

“To some this may not be a landmark age, however, for Kenny this is another milestone.

“Kenny is an absolute joy to be with every day. He's smiling most of the day; before he goes to bed and when he wakes up he's smiling.

“He is a true gentleman and a gentle man. He loves affection and his food.”

Kenny's long life, and the joy he gives to all those who he meets, are a stark contrast to the eugenic abortion policy operating in the UK.

Under the 1967 Abortion Act, abortion is legal all the way up to birth for unborn children with a disability – leading to the routine killing of children with conditions like spina bifida, cleft palate, club foot and Down's Syndrome.

More than nine in ten of all unborn children diagnosed with Down's Syndrome are aborted – 92%. If Kenny had been deliberately left to die at birth, how would that have been any different?

Instead, Kenny Cridge has lived a long and happy life – and one which has brought happiness and fulfilment to everyone who knows him.

Reprinted with permission from Society for the Protection of the Unborn.