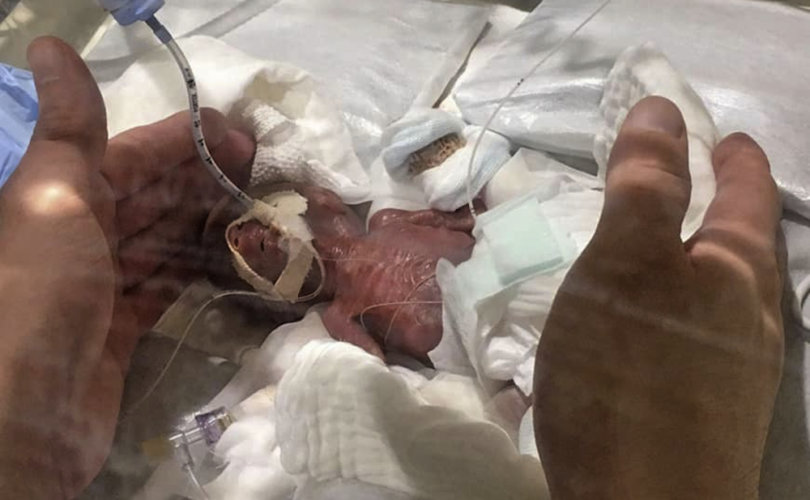 TOKYO, February 28, 2019 (LifeSiteNews) — Setting a world record, a baby boy who weighed just under 10 ounces (268 grams) at birth was released from a hospital in Japan.

Delivered last August in Tokyo at just 24 weeks’ gestation, a diagnosis had showed he had stopped growing within his mother’s womb. Doctors then delivered him via Caesarean section when they determined that his life was in danger. He is now feeding and growing normally and has been discharged from Keio University Hospital, just two months after his initial due date.

After five months of intensive care, the baby boy now weighs a little more than 7 pounds (3,238 grams). According to local media, his mother said, “I can only say I'm happy that he has grown this big because honestly, I wasn't sure he could survive.”

The baby boy was so small at birth that he fit in a pair of adult cupped hands. Dr. Takeshi Arimitsu, who treated the patient, said “there is a possibility that babies will be able to leave the hospital in good health even though they are born small.” Babies with a birth weight below 35 ounces (1,000 grams) are prone to have lung problems, suffer heart failure, or contract severe infectious diseases due to their underdeveloped organs. In developed countries such as Japan, the survival rate of these babies has been as high as 90 percent recently.

By managing his nutrition and breathing, doctors treated him in a neonatal intensive care unit at the hospital, where he grew steadily and was breastfed. He was released last Wednesday.

According to Keio University Hospital, he is believed to hold the record for the smallest newborn boy to be discharged from a hospital in good health. The previous record was held by a baby boy born in Germany in 2009 weighing just 9.6 ounces (274 grams), the hospital said. Doctors cited a registry of the world smallest surviving babies that is maintained by the University of Iowa.

According to the Tiniest Babies Registry, there have been 23 babies born worldwide who survived after premature birth and weighing less than 10.5 ounces (300 grams). Of these, only four were boys. The smallest girl, also in Germany, weighed 8.8 ounces (252 grams) at birth.

Keio University Hospital said the survival rate for the smallest babies is lower for boys than for girls. While they are not certain why this is the case, it may be related to the slower development of lungs in unborn boys, said Keio Hospital. According to UNICEF, Japan has one of the world's lowest rates of infant mortality.

“I want people to know that babies can return home vigorous even if they are born small,” said attending Dr. Takeshi Arimitsu.

The incidence of babies aborted at the gestational age of the boy in Japan remains high.  A 2007 study published in the British Journal of Obstetrics and Gynecology, for example, showed that approximately 1 in 30 abortions after 16 weeks’ gestation result in a live infant. At 23 weeks’ gestation, 9.7 percent survived. The study thus suggested that more than 900 babies survive late-term abortions each year in the United States.