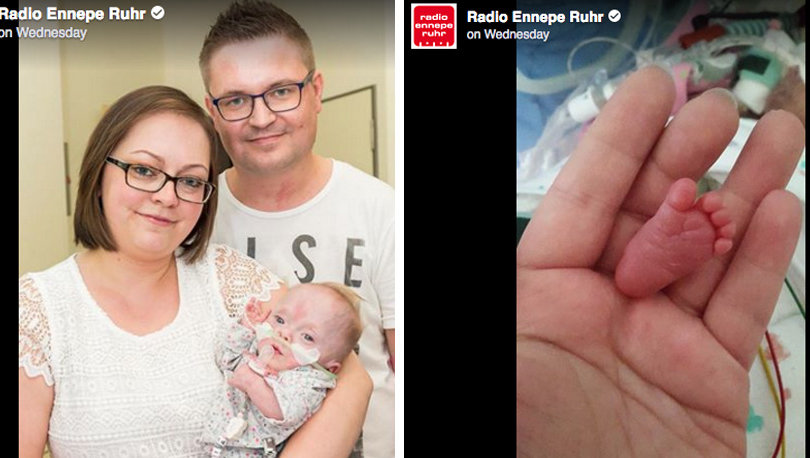 Baby Emilia was born at 26 weeks, weighing a mere 8 ounces.

September 15, 2016 (LiveActionNews) — Nine months ago in the German city of Witten, baby Emilia Grabarczyk was delivered prematurely in the 26th week of pregnancy via Caesarian section. Her entire foot was the size of a thumbnail and she reportedly weighed no more than a bell pepper.

Doctors feared that without an early delivery, Emilia would have died, as the placenta was not sufficient for her nutrition. Weighing in at just 8 ounces and only 8.6 inches long, Emilia has been called the smallest surviving baby in the world.

Dr. Bahman Gharavi, Head of Children and Youth Clinic at the hospital, explained just how amazing Emilia’s survival is.

“Even children with a birth weight of 14 ounces rarely survive,” he said. After thanking the team of medical experts who cared for Emilia, Gharavi continued, “We have to thank Emilia as well for her own survival. She is a little fighter. For more than six months, it was unclear whether she would survive. Only in recent weeks she is getting more robust.”

According to The Mirror, Emilia now weighs 106 ounces (a little over six-and-a-half pounds), and shows no signs of serious disability. But making it through the first few months of her existence outside the womb was no easy thing. She was initially fed through a tube, and doctors used cotton soaked in sugar water to calm her and soothe her pain. The Mirror reports that when baby Emilia weighed just 12 ounces, she underwent abdominal surgery – and survived.

Despite overwhelming odds against Emilia’s survival – and “increased risk of hyperactivity and learning difficulties” should she survive – giving up was never an option for her parents, Sabine and Lukas.

“There were many difficult days and many tears, but she clearly wanted to survive,” said Sabine.

The previous record for smallest surviving baby was reportedly held by Rumaisa Rahman, born in Chicago in 2004, weighing 8.6 ounces.