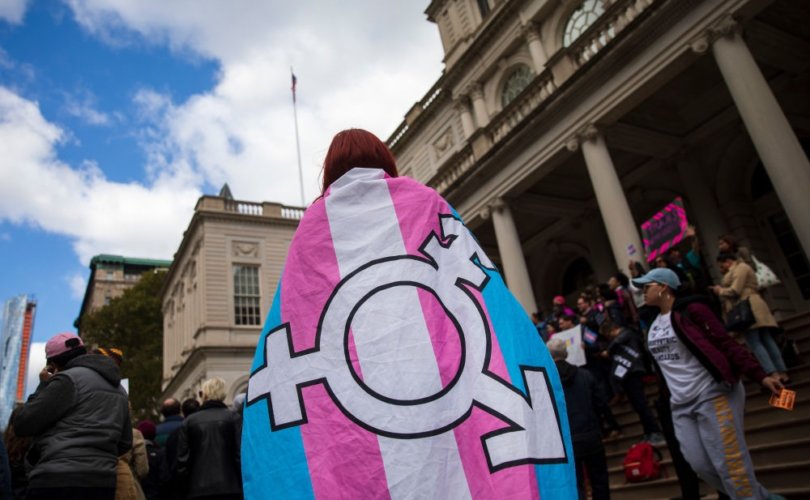 CHICAGO (LifeSiteNews) — The “non-binary” guardians of a young boy, who has been publicly paraded as a child drag queen, reportedly said they plan to put him on puberty blockers and begin transgender surgeries when he turns 16.

The story has elicited strong backlash on social media, with opponents arguing the child’s mother and her “spouse” are engaging in child abuse.

Noella McMaher has been promoted by LGBT ideologues as the world’s “youngest transgender model,” the Daily Wire reported. The 10-year-old boy has been raised as a girl since he was a toddler and underwent a legal name change at age seven.

Last week, the boy made headlines for walking the New York Fashion Week runway dressed as a girl and representing the Trans* Clothing Company brand.

Noella currently lives with his mother Dee and her “spouse” Ray, both of whom are women who identify as transgender. The two women also have Noella’s brother (who they are raising as a boy) in their custody, as well as a baby referred to as a “theybie.” Both work professionally in left-wing activism.

On Monday, REDUXX pointed out that the 10-year-old’s mother and fellow transgender “spouse” affirmed several years ago they would put Noella on puberty-blocking drugs and hormones. They would also reportedly start him on transgender surgeries at age 16.

The “world’s youngest transgender model,” 10-year-old Noella McMaher, comes from a predominantly transgender household and is the child of a professional trans activist.

McMaher allegedly came out at age 2, and is set to have “gender surgeries” at 16.https://t.co/IU2htFzaa4

RELATED: Mother claims son communicated being ‘transgender’ at ‘the earliest moment’ he ‘had words’

According to the 2019 article published in Chicago Parent, the boy’s mother said he started saying he was really a girl at age two, and was “socially transitioned” at age four.

The outlet stated that Dee was “looking forward to watching” the then-seven-year-old child “grow and turn into the person she [sic] is and was meant to be.”

“In the next few years, she [sic] will start puberty blockers and hormones, and begin the physical transition process with gender surgeries at 16,” the article stated, after briefly noting that Noella’s mother had “worked as an independent child and family advocate, working with transitioning children” even before her son was born.

It’s unclear whether Noella has already started taking hormones and puberty-blocking drugs in the three years since the Chicago Parent article was published.

The Daily Wire pointed out that although it’s unclear what sort of surgeries are planned for the child, “[m]ale-to-female transgender procedures typically include so-called ‘top’ and and ‘bottom’ surgeries'” that permanently destroy and disfigure healthy body parts.

RELATED: The horrors of transgender surgeries and the lives they ruin are finally being spoken about

Conservatives have blasted the boy’s guardians, accusing them of engaging in child abuse.

Daily Wire podcaster and author Matt Walsh argued that Noella’s mother doesn’t see him as “a child at all, but a political and ideological cudgel to be wielded.”

“He’s a mascot to be paraded around,” Walsh said. “He’s an accessory, a fashion statement. He’s also a thing to be experimented on.”

Meanwhile, though Noella’s mother has promoted him as “a tiny professional” who “was so excited to go down the catwalk” and “knows exactly how to work a crowd,” reports suggest the 10-year-old’s father disapproved of the decision to raise the child as a girl.

According to a 2019 article published in People’s World, the boy’s father, analytical chemist Timothy McCord, didn’t support the “transitioning” of his son.

After McCord allegedly injured his son while trying to put him in “boy pajamas,” the boy’s mother had him “arrested for alleged child abuse and tried to have him convicted of a hate crime, though she was unsuccessful,” the Daily Wire noted.

McCord said it has been impossible to resume visitation of his children and has since supported the adoption of his son by his ex-wife’s transgender “spouse.”

“I tried to get back in their lives but it ended up too contentious and stressful for everyone,” he told the New York Post. “I was given the opportunity to step back and let Dee’s partner adopt the kids and I did that in the hopes they would not have all the stress this was causing in their lives.”

McCord said he would be available if his children wanted to contact him once they’re older.