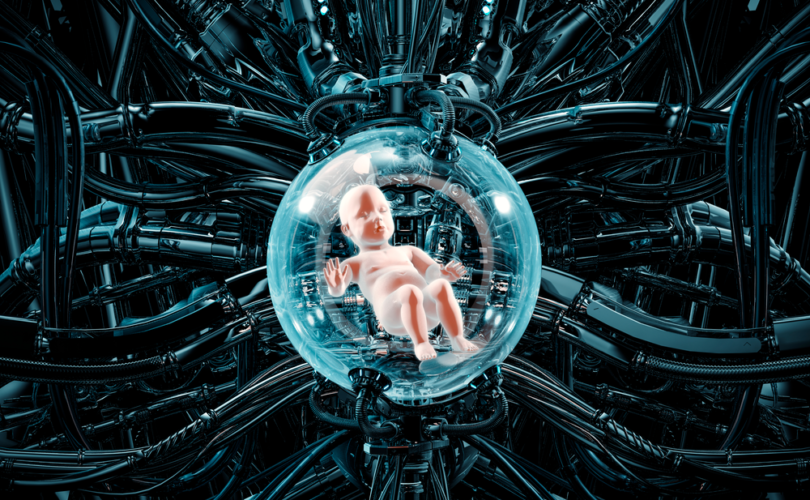 While the AI “nanny” technology is now being used to assist with the care of animal embryos in artificial wombs, the research team spearheading the technology proposed that it could help solve “birth defects and other major reproductive health problems” in humans, according to the South China Morning Post (SCMP).

The AI “nanny” is said to expedite what was formerly a time-consuming and labor-intensive process whereby each embryo in an artificial womb had to be “observed, documented and adjusted manually.”

The “nanny” robot is able to “detect the smallest signs of change on the embryos and fine-tune the carbon dioxide, nutrition and environmental inputs,” shared SCMP, adding that it can also rank embryos by their health and “development potential.”

“When an embryo develops a major defect or dies, the machine would alert a technician to remove it from the womb-like receptacle,” SCMP explained.

The Chinese researchers hailed the ability of the robot to identify and even “learn from” developments that humans wouldn’t notice or be able to address, speculating that this ability could accelerate the use of artificial wombs.

Last year, international guidelines for embryo research were relaxed to allow for experiments on embryos past two weeks, “should broad public support be achieved within a jurisdiction, and if local policies and regulations permit.” In their paper, Sun and his colleagues openly welcomed embryo research at later developmental stages.

Such research would help solve “mysteries about the physiology” of human embryonic development, including about the “origin of life,” as well as help resolve birth defects and reproductive issues, according to the research team.

According to SCMP, there have been “growing discussions” on Chinese internet platforms about artificial wombs and whether they can be used to help reverse China’s rapidly declining population growth rate. According to data released in January, China could now sink below the threshold of growth this year, and its population could begin to shrink.

Such proposals to use artificial wombs to help mitigate or reverse population decline haven’t been limited to Chinese commentators. When Elon Musk tweeted in January that we should be worried about population collapse, Sahil Lavingia replied, “We should be investing in technology that makes having kids much faster/easier/cheaper/more accessible; Synthetic wombs, etc.”

A researcher with the Capital Institute of Pediatrics in Beijing, who wished to remain unnamed, told SCMP that he believes obstacles to the use of artificial womb technology in China would not come from technological issues, but from legal and ethical impediments, such as the legal ban on surrogacy in China.

Some have noted that the use of artificial wombs for human babies in China or elsewhere would raise a variety of ethical implications. For example, pro-abortion Kate Greasley has pointed out that the “my body, my choice” justification for abortion won’t “have much purchase” once woman’s bodies aren’t necessary to gestate a baby, as Anthony McCarthy shared.

McCarthy also pointed out that the Gay Liberation Front’s Manifesto, written in 1971, “captures the importance of reproductive technology in assisting the sexual revolution” by highlighting the ability of artificial wombs to completely undermine gender roles or “shatter the current family model,” as Mary Moore, writing for Gilmore Health News, put it.

“Today, further advances are on the point of making it possible for women to be completely liberated from their biology by means of the development of artificial wombs. Women need no longer be burdened with the production of children at their main task in life,” the Manifesto reads, under the headline “We Can Do It.”

It continues, “The present gender-role system of ‘masculine’ and ‘feminine’ is based on the way that reproduction was originally organized. Men’s freedom from the prolonged physical burden of bearing children gave them a privileged position which was then reinforced by an ideology of male superiority. But technology has now advanced to a stage at which the gender-role system is no longer necessary.”

Former pro-life activist and Florida Catholic writer Anne DiBernardo believes artificial womb technology opens up a “Pandora’s Box,” commenting to LifeSiteNews: “It would further objectify women into mere sex objects. Pregnancy is beautiful and during this time a mother is bonding with her unborn child. How could this ultimately affect babies formed in an artificial womb?”

“This technology opens Pandora’s box and has monstrous implications. What is good for the few is not good for the many,” she added.