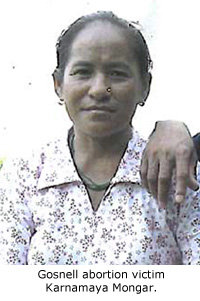 PHILADELPHIA, September 23, 2015 (LifeSiteNews) – Abortionist Kermit Gosnell was convicted of involuntary manslaughter in the drug-overdose killing of a 41-year-old woman, and now her family has won its lawsuit for damages totaling four million dollars.

Gosnell's attorneys did not contest his guilt in civil court, because Gosnell had already been found criminally guilty of the involuntary manslaughter of Mongar under a higher standard of proof.

Even though Gosnell has been found guilty and she has been awarded damages, Gurung will probably not receive any money. Gosnell attorney Jack McMahon has said that Gosnell's medical practice is not insured, and he has few assets, even though in 2011 it was estimated that Gosnell earned $1.8 million a year and owned 20 properties.

Gosnell is in state prison serving three consecutive life sentences after having been found guilty of three counts of first-degree murder in the spinal “snipping” of three babies born alive. The 74-year-old abortionist was also sentenced to two and a half to five-years in prison for Mongar's fatal negligent overdose.

McMahon, who has practiced law for nearly 40 years, commented to the Legal Intelligencer that he agreed with the judge's compensatory damages, but not with awarding punitive damages. The Philadelphia attorney is known for being aggressive and combative, with, as the Philadelphia Weekly reports, “a formidable reputation for flamboyant closing arguments.”

McMahon is no stranger to controversy. Prosecutor David Baughman of the Pennsylvania Attorney General's Office just last Monday in a hearing on an insurance fraud case told Judge Thomas G. Gavin that the AG's Office is seeking McMahon's removal from the case because McMahon is a “potential accomplice” for possibly knowingly submitting false information to AIG as part of an illegal insurance claim.