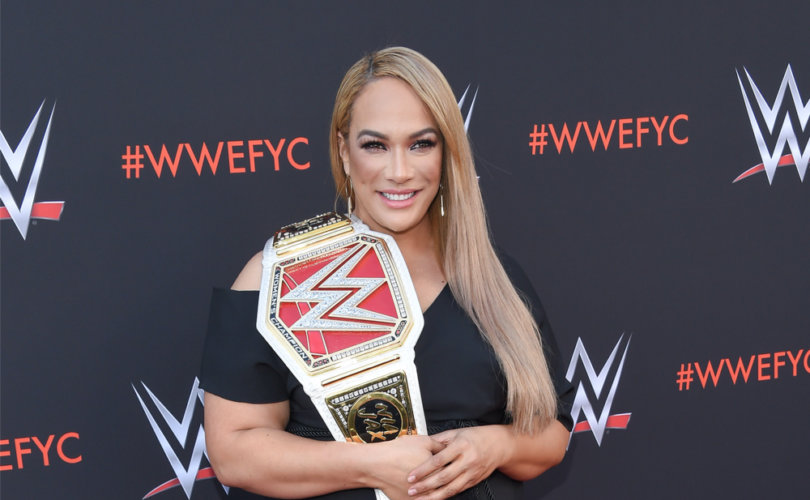 (LifeSiteNews) — A former World Wrestling Entertainment star, the cousin of Dwayne “The Rock” Johnson, confirmed in a recent interview that she was fired for not taking the COVID shots.

WWE fired Nia Jax, whose real name is Lina Fanene, in November 2021, but she revealed for the first time on February 1 what led to her being dismissed

“I stood my ground on certain things that I know they weren’t happy about,” Jax told former WWE commentator Renee Paquette on her podcast.

“Yes, I was choosing not to go and get the vaccine, and it was a personal choice, and I remember sitting down with [WWE Chairman Vince McMahon],” Jax said.

“The whole entire two years I was there, we were tested every day. I never popped positive. I never had COVID the whole time,” she continued.

“I didn’t feel comfortable at times because I had two cousins that have injuries [from the jabs].”

Jax also said her grandma “recently passed from it,” and she “just didn’t feel comfortable.”

She also implied that other WWE employees were dismissed for refusing the jab.

“I just didn’t feel comfortable, and [WWE executives] they made their decision, and that’s totally fine, she said.

“I made the decision for myself, and I stood my ground. I stood by how I felt. I always go by my gut feeling. If it doesn’t feel right in my stomach, I just can’t force myself to do something I don’t feel good with,” she continued.

Controlled by Vince McMahon, the WWE’s  decision to fire Janene for her personal vaccine choices is surprising, given its links to the Republican party. Vince McMahon’s wife Linda McMahon ran for the U.S. Senate twice as a Republican and later served as President Trump’s Administrator of the Small Business Administration.

Other shareholders in WWE include investment giants Vanguard Group, Morgan Stanley, and Blackrock.

Jax has stated that she knows many people in professional sports who have fake vaccination cards.

“I know a lot of people in many professional sports that just paid & got a real card from a doctor,” she wrote on Twitter under her name Lina Fanene in response to a commenter that said she did not understand the safety of the COVID shots.

Hahaha! I stand by that too. Honey, if you really think that all your favorites don’t feel the same as I do, you’re sadly mistaken. I know a lot of people in many professional sports that just paid & got a real card from a doctor..sooooo https://t.co/CG8PC7cQHJ

The safety of the COVID shots remains a concern for many people.

There have been over 850,000 injuries from the jabs reported to the Vaccine Adverse Event Reporting System as of October 2021, including over 8,000 deaths and more than 52,000 serious injuries.

Jax/Fanene, who is 37-years-old, is also not at a significant risk of being hospitalized or dying from coronavirus.

Only .06 percent of all COVID deaths as of February 2 are from women aged 30-39, according to data from the Centers for Disease Control.

Some young women are also concerned about the effect of the jabs on their fertility, as the COVID shots have been shown to affect a woman’s menstrual cycle. A January paper in Obstetrics and Gynecology reported a change in about 1 day for women who previously had regular periods before getting jabbed.