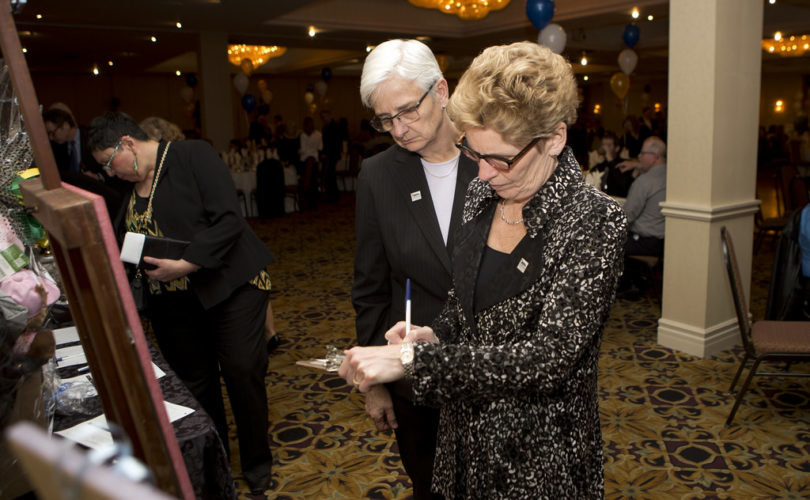 TORONTO, June 26, 2015 (LifeSiteNews) — A staunchly outspoken critic of the Ontario Liberal government’s sex-ed curriculum is not surprised by revelations that Premier Kathleen Wynne and her lesbian “spouse” Jane Rounthwaite strategized on how to depict him as “homophobic” – or that Rounthwaite called him a “Neanderthal.”

“I think it’s unprecedented for something like that to happen, but it doesn’t surprise me. This premier’s taken this to a very personal level,” says MPP Monte McNaughton. “The people who are pushing for this are aggressive, they’re outspoken and they’re intolerant of different points of view.”

McNaughton was referring to the controversial new sex-ed curriculum, which the Wynne Liberals will roll out in September in the province’s publicly-funded schools despite widespread parental outcry and ongoing protests.

The Liberals are “bringing in a curriculum that is obviously against hundreds of thousands of parents’ wishes,” McNaugthon told LifeSiteNews. “I’m standing on the side of parents and asking for increased parental consultations, for parents to have a voice.”

Wynne and Rounthwaite, lesbians who “married” in 2005, are shown gaming out the homophobia smear tactic against McNaughton in a one-hour documentary entitled “Premier: The Unscripted Kathleen Wynne,” commissioned by TVO, Ontario’s publicly funded educational media agency.

TVO ended the commission contract in May, stating among the reasons for its decision that the documentary didn’t meet its journalistic standards, and that director Roxana Spicer resigned before the project was finished.

But the Toronto Star “lifted the veil” on the film June 24 in a lengthy review by Queens Park bureau chief Robert Benzie.

Among the scenes he describes are Wynne and Rounthwaite discussing McNaughton – the sole MPP to challenge the Liberals in the legislature on the sex-ed curriculum, which Education Minister Liz Sandals released on February 23 to media cheerleading.

As Benzie tells it, after McNaughton “alluded to Wynne being a lesbian, the Liberals pounced.”

The comment at issue was when McNaughton pointed out in Question Period that: “It’s not the premier of Ontario’s job — especially Kathleen Wynne — to tell parents what’s age-appropriate for their children.”

Benzie quotes Wynne saying in the film: “We worked it out in the morning. But Jane said: ‘Don’t give him the word. Make him say it.’ ”

Benzie, who describes Wynne and Rounthwaite’s “marriage” as “one of loving, equal partners” and Rounthwaite as a “smart and savvy political operator,” quotes the latter telling the premier, “Let everyone fill in the word. Don’t give him the gift, he doesn’t deserve it. This guy is a Neanderthal and we just won’t help him.”

McNaughton has insisted that he was not singling Wynne out because of her sexuality, but because of the various scandals swirling around her government, and the fact that she broke her promise to properly consult parents on the sex-ed curriculum.

“I can tell you one thing Ontario families don’t want is the premier’s spouse going around and calling people names,” McNaughton told LifeSiteNews. “For a premier of the province of Ontario to attack people who have different points of view at such a personal level is something that we’ve never seen before.”

“I knew the attacks were coming,” said the 38-year-old father of a two-year-old daughter who is serving his second term as MPP, “but what I’ve been strengthened by is the thousands and thousands of people who are writing and calling and emailing and signing petitions and showing up at local rallies” in opposition to the sex-ed curriculum.

McNaughton recalls introducing an 185,000-name petition in the legislature on June 1 that asked for repeal of the sex-ed curriculum, and “a couple weeks ago standing in the pouring rain with hundreds of parents in Waterloo Square. So that keeps me going personally, to stand on the side of the parents. …This is something I believe in and something that I’m going to continue fighting for.”

As for Wynne and her Liberals, “they have to go back to the drawing board and do this right. Stop the name calling, take these concerns seriously like a grown up and solve the concerns that people have.”