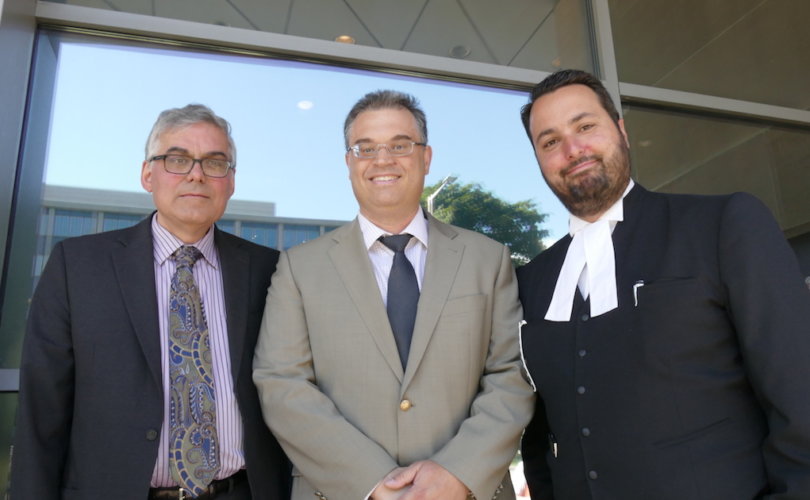 HAMILTON, Ontario, June 24, 2016 (LifeSiteNews) — Nearly four years after filing for a court order to defend his parental rights and Charter right to religious freedom, Hamilton dentist and father of two Steve Tourloukis finally had his day in court.

But he and lawyer Albertos Polizogopoulos found themselves squaring off Thursday against not only the Hamilton-Wentworth District School Board, but the provincial elementary teachers’ union and Ontario’s Liberal government as well.

Tourloukis has asked the Court to declare that as a parent, he has final say over what his children are taught in public school.

He has also asked that the Court find that the HWDSB violated his Charter-protected religious freedom rights by refusing to tell him in advance when and how teachers would be dealing with sensitive topics such as abortion, homosexuality, same-sex “marriage” and sex ed, so he could pull his children out of class if he thought they would be exposed to what would be “false teachings” according to their Greek Orthodox faith.

But in putting Tourloukis’s case before Ontario Superior Court Justice Robert Reid, lawyer Polizogopoulos was pitted against six of his profession on the other side, the majority paid by the public’s dime: two for the board, and two each for the intervenors — the Elementary Teachers’ Federation of Ontario (ETFO) and the Ontario Attorney General’s office.

In what he characterized as a “David and Goliath battle,” Lou Iacobelli, chair of the Parental Rights in Education Defense Fund (PRIEDF), which has funded Tourloukis’ case, pointed out that Liberals’ intervention in the civil matter “makes it clear that they have no intention to respect parental rights and religious freedom when it comes to ‘equity and inclusive education’.”

Those who wish to donate to PRIEDF, go here.

“Parents should be outraged” at the Wynne government’s  “new-found position to undermine parental rights” which is “a total reversal of the longstanding Ministry of Education policy,” noted Iacobelli, a Catholic blogger and retired teacher.

That policy, he added, “has always held that a parent could withdraw their child from any lesson they found objectionable.”

Indeed, as Polizogopoulos argued his case in a sixth floor courtroom, about 40 people gathered on the sidewalk outside, carrying signs stating “Stop violating parental rights Premier Wynne,” and “Parents are primary educators. Don’t you know that Kathleen?”

Father’s request made six years ago

The case dates back to Tourloukis’ September 2010 request — when his daughter was in junior kindergarten and his son in Grade 2 — that the school inform him in advance when certain topics would be coming up, so he could determine if his children should avoid those lessons.

“My client says certain issues are religious issues,” Polizogopoulos told the Court, and that it is his responsibility to teach his children about those issues, such as same-sex “marriage” and abortion, according to their Greek Orthodox faith.

Polizogopoulos described Tourloukis’ motivation as: “I have a religious obligation to shield my kids from false teaching. If I don’t, I am failing as a parent and I am committing a sin.”

Tourloukis did not object to his children receiving factual information, or to students talking about these matters, but wanted to know when and how these would be conveyed in the classroom, because teachers are authority figures “and hold a very special place in the eyes of children.”

But “his request never stood a chance,” Polizogopoulos said, because “the teachers in the school had been provided with a document telling them how to reject that request.”

Tourloukis’s request came in the wake of then-Education Minister Kathleen Wynne’s 2009 Equity and Inclusive Education Strategy, which purported to create a neutral, safe, accepting and welcoming environment for all students, including those identifying as LGBTQ or from same-sex parented homes.

A 2010 HWDSB instruction manual stated the board did not “condone” children being removed from classes on homosexuality. As reported earlier by LifeSiteNews, the document outlined “quick responses” for teachers to counter parents’ objections to “anti-homophobia” curriculum, such as: “This is not about parent rights. Children have the right to an inclusive education free from discrimination.”

“The only thing the school board considered, in my opinion, was the feelings of these hypothetical kids in class who might be offended by the applicant’s kids leaving,” even though it had no evidence of any child being offended, Polozigopoulos told the Court.

“The school’s erroneous or speculative belief that other kids would be discriminated against led them to say ‘no exception’,” he noted.

Nor did the board even consider that Tourloukis’ Charter right of religious freedom might be engaged, the lawyer argued. Instead, he was told he could withdraw his children from public schools and enrol them in Catholic or private schools, or homeschool them.

Schools mandate tolerance — for some

Board lawyer Mark Zega stated that Tourloukis has a right to public education, but no right to “impose his religious” views by “sending a message somebody else’s lifestyle is not acceptable.”

Leaving the classroom “conveys a message of non-acceptance that can’t be accepted in a public school system where tolerance is a statutory objective,” Zega told the Court.

But Polizogopoulos argued his client’s request for religious accommodation predates that legislation, passed in June 2012.

He added that there are “multiple examples of parents receiving accommodation” for religious reasons, but Tourloukis’ request has seemingly run up against “the school’s perceived obligation to discourage homophobia.”

“If it does, we may have bigger issues here.”

Tourloukis told reporters after the hearing that he was “a little bit disappointed in how things were presented in the court.”

“I don’t mind my children being exposed to factual information,” he emphasized. “I’m not advocating for ignorance and I’m not trying to censor other children.”

Added Tourloukis: “I only objected to them teaching their subjective opinion to my children on certain topics.”

Board lawyer Zega had argued his request was vague and “framed in a way where it is impossible to manage,” and EFTO lawyer Hughes claimed it was “not only unreasonable, but also unfeasible” because equity and inclusivity issues that can feature LGBTQ lifestyle are embedded throughout the curriculum.

But Tourloukis says his “request is not unique.” The board has two policies requiring it to give parents advance notice of what is being taught, and its own equity consultant told the school to honour his request, he told reporters.

Moreover, the “exact same written request that I submitted has been honoured by other school boards across Ontario,” he said, and by other principals within his own board.

“The HWDSB’s refusal to give me advance notice is scandalous.”

Iacobelli says he finds it “inexcusable” and “absolutely astonishing” that the Wynne government “has intervened to prevent a father from being able to excuse his children from lessons that offend his family’s religious beliefs.”

If Tourloukis loses, he added, “the state will have a judicial precedent authorizing it to take away everyone’s parental rights.”

And while the government and the school board use taxpayer money “to undermine and do away with parental rights,” the “parents who want to legally fight back must raise the funds on their own,” Iacobelli pointed out.

“The case so far has cost over $60,000. This is wrong financially, morally and legally,” he said, adding that as chair of PRIEDF, “I believe we must take action to defend these rights before they are gone for good for our children and ourselves.”