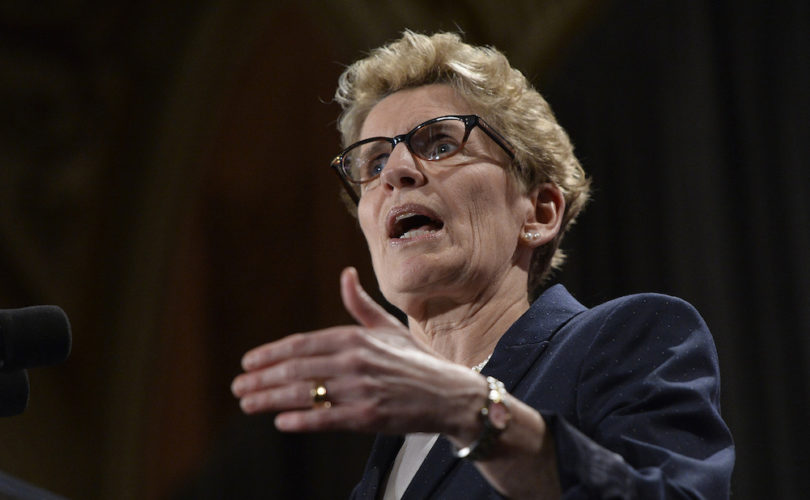 June 30, 2016 (LifeSiteNews) — If anyone doubts that Kathleen Wynne’s Liberal government will overrule parental rights in favour of its inclusivity agenda on behalf of LGBTTIQ — lesbian, gay, bisexual, transgender, transsexual, two-spirited, intersex, queer and questioning — students and parents, the evidence — literally — points clearly and abundantly to the fact that it will, and is.

And if anyone doubts that teachers in the public school system are encouraged to bring up references to LGBTTIQ issues in any and all subjects at their discretion, because equity and inclusivity is embedded in the curriculum, again, the evidence is in.

That evidence is found in the opposition factums in the Steve Tourloukis case, heard June 23 by Ontario Superior Court Justice Robert Reid, and in which the Wynne Liberal government intervened on behalf of the Hamilton-Wentworth District School Board, as did the Elementary Teachers Federation of Ontario.

“Requests to exempt students from the very portions of the curriculum that promote diversity, inclusivity and acceptance cannot be granted without the risk of appearing to endorse the non-acceptance of students of other races, sexual orientations, family backgrounds, gender expression and gender identities,” states the Attorney General of Ontario’s factum. (Download the full factum here.)

“Children who are themselves LGBT, who had LGBT parents, family or friends, or who had experienced homophobic or transphobic bullying based on being perceived as LGBT, could feel less valued and accepted if the Applicant’s children left the room every time people like them or their family or friends were discussed,” stated the document, submitted by lawyers Josh Hunter and Emily Bala.

The government lawyers argued that, given “the Legislature’s pressing and substantial objective of ensuring that public schools are accepting, inclusive, and diverse,” it follows that “permitting the Applicant’s children to leave the classrooms whenever planned lessons communicate acceptance of different family backgrounds, sexual orientations, gender identities or gender expression would undermine that Legislative purpose.”

“How could the Board provide an accommodation that would forbid a teacher from stating that there is nothing wrong with same-sex marriage and allowing a child to leave class every time such a topic arises, when the Board is required to discourage homophobia in schools?”

This, he stated, “would amount to an implicit condemnation of person who have suffered prejudice and stereotyping, and who have been singled out on the basis of their sexuality.”

Tourloukis, as readers may know, is the Hamilton dentist and father of two who asked his public school to give him advance notice when teachers would be presenting on a number of sensitive subjects, so he could decide if his children could opt out, if they risked being exposed to “false teaching” according to their Greek Orthodox faith.

When Hamilton-Wentworth District School Board refused his request, Tourloukis launched a legal action in 2012, asking for court declarations that he has final say over what his kids are taught in school, and that the school board’s refusal to give him advance notice violates his Charter rights.

The board told Tourloukis he was free to remove his children from public school, and enrol them in Catholic or private school or homeschool them.

Since his initial request six years ago, when his daughter was in JK and his son in Grade 2, Tourloukis has repeatedly insisted he does not object to his children learning the facts.

What he wants is “advance notice if the teacher is going to be presenting their subjective opinion as fact. It’s the value judgements,” he said, according to the HWDSB factum. “I think that presenting a value judgment as a fact is intellectually dishonest.”

Embedded in the curriculum

But according to opponents’ evidence, discussions of same-sex “marriage,” or indeed, anything related to LGBTTIQ issues or lifestyles could arise in any subject, at the teacher’s discretion.

Indeed, Tourloukis was informed “that all educational materials could potentially conflict with his stated objective, as equity and inclusivity principles are integrated and embedded within Ontario public education and within the Board,” noted the board’s factum (emphasis added).

The Ontario government argued the same.

If the Tourloukis children were permitted to opt out at their father’s request, they could end up “missing a substantial portion of the school year given the breadth of the Applicant’s religious objections, including in particular the fact that principles of equity and inclusive education are embedded throughout the curriculum the Board is mandated to teach to all its students” (emphasis added).

That LGBTTIQ issues could be raised in any subject is clear from the 2014 update of the Equity and Inclusive Strategy (EIE), first introduced in 2009 under then education minister Kathleen Wynne, herself a lesbian “married” to another woman.

The EIE Strategy aims to help school boards move “beyond tolerance and celebration to inclusivity and respect,” stated the Attorney General’s factum.

The updated guidelines “note that the principles of equity and inclusivity need to be reflected throughout the curriculum and learning materials so that students can ‘see themselves reflected in the curriculum’.” One example is “using texts written by gay/lesbian authors.”

Another example, stated the factum, is “the 2015 Health and Physical Education curriculum” itself, which “states that learning activities and materials must reflect the diversity of society, so that all students can see themselves reflected in the curriculum.”

When then-Premier Dalton McGuinty was preparing to implement the EIE Strategy, he promised parents they would be able to withdraw their children from any class they found objectionable for religious reasons.

Indeed, his education minister Kathleen Wynne stated in an April 17, 2008 letter: “Should the component of any course conflict with a religious belief of the parent (of minor-age children)… the right to withdraw from that component of the course shall be granted, on the written request of the parent.”

But the Liberals were soon backpedalling on that promise.

In September 2012, Education Minister Laurel Broten told LifeSiteNews that because “inclusive and equitable” education was embedded across the curriculum, withdrawals were restricted to high school health and physical education.

“Inclusive and equitable education,” as well as topics such as financial literacy and environmental stewardship,“are integrated and embedded across all curricula so that learning may be built and reinforced in a variety of age and grade appropriate contexts,” she said then.

“That means that it’s not just on one day that students are learning about how to be more environmental conscious or how to be more accepting and inclusive.”

Significance of the Tourloukis case

According to Jack Fonseca, project manager with Campaign Life Coalition, which is part of a parental rights’ coalition protesting the Liberals’ sex education curriculum, “We can’t overstate the importance of this lawsuit for the defense of parental rights.”

“If the judge rules in favour of the school board/Wynne government, moms and dads across Ontario will lose their fundamental right to guide the moral education of their own children,” he told LifeSiteNews.

“Let’s be clear,” Fonseca stated. “The agenda of the Liberal government and of the liberal educational establishment that it funds, is the farthest thing from neutral.”

The Wynne Liberals, he observed, “view parents as the problem – an obstacle to the ideological colonization they desire. Their agenda is to ‘liberate’ children from what they believe to be the sexually ‘repressive’ moral and religious beliefs of their parents.  In other words, this is state propaganda. It is indoctrination.”

Moreover, the Liberals have “spent, by my calculations, at least half a million dollars of taxpayer money to pay for six lawyers to fight this dad in court. All the legal fees paid by the HWDSB, the ETFO and the Liberal government came from public tax dollars.’

Added Fonseca: “I can think of few more disgusting ways to abuse taxpayers than by using their own money to pay an army of lawyers to fight them in court.”

Albertos Polizogopoulos, lawyer for Tourloukis, argued June 23 that other Ontario boards, and other schools within the HWDSB, had honoured numerous requests’ similar to his client’s, that the HWDSB refusal to do so violates its own policies to provide advance notice if a parent asked, that the board’s own equity consultant advised the school to honour Tourloukis’ request, and that Bill 13, on which his opponents based several of their arguments, came in force after his client’s 2010 requests.

“Given the monumental importance of this case,” Fonseca noted, “and the very real possibility that the ruling will be appealed by one side or the other, we encourage concerned citizens to donate to Tourloukis’ legal defense fund so that he can keep fighting all the way to the Supreme Court.”