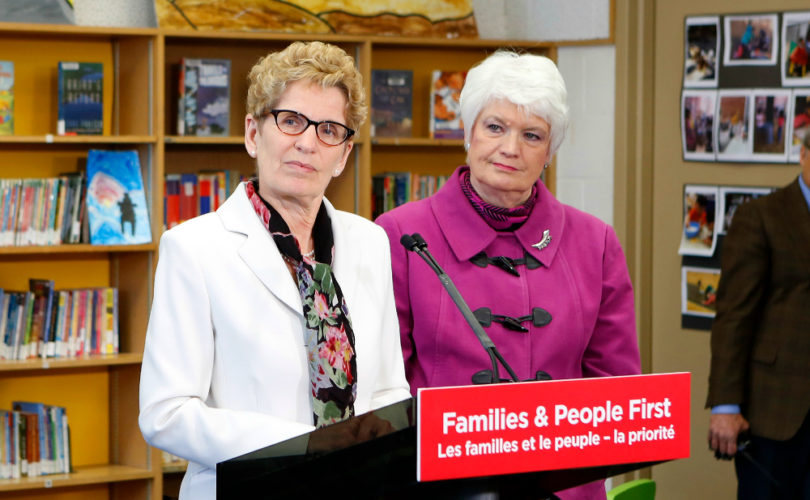 TORONTO, June 5, 2015 (LifeSiteNews) — The Ontario Liberal government has launched a $1.8 million ad campaign claiming to inform people about the revised sex-ed curriculum set to be rolled out this fall, but pro-family advocates say it’s actually a whitewash of a controversial program opposed by thousands of parents.

The ads, produced by ZenithOptimedia, are currently airing on radio and are scheduled to run through the summer. The Ministry of Education did not make details of the campaign available to LifeSiteNews, and ZenithOptimedia was not able to comment.

Nilani Nogeswaran, spokesperson for Minister of Education Liz Sandals, said the ad campaign was not a response to the controversy surrounding the sex-ed curriculum.

“We do public awareness campaigns all the time on different things, just like any government,” she told LifeSiteNews, pointing to such precedents as the campaign to let parents know about childcare options. “It’s about informing them to ask the right questions and what are the options and things available for them.”

Gwen Landolt of REAL Women of Canada says the campaign shows that the Liberal government “is concerned about the adverse publicity it has received because of the curriculum and is deceitfully concealing from the public the contents of the curriculum.”

The ads Landolt heard depict the sex-ed curriculum as a “wonderful help to children, and young adolescents. It’s all about health and consent, all very positive, and never mentions all the sex education.”

“Taxpayers are paying for this,” she told LifeSiteNews. “What’s so deeply offensive is the deceit of it, to pretend that it’s not controversial.” The sex-ed curriculum is not the same as childcare, Landolt added. “They can talk about childcare and give the facts, but this is not factual.”

Matt Wojciechowski, spokesperson for CLC, says Premier Kathleen Wynne’s Liberals are “proving once again that they are not listening to Ontario families and parents. The 1.8 million tax dollars they spent on this deceptive ad campaign is a complete slap in the face to concerned parents.”

“At the same time,” he said, echoing Landolt, “this shows that the Liberals feel threatened by the growing opposition to this radical sex-ed program. And they should be.”

Indeed, as part of its mobilization against the Liberals’ radical sex-ed agenda, the CFA has organized a sit-in and march at Queen’s Park in Toronto this Sunday, June 7. It’s expected that upwards of 10,000 concerned Ontarians will attend.

On June 1, CFA delivered a petition to Queen’s Park signed by 185,000 people asking for repeal of the sex-ed curriculum, which MPP Monte McNaughton presented to the legislative assembly.

Meanwhile, the taxpayer-funded Liberal government ad campaign on the curriculum will “mislead the public, not educate or inform,” Landolt emphasized. “People who have no knowledge of the controversy will think, ‘Oh, that’s very positive.’…The government’s deception about the curriculum is a betrayal of the public trust.”

“This isn’t about education,” added Wojciechowski. “This is about pushing forward an agenda that Wynne will not back down from. If this were about education, the government would be spending money on solving real issues, like the ongoing teacher strikes.”