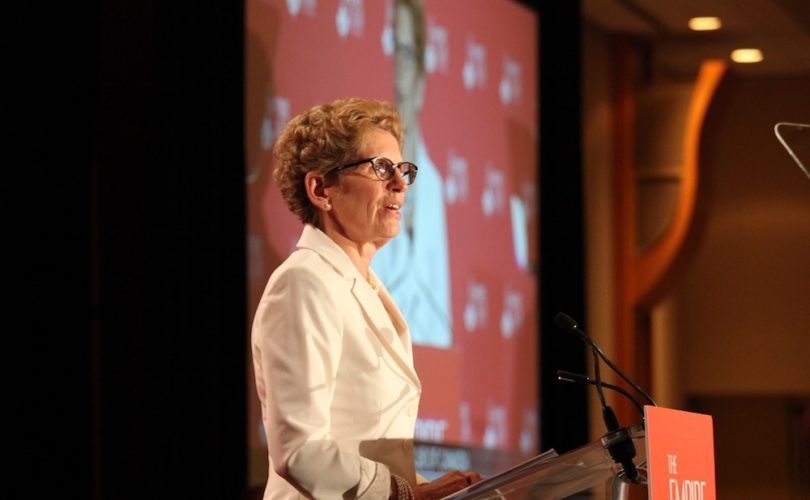 And the Tory MPP in question, Monte McNaughton, charges that Wynne is just trying to duck the “chaos” in the school system that she and her Liberal government created as a result of her radical sex-ed program.

Wynne criticized McNaughton as “irresponsible” for speaking last week at a London parents’ information session on homeschooling, telling the Toronto Star’s Richard Brennan on Sunday that this meant the Tory backbencher was advising parents to pull their children from school.

“For an MPP at Queen’s Park … to be at a sort of ‘how to withdraw your kids from school’ seems pretty outrageous to me,” Wynne said, adding that PC Leader Patrick Brown “has obviously condoned what Monte McNaughton is doing.”

“Wynne’s condescending attitude towards parents who choose to homeschool betrays a belief that moms and dads should not be trusted with the care and education of their own children,” he told LifeSiteNews in an email. “It reveals a contemptuous attitude of government knows best, of teachers and government bureaucrats as co-parents.”

Fonseca contends that Wynne is “furious” because if parents pull their kids from school, there will be “fewer children to indoctrinate with her government’s libertine, promiscuity-pushing sexual values.”

“Those who have studied the sex-ed curriculum know that the reason it is pushing the edge with age-inappropriate, overly graphic sex education is because it has an agenda of sexual revolution,” Fonseca contended. “Wynne sees herself as a revolutionary and homeschooling families as an obstacle to total conquest.”

Moreover, statistics show that homeschooled children academically outperform their public school counterparts, he noted. “Wynne should acknowledge this failure of the publicly funded system and be more supportive of homeschooling.”

Christina Liu of the Toronto branch of the Parents Alliance of Ontario (PAO) says Wynne’s accusation that “MPP Monte McNaughton is trying to weaken the public education system” is “really unfair.”

“Parents have the right to choose their system,” she told LifeSiteNews. Liu added that for many parents, opting for homeschooling or private school is “a very reluctant choice. It involves tremendous energy and a tremendous financial burden.”

So it’s not that parents “want to weaken the public education system,” she pointed out, but “parents are totally frustrated and disappointed” with that system and the Liberals aren’t listening to them.

Paul Faris, president of the London-based Home School Legal Defense Association (HSLDA), told LifeSiteNews that PAO invited him to speak August 4 on homeschooling as an option “in light of the sex-ed curriculum.”

“We as an organization don’t take a position on the sex education curriculum good or bad, because it’s in public school, which is not our balliwick,” Faris told LifeSiteNews in a telephone interview. “Our role is simply to support parents if they decide to homeschool…and if they choose that, to help them do it successfully.”

Faris noted that Wynne confirmed in the Toronto Star article that parents have the right to homeschool.

“I applaud Premier Wynne for really acknowledging that parents have the right to educate their children at home,” he said, “and I applaud McNaughton for supporting families as they consider their choices including home education.”

Anything beyond that is “more about politics and the sex-ed issue than about the homeschooling.”

“This is just the Kathleen Wynne plan to deflect from [the Liberals’] controversial sex education curriculum,” the MPP for Lambton-Kent-Middlesex told LifeSiteNews in a telephone interview.

“The education system is in complete chaos, and that responsibility and blame lies at the feet of the Kathleen Wynne government,” he added. “Whether it’s kids coming home with no report cards to the division we’re seeing because of their controversial sex-education curriculum,” the Liberals are “forcing parents to make decisions for what’s in the best interests of their kids.”

And parents will do just that, asserted McNaughton, a staunch critic of the sex-ed agenda and father of two-year-old daughter. “I trust moms and dads to make decisions for their children’s education better than any Liberal politician in Ontario.”

PC Leader Patrick Brown was out canvassing and did not return a call from LifeSiteNews by deadline, but McNaughton pointed out, “We’ve been very clear that we want to go back to the drawing board and ensure that parents have a voice.”

He brought a petition to the legislature in June signed by 185,000 people that asked for a repeal of the sex-ed curriculum and meaningful consultation with parents. “There’s widespread opposition to this.”

McNaughton also wrote Education Minister Liz Sandals August 4 reminding her of that petition, and urging her to “immediately stop the implementation of the new sex-ed curriculum.”

He reminded Sandals that the province’s elementary teachers “are not participating in sex-education training under the current work-to-rule campaign.”

“I can assure Kathleen Wynne and everyone in Ontario one thing,” he told LifeSiteNews. “I’m not going to give up in standing up for parents opposed to this curriculum.”