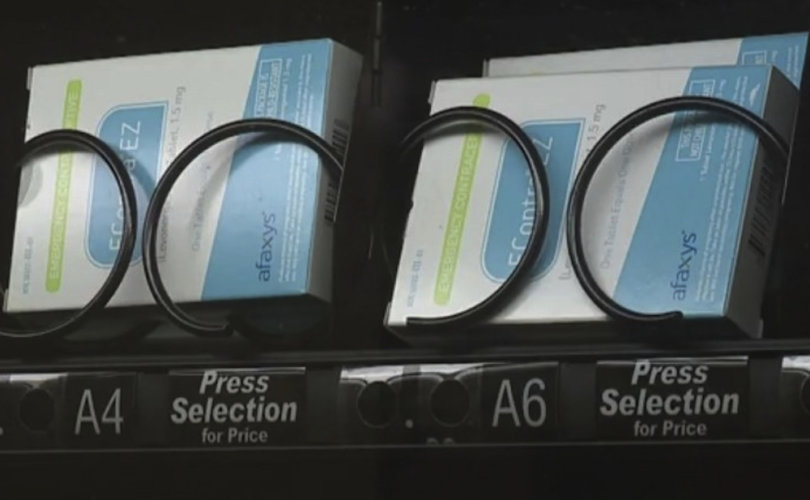 A 'Wellness to Go' vending machine dispenses an abortion drug at UC-Davis.

NEW HAVEN, Connecticut, December 11, 2018 (LifeSiteNews) – Students at Yale University’s Silliman College will soon be able to obtain condoms, lubricant, and even abortifacient “emergency contraception” as easily as putting some money in a vending machine.

A so-called “wellness to-go” vending machine will be installed in the campus’s Good Life Center before winter break, the school newspaper Yale Daily News reported. Accessible 24 hours a day and seven days a week, the machine will offer the Plan B morning-after pill, condoms, lube, and other over-the-counter medications.

Plan B is already available for free to students with Yale’s Hospitalization/Specialty Care Coverage plan, and Yale spokeswoman Karen Peart says “emergency contraception” can be obtained for free at Yale Health Pharmacy or at Acute Care regardless of what insurance plan someone has.

But student Grace Cheung, who first proposed the machine, argued that Plan B isn’t covered by the school’s basic insurance plan, and that students seeking it shouldn’t have to go through the “humiliating process” of purchasing it.

“The point of this is to make Plan B more accessible and to make medications in general more accessible,” said student Ileana Valdez ’21, a Yale College Council (YCC) representative who pushed for the machine. “Hopefully, this will set a precedent for more machines to show up around campus that contain other things so Yale students don’t have to go out of their way to go to CVS, especially students from the new colleges.”

Melanie Boyd, the college’s Assistant Dean of Student Affairs, told the paper she was “glad that the YCC is working to publicize awareness of the easy availability of Plan B at Yale Health.”

The “wellness” machine will charge a price “comparable to or lower than” that of pharmacies for Plan B, according to the Daily News. CVS and Walgreens list $50 for a single pill; both companies offer a variety of other contraceptive products for significantly cheaper.

More significantly, however, Plan B doesn’t simply prevent fertilization; it can function by killing an already-conceived embryonic human depending on when it’s taken.

“If Plan B is taken five to two days before egg release is due to happen, the interference with the LH signal prevents a woman from releasing an egg, no fertilization happens, and no embryo is formed,” explains Dr. Donna Harrison of the American Association of Pro-Life Obstetricians and Gynecologists.

Many Plan B defenders point to this mechanism to paint it as an alternative to abortion, but Harrison notes that if Plan B is taken during the “two-day window in which embryos can form but positive pregnancy tests don’t occur,” studies indicate it “has a likely embryocidal effect in stopping pregnancy.”

The U.S. Food and Drug Administration’s online guide to birth control methods admits that Plan B “may also work (…) by preventing attachment (implantation) to the womb,” resulting in the death of an embryonic human being.

Other methods are similarly fraught with controversy. More and more women have begun speaking out over the past few years about negative physical and mental reactions to birth control pills. Oral contraceptives have been linked to an 80 percent increased likelihood of depression and as much as a sixfold rise in the risk of thrombosis, as well as heightened risks of blood clots, hair loss, Crohn’s disease, brain shrinkage, breast cancer, hardening of the arteries, glaucoma, and cervical cancer.

Responding to the news, the Family Institute of Connecticut faulted the college for framing the machine as offering “emergency contraception” without informing women the pills may cause abortions rather than prevent them.

“Do parents send their high-achieving children off to this top Ivy League school to read the classics, engage in challenging intellectual debate, rub elbows with some of the nation’s top academics and lay the path for a successful and bright career, or to be indoctrinated with godless SJW ideology and engage in casual sex?” asked Elizabeth Johnston of the Activist Mommy blog.

At Breitbart, Dr. Susan Berry observed that data indicate the “safe sex” trend is leaving America’s children far less safe. “As recently as August, CDC released data revealing the number of cases of STDs had skyrocketed for the fourth consecutive year,” she wrote. “Of the 20 million new STDs reported each year, about half occur among young people between the ages of 15 to 24.”

Over the past several years, similar Plan B vending machines have been installed at several institutions of higher education across the country, including Stanford University, Brandeis University, and the University of California-Davis.