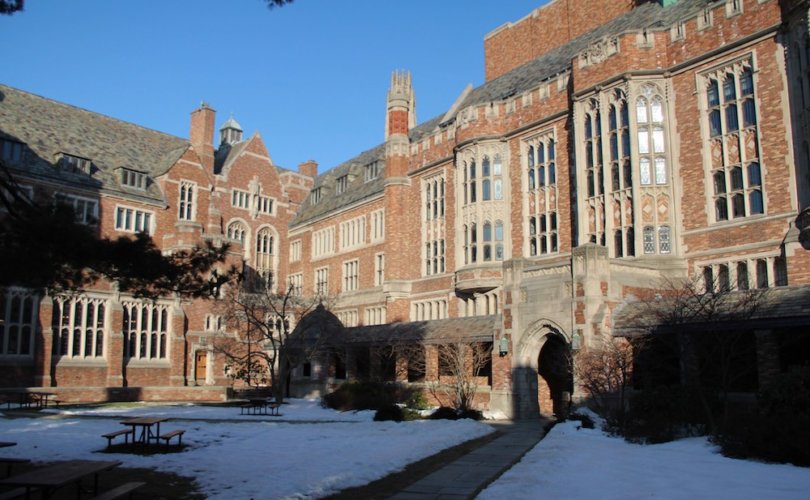 April 3, 2019 (LifeSiteNews) – In the latest reminder that traditional Christian values are increasingly unwelcome in modern academia, Yale Law School has reportedly excluded students who work at organizations that stand by Biblical teachings on homosexuality from several financial support programs.

Aaron Haviland, a Yale Law student and Marine Corps veteran, reports at The Federalist that on March 25, the school announced its “nondiscrimination” policy was being expanded to summer public interest fellowships, post-graduate public interest fellowships, and loan forgiveness for careers in public interest. Specifically, these resources would no longer be made available to students and graduates who joined organizations that supposedly “discriminate” on the basis of “sexual orientation and gender identity and expression.”

“Yale Law School does not and should not support discrimination against its own students, financially or otherwise,” declared a unanimous recommendation from Yale’s Public Interest Committee. “Obviously, the Law School cannot prohibit a student from working for an employer who discriminates, but that is not a reason why Yale Law School should bear any obligation to fund that work, particularly if that organization does not give equal employment opportunity to all of our students.”

The move came a month after the campus LGBT group Outlaws raised objections to the Yale Federalist Society inviting an Alliance Defending Freedom (ADF) attorney to discuss the Masterpiece Cakeshop case. Outlaws called on the school to both “clarify” its admissions policies for students who agreed with ADF and deny financial support to students who take summer jobs or fellowships with such groups.

Haviland explains that in emails to students, Yale administrators have claimed the policy (the details of which have not yet been finalized) will only apply to organizations’ hiring practices, not their policy positions or stated values.

However, this may still disqualify working for Christian organizations who require employees to affirm they live by Christian values. ADF, for instance, has a statement of faith which has among its requirements the conviction that “all forms of sexual immorality (including adultery, fornication, homosexual behavior, polygamy, polyandry, bestiality, incest, pornography, and acting upon any disagreement with one’s biological sex) are sinful and offensive to God.”

“Yale’s only assurances that the policy will be limited to hiring practices, and not applied to policy positions, are private emails sent to individual students,” Haviland argues. “This is not enough. What ultimately matters is the text of the policy,” which “was obviously a response to ADF.

“Without naming ADF, Yale has found a roundabout way to functionally blacklist them and other organizations that do not adhere to Yale’s progressive understanding of gender identity,” he continues. “Law students and graduates will still receive funding to work at organizations like the American Civil Liberties Union that defend abortion, for example. But if students and graduates want to work for ADF or other similarly situated religious or conservative organizations, they will get no help.”

Finally, Haviland suggests this move opens the door to Yale caving to even more extreme demands by campus leftists. “Progressive students are attempting to shrink the Overton Window of reasonable public discourse,” he warns, “and Yale seems all too willing to comply.”