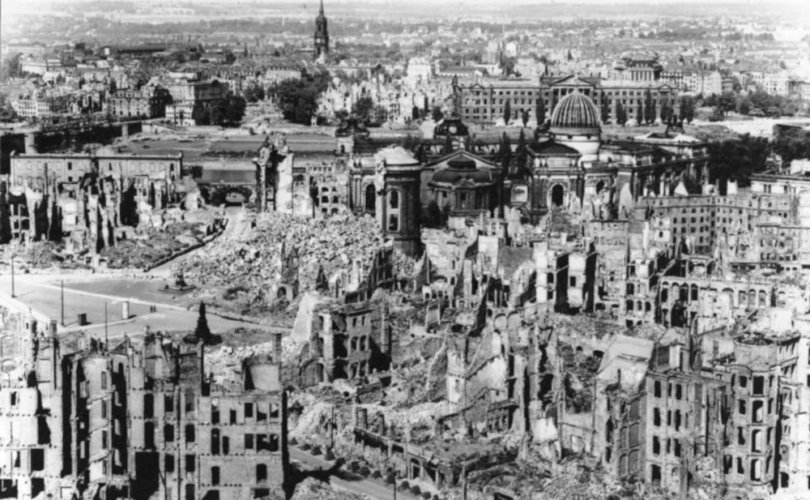 Dresden after the bombing during World War IIBundesarchiv

November 4, 2020 (LifeSiteNews) — A Yale professor depicted in the media as an expert on mental health is insinuating on Twitter that pro-Trump parts of the United States be metaphorically “leveled” to break the “spell” President Donald Trump holds on large swaths of the American electorate. He thus offered a hint at the treatment that may be in store for conservative Americans should former Vice President Joe Biden take the reins of the federal government.

Bandy X. Lee is a forensic psychiatrist at Yale School of Medicine and president of the World Mental Health Coalition (WMHC). On October 28, she relayed the comments of a descendant of World War II-era German refugees, who justified the Allied firebombing of Dresden on the grounds that “nothing short of the sight of SEEING THEIR CITIES LEVELED would have broken the spell” Adolf Hitler had cast over the people of Germany.

“Needless to say, we are seeing the same phenomenon here,” Lee added, “and every day that Donald Trump has exposure to the public, he spellbinds his followers ever more deeply, as mental health experts are precisely the ones banned from comment.”

A reporter whose grandparents were refugees from Nazi Germany related to me: “I cannot help but remember a conversation I had with my grandfather … about the firebombing of Dresden, whether he thought the Allies should be reproached for targeting civilians….

Needless to say, we are seeing the same phenomenon here, and every day that Donald Trump has exposure to the public, he spellbinds his followers ever more deeply, as mental health experts are precisely the ones banned from comment.

On November 1, Lee followed up by clarifying she was not advocating for literal bombings of Republican cities, apparently in part because “I do not believe even leveling a city would have changed hearts”:

He went ahead and published it anyway. Now I am receiving a barrage of hate mail—I feel bad for how gullible they are, but it comes to show what little morals right-wing “reporters” have, and how willing they are to play the audience they are supposedly serving.

While presumably few readers, if any, ever thought Lee wanted to literally murder Americans, her comments reinforce the far-left memes that Trump is somehow comparable to a Nazi dictator and that intelligent, well-meaning voters could not rationally support him without some sort of brainwashing. They also hint at prevalent desires in left-wing institutions (such as academia) to punish and stigmatize conservatives into conformity.

Lee and her organization have a history of claiming, on the basis of their presumed medical expertise, that Trump is mentally unwell. She went so far as to declare last month that the president “meets criteria for a locked psychiatric facility.”

The American Psychological Association’s Goldwater Rule states that “it is unethical for a psychiatrist to offer a professional opinion unless he or she has conducted an examination and has been granted proper authorization for such a statement.”