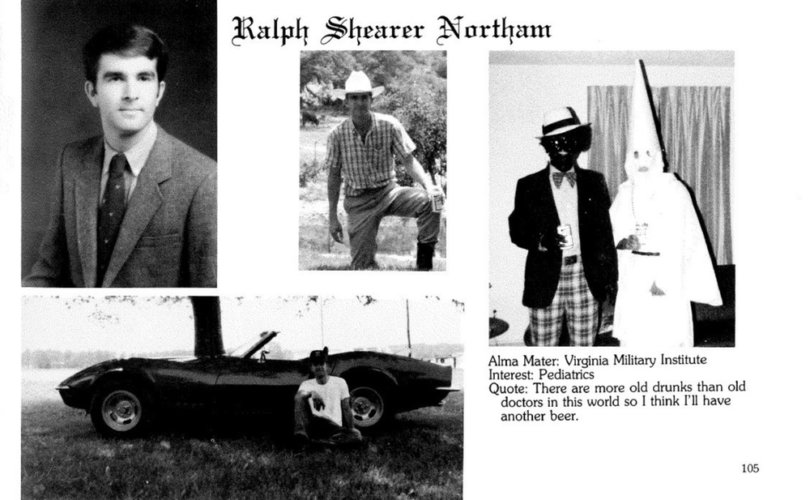 UPDATE at 8:59 p.m. EST on February 1, 2019: Gov. Northam has released a video on Twitter apologizing and saying he is committed to fighting for all Virginians for the “remainder of my term.” Ryan Saavedra of The Daily Wire has tweeted that the president of the NAACP and 2020 Democratic presidential candidate Sen. Kamala Harris, D-CA have said Northam should resign. According to Saavedra, two Democrat Congressmen have also said Northam should resign.

My fellow Virginians, earlier today I released a statement apologizing for behavior in my past that falls far short of the standard you set for me when you elected me to be your governor. I believe you deserve to hear directly from me. pic.twitter.com/1rSw1oxfrX

UPDATE at 6:28 p.m. EST on February 1, 2019: Gov. Northam has admitted he appears in the photo, but does not say whether he is the one in alleged blackface or dressed as a KKK member.

His full statement is as follows:

“Earlier today, a website published a photograph of me from my 1984 medical school yearbook in a costume that is clearly racist and offensive.

I am deeply sorry for the decision I made to appear as I did in this photo and for the hurt that decision caused then and now.

This behavior is not in keeping with who I am today and the values I have fought for throughout my career in the military, in medicine, and in public service. But I want to be clear, I understand how this decision shakes Virginians’ faith in that commitment.

I recognize that it will take time and serious effort to heal the damage this conduct has caused. I am ready to do that important work. The first step is to offer my sincerest apology and to state my absolute commitment to living up to the expectations Virginians set for me when they elected me to be their Governor.”

VIRGINIA, February 1, 2019 (LifeSiteNews) – Virginia Gov. Ralph Northam, already under fire for his comments defending infanticide on Wednesday, is now facing scrutiny over a medical school yearbook photo showing a man allegedly in blackface and a man dressed in Ku Klux Klan garb. The photo is on a half-page spread under his name and next to photos of him, but it’s unclear who is pictured.

Northam’s office did not immediately return requests for comment from various news outlets such as the Washington Post and the Virginian-Pilot Friday afternoon.

“I can confirm that the picture in question does appear in a 1984 student-produced publication. The EVMS library is open to the public and does provide access to its materials,” an Eastern Virginia Medical School spokesperson told WUSA9 reporter Mike Valerio. “We don’t know when or where this photo was taken but it is from the 1984 yearbook. We promote a culture of inclusion and our principle mission is to recruit, educate, [and] train a culturally competent healthcare workforce.”

The Virginia Republican party has demanded an explanation from Northam and snarkily tweeted that it was “not surprised” Northam hadn’t tweeted about the first day of Black History Month today.

“Racism has no place in Virginia. These pictures are wholly inappropriate. If Governor Northam appeared in blackface or dressed in a KKK robe, he should resign immediately,” Republican Party of Virginia Chairman Jack Wilson said.

“This is a deeply disturbing and offensive photograph in need of an immediate explanation by the Governor,” Virginia Republican General Assembly leadership said in a statement.

At least one of Northam’s Democrat colleagues, Senate Minority Leader Richard L. Saslaw, seemed to suggest in a statement to the Washington Post that he believes the photo does show Northam. However, he said there was “[probably] no one in the General Assembly who would like their college conduct examined.”

“His whole life has been about exactly the opposite and that’s what you need to examine, not something that occurred 30 years ago,” said Saslaw (D-Fairfax). “While it’s in very poor taste, I would think there is [probably] no one in the General Assembly who would like their college conduct examined. I would hate to have to go back and examine my two years in the Army. Trust me. I was 18 years old and I was a handful, [okay]? His life since then has been anything but. It’s been a life of helping people, and many times for free.”

Virginia Democrats’ bad week began when Del. Kathy Tran admitted that her now-defeated late-term abortion bill would have allowed abortion even as a mother was “dilating” and going into labor.

Northam then defended her comments.

Northam is a former pediatric neurologist.

Planned Parenthood spent around $3 million helping Northam get elected. The organization’s founder, Margaret Sanger, was an avowed eugenist who wrote in her autobiography that she “accepted an invitation to talk to the women’s branch of the Ku Klux Klan.”

Northam also campaigned at an abortion facility when he was running for governor.