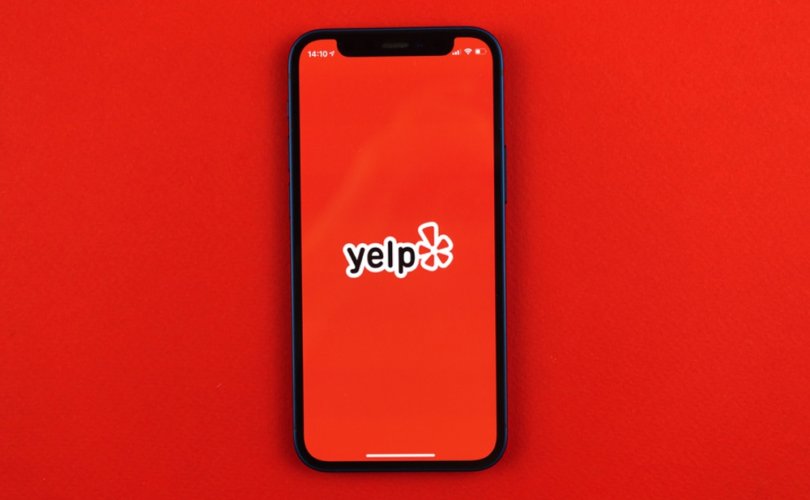 The San Francisco-based company announced the move in an exclusive interview with Axios on August 23.

According to the report, Yelp is now flagging both faith-based and non-faith-based crisis pregnancy centers by adding a label telling users that the organizations “provide limited medical services and may not have licensed medical professionals onsite.”

Axios noted that the decision is “the latest in a series of move[s] Yelp has made since 2018, when CEO Jeremy Stoppelman directed the company to make sure crisis pregnancy centers were differentiated from abortion clinics in the company’s listings.”

WOW: in a post Roe world, where it is harder for women to get abortions, Yelp is actively turning women away from crisis pregnancy centers that would offer them help, assistance, and empower them to carry their unborn child to term. https://t.co/qYGBpa7Grs

Yelp vice president of user operations Noorie Malik praised the decision in remarks made to the outlet via email.

“After learning about the misleading nature of crisis pregnancy centers back in 2018, I’m grateful Yelp stands behind these efforts to provide consumers with access to reliable information about reproductive health services,” Malik said.

“It has always felt unjust to me that there are clinics in the U.S. that provide misleading information or conduct deceptive tactics to steer pregnant people away from abortion care if that’s the path they choose to take,” she added, noting that Yelp will also throttle the reach of the pregnancy centers on the platform so that the organizations won’t appear in the company’s search results for abortion-seeking women.

— Article continues below Petition —
PETITION: Stop Walmart from pushing abortion for employees
Show Petition Text
5395 have signed the petition.
Let's get to 6000!
Thank you for signing this petition!
Add your signature:
Show Petition Text

In response, some pro-life advocates have argued that it’s abortion facilities, not pregnancy centers, that have continuously “misled” women.

Meanwhile, Yelp isn’t the only company to take action against pro-life advocacy in the wake of Roe v. Wade’s demise at the hands of the pro-life U.S. Supreme Court majority in late June.

Last month, social media giant YouTube declared it was cracking down on so-called “misinformation” regarding abortion, giving rise to speculation from pro-lifers that the company will work to suppress the truth about abortion.

“Starting today and ramping up over the next few weeks, we will remove content that provides instructions for unsafe abortion methods or promotes false claims about abortion safety under our medical misinformation policies,” YouTube said in a July 21 statement.

According to YouTube’s “misinformation” policy, medical content “that contradicts local health authorities’ or WHO [World Health Organization] guidance on certain safe medical practices” will not be allowed on the site.

The WHO currently claims that “Induced abortion is a simple and common health-care procedure” that “is safe when carried out using a method recommended by WHO, appropriate to the pregnancy duration and by someone with the necessary skills.”

In addition to actively suppressing pro-life content, many corporations have opted to help cover travel expenses for abortion-seeking women who live in pro-life states.

Most recently, retail giant Walmart told employees it will cover the cost of abortion and related travel expenses.

Under Walmart’s health care plans, the company will foot the bill for employees’ abortions “when there is a health risk to the mother, rape or incest, ectopic pregnancy, miscarriage or lack of fetal viability,” CNBC reported.