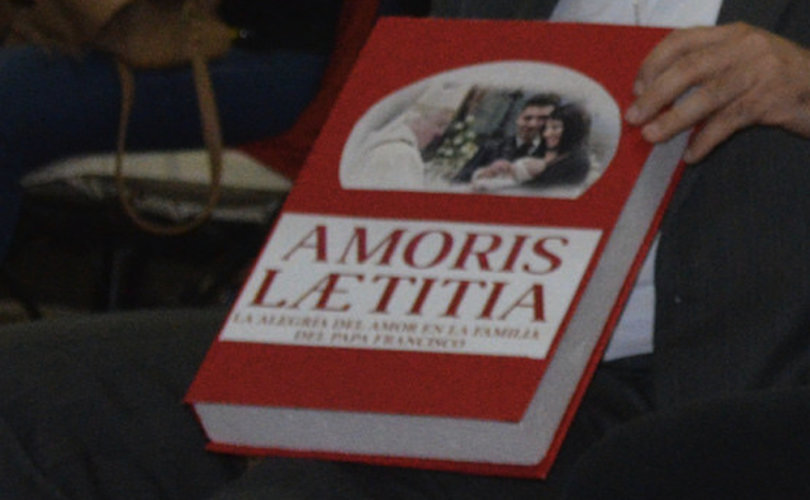 Update October 06, 2017: Dr. Robert Fastiggi and Dr. Dawn Eden-Goldstein have responded to Dr. Christian Brugger. And Dr. Brugger has responded to their response. The exchange can be read here: Theologians continue battle over meaning of Amoris Laetitia 303.

September 28, 2017 (LifeSiteNews) — Two Catholic theologians published an article earlier this week arguing that a major criticism of Pope Francis’ exhortation Amoris Laetitia (AL) is based on a faulty Vatican-rendered translation into English from Latin.

In their La Stampa article titled Does Amoris Laetitia 303 Really Undermine Catholic Moral Teaching?, Drs. Robert Fastiggi and Dawn Eden-Goldstein provide what they say is a more accurate translation of Amoris Laetitia paragraph 303. They argue that critics have raised alarm “precisely upon what the Latin text does not say.”

They have used their translation to cast doubt on the Filial Correction made public on the weekend that accused Pope Francis of propagating heresy. The Filial Correction lists AL 303 among the dozen passages found in the exhortation that the signers say serve to propagate heresy.

Paragraph 303 is where Pope Francis speaks about “irregular couples” living in a situation that does not “correspond objectively to the overall demands of the Gospel.”

Yet conscience can do more than recognize that a given situation does not correspond objectively to the overall demands of the Gospel. It can also recognize with sincerity and honesty what for now is the most generous response which can be given to God, and come to see with a certain moral security that it is what God himself is asking amid the concrete complexity of one’s limits, while yet not fully the objective ideal. In any event, let us recall that this discernment is dynamic; it must remain ever open to new stages of growth and to new decisions which can enable the ideal to be more fully realized.

Catholic philosopher Dr. Josef Seifert logically deduced from this paragraph that if Pope Francis believes that adultery — to quote the exhortation — “is what God himself is asking” of couples in “irregular” situations, then there is nothing stopping any other intrinsically evil act, such as contraception and homosexuality, from eventually being justified.

It was for this reason that he called Amoris Laetitia a ticking “theological atomic bomb” that has the capacity to destroy all Catholic moral teaching.

Dr. Christian Brugger also argued that AL 303 implies that God is “asking” some people “to live in a life-state in which they are objectively violating grave matter.”

But Drs. Fastiggi and Eden-Goldstein believe that critics “misread and distort” what Pope Francis is actually saying in AL 303. They write:

Our translation from the Latin shows that Pope Francis is clearly not saying that conscience may rightly discern that an objectively immoral act is not immoral. Instead, he is noting that in some complex and irregular situations a person’s conscience will recognize that God is asking for a generous response, indeed an oblationem, or offering, that moves in the right direction even though it does not completely rectify the objective irregularity of the situation.

…It is very clear from the Latin text of Amoris laetitia 303 that Pope Francis is describing how conscience can discern that God himself is asking for a small step in the right direction in the midst of a mass of impediments and limitations. The Holy Father is not saying that God himself is asking certain people “to continue to commit intrinsically wrong acts such as adultery or active homosexuality.” This is a most unfortunate reading of the text by Seifert. Instead Pope Francis is saying that in certain difficult situations God is asking for a “generous response” (liberale responsum), an offering (oblationem)—that is, a step in the right direction.

LifeSiteNews asked Dr. Christian Brugger, Senior Fellow of Ethics at the Culture of Life Foundation in Washington D.C., for an analysis of Fastiggi and Eden-Goldstein’s proposed translation. He responded with a small treatise that he asked be published in full.

He concluded after a detailed examination of the Latin text that Fastiggi and Eden-Goldstein’s proposed translation that would render AL 303 in a more orthodox light “is not justified by the text.”

I sympathize with Professors Fastiggi and Goldstein’s (FG’s) effort to read AL 303 in line with Catholic moral tradition.  Indeed, the effort is required of theologians whenever they read magisterial documents.  But if the obvious meaning of a text is contrary to a traditional Catholic teaching, there is no unfaithfulness to truth or the Church in elucidating it and identifying the points of departure from the traditional teaching.

FG believe that I and other critics of AL, Ch. 8, because we have followed the Vatican English (VE) translation, “misread and distort” what no. 303 actually says.  Working from the authoritative Latin, they provide their own English translation, which they believe—and I concur—is much more precise.  Their superior translation does not, however, change what in my judgment is the obvious meaning of AL 303.

They rest their argument upon two translational changes: first, “perfectum nondum sit obiectivum exemplar”, translated in VE as “not yet fully the objective ideal,” should be translated “not yet be the perfect objective model.”  They believe that when the Latin term “exemplar” (“model”) is understood in its full meaning, it will dispel the idea that what’s being set forward is some kind of unattainable “ideal”.

The second, “illam esse oblationem quam ipse Deus requirit”, translated in VE as “that it is what God himself is asking”, should be translated “this is the offering [“oblatio”] that God himself is asking”.  The failure of VE to translate “oblatio”, FG believe, has obscured the meaning of the text.  What remarried divorcees are giving to God is an “oblation” (an “offering”) by which they are (FG’s words) “mov(ing) in the right direction even though it does not completely rectify the objective irregularity of the situation”; they are making “a gift of self that moves toward God and the objective moral norm”.

FG believe these two demonstrate that AL 303, rather than envisaging a scenario where remarried divorcees live together in a sexually active marital-type relationship, practice perfect continence but cohabit for the sake of the children.  In their case the “civil ‘marriage’ does not correspond to the objective model of Christian marriage”, but the couple is not committing intrinsically evil actions.

Their reading is not justified by the text.  The paragraph in question reads:

(1) This conscience, however, can not only recognize a certain state [quendam statum] to be objectively at variance [obiective dissidere] with the universal command of the Gospel [universali Evangelii mandato]; (2) it can also recognize sincerely and honestly what may be [quod sit] the generous response owed to God in the present circumstances; (3) and this same firm conscience [firma conscientia] can come to understand with a certain moral certitude [quadam morali certitudine] that this [illam] is the offering that God himself is asking [oblationem quam ipse Deus requirit] … although it may not yet be the perfect objective model [perfectum nondum sit obiectivum exemplar]” (numbers added).

So the text teaches that conscience not only can recognize the failure of my objectively adulterous second union to meet Jesus’ universal command; it also can recognize that this statum—this objectively adulterous state—is the best I can give here and now; and that with a “firma conscientia” I can achieve “a certain moral certitude” that God is asking me to make an “oblatio” of this statum however far from the objective model of Gospel morality it may depart.

When the text refers to persons in civil unions not yet living up to the perfect objective demands of Gospel chastity, it is referring to civilly ‘remarried’ divorcees who are living in a sexually active marital-type relationships with someone other than their valid spouses.

It is these couples that the text is presently freeing to return to Holy Communion without requiring a radical emendation of life.